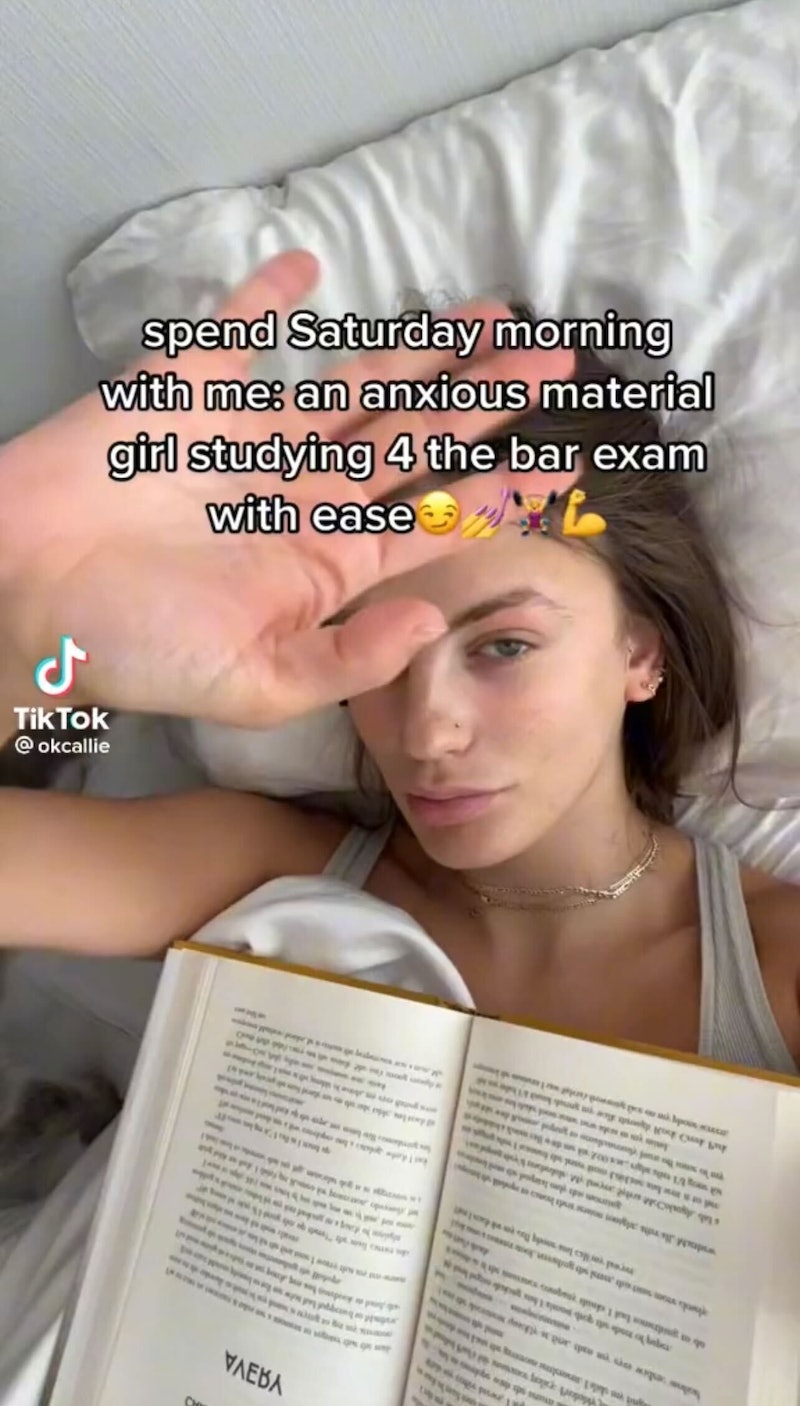 TikTok creators are getting in touch with their inner Elle Woods and posting videos sharing their law school journeys — specifically the strenuous bar exam experience. Becoming a lawyer isn’t as easy as the Harvard queen made it look in the 2001 classic. People have been following in Kim K’s footsteps by being more open and honest about sharing their law school experiences with millions on TikTok. During the summer of 2021, people began sharing their studying methods, where they were taking the exam, if they eventually passed or not, and even some of the anxieties they were experiencing. It was a small, yet safe corner of the internet that allowed law students and lawyers alike to connect with one another in an industry that can often feel isolating.

As of May 2022, when lawyers began to prepare for the nationwide July bar exam, this little corner evolved into a platform-wide takeover on TikTok, with the hashtag #BarExam garnering a whopping 137.2 million views. #LawTok, which now has over 1.4 billion views, has become an internet sensation, inspiring and informing people about the unknown legal world of becoming a lawyer. Keep reading to understand how the trend formed, how much a lawyer’s future depends on the successful completion of the bar, and what it’s like to share your law school journey with millions of followers.

What Is The Bar Exam?

The Bar Exam is your ticket to becoming a licensed attorney and practicing law. The UBE (Uniform Bar Exam) is administered in more than half of the states in the US, while only a few states administer state specific exams testing their own state laws and procedures. Test takers are given thirteen areas of law that you’re expected to know inside and out — rules, exceptions to the rules, and how to apply them to a specific set of facts. Sounds like the test from hell, right?

If you don’t pass the Bar Exam, you have to wait another six months to retake it as the exam is only offered twice a year — once in July and once in February. “There’s so much pressure to pass on your first shot — many students have jobs lined up that require a passing Bar score. But aside from the procedural matters, it’s really tough to imagine having to go through this type of thing more than once,” Megan Andrews, JD, content creator and future attorney said.

“While I expected a great feeling of relief after finishing the exam, that relief has yet to come for myself and many others, because we will not know if we passed for 3 to 4 months,” Callie Wilson, 2022 law school graduate and content creator said.

How Did Bar Exam Prep Take Over TikTok?

People have been sharing their personal experiences with the Bar Exam since summer 2021; between graduating law school, to studying everyday, to eventually receiving their results a few months later. Bar Exam content increased rapidly in May 2022 as lawyers began to study for the July 26 and July 27 Bar Exam. One creator posted on July 27, “Has anyone else’s FYP just been the 2022 Bar Exam for the past two days?!?” TikTok is giving users an inside look at how intense the Bar Exam journey is.

On Wilson’s “countdown to the Bar Exam videos,” she received thousands of comments hyping her up and giving her the support she needed to believe in herself and her abilities. One commenter said, “All the good luck your way bestie,” while another said, “GO BESTIE CAN’T WAIT FOR YOU TO BE OUR FUTURE LAWYER.” One of Andrews’ followers said “You’re going to do great! You have sooooo got this!” It’s clear that thousands of people recognize the hard work that aspiring lawyers like Andrews and Wilson put into their education and support them through every step of the way.

Bar Exam TikTok serves as a safe haven for future lawyers to receive support and good vibes during an uncertain time. Wilson has been sharing much of her law school journey with her 918.3K followers, establishing a relatable and sheltered account for law students and law school enthusiasts to connect and rely on each other. Starting on June 7, Wilson posted “Bar Exam morning routine” videos, showing followers how she chose to approach the exam with ease. After over 971.3K views on her first morning routine video, she began integrating her law school content into all of her videos; tanning on the roof while studying, going to the gym while studying, cuddling with her cat while studying. It was clear just by scrolling on Wilson’s feed that the Bar Exam had become her life between her law school graduation until early August when the exam was over.

Andrews posted her first Bar Exam video on May 9, which received over 680.4K views. In the video, she shared all the elements of her Bar Exam prep days; a quick workout, coffee, breakfast, and of course setting up her desks and materials to begin a 12 to 14 hour study day. Hundreds of Bar Exam preparation videos proved that every lawyer approaches this exam differently. Wilson chose to take two weeks off after law school graduation to mentally prepare before starting to study for the Bar Exam, while Andrews immediately jumped from her cap and gown to sweatpants, textbooks, and sticky notes the minute she stepped off the commencement stage.

For both Andrews and Wilson, they began sharing their law school journey with TikTok as a way to feel less alone and share information with others in the hopes of being authentic. “In general, I have noticed that law students like to portray the image that they are always studying or that they don’t need to study because it’s easy for them. Both narratives can make you feel really bad about yourself, speaking from personal experience. That’s why sharing the bad moments of bar prep, the tears, the headaches, the breakdowns, was important to me,” Wilson said. “In law school, it’s almost shameful to admit something is hard for you, and I wanted to make others who were feeling similar to me feel less alone.”

Similar to Wilson, Andrews shared her Bar Exam experience in order to be a resource to support others who didn’t have the study resources she did. “Hearing from strangers who told me how much they believed in me, how I inspire them, and how proud they were of me for putting the work in was just really amazing,” Andrews said. “It sounds silly, but the positive messages I received really helped me to believe in myself when I was feeling down. So as much as I say that I make videos to help other people—in reality they helped me just as much.”

Before the TikTok takeover, many people knew the intensity behind the Bar Exam, but now TikTok is making that ever more clear. In the past, there has been a certain mystery behind surviving law school and bar prep. Because of #LawTok, people are starting to understand the intricacies of higher education and as millions of lawyers wait for their Bar Exam results, commenters continue to send their favorite law school content creators good vibes.

More like this
On TikTok, Tinned Fish Date Night Is The Latest Viral Food Obsession
By Emma Carey
TikTok's Butter Board Might Be The New Cheese Plate
By Emma Carey
This TikTok Song About An Unrequited Romance Has FYPs In Shambles
By Emma Carey
Why Everyone Is "Soft Tagging" Friends On Instagram Right Now
By Alexis Morillo
Get Even More From Bustle — Sign Up For The Newsletter