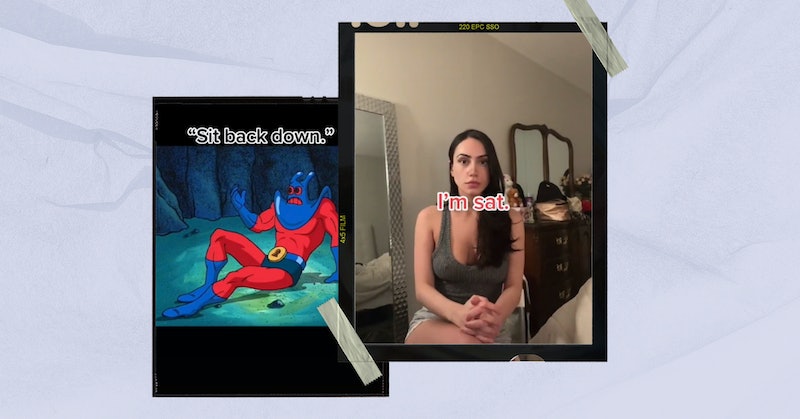 The TikTokers are getting creative again, this time to the tune of a clip from Love Island. The viral sound, which can be referred to as the “I’m sat” trend, is being used to expose the internet’s strangest crushes. It goes like this: a voice says, “I’m done with the conversation now,” and a deeper voice follows with, “sit back down” accompanied by a photo of an unexpected celebrity crush. Cue users dramatically dropping into seated positions with the response, “I’m sat.”

The tag #imsat currently has 18.6M views and with 118k videos and counting, this trend doesn’t strictly apply to strange crushes. Many users are pairing the sound with sizzling photos of Michael B. Jordan, Timothée Chalamet, and Robert Pattinson, but where’s the joke there? More often, users are taking the opportunity to unburden themselves and admit their most twisted celebrity crushes. Think, Spirit the horse or Hermey the Elf Dentist.

Where does the “I’m Sat” sound come from?

The original “sit back down,” and “I’m sat,” exchange comes from the international dating reality series, Love Island. If there is one thing the internet loves, it's Love Island.

The original context is a bit different from the sound’s current use. In the clip, we see a couple arguing. She says, “I’m done with the conversation now,” and he says, “sit back down,” though she literally never stood up in the first place. Her response, naturally, is “I’m sat.” Upon discovering the original source of the sound, commenters dropped thoughts like, “its so much funnier in this context,” and “when you’ve planned a script in ur head but they didn’t follow it.”

How are people using the “I’m sat” sound?

With countless cycling trends and a bottomless well of content, TikTok is great for one thing – reminding us that we’ve never had an original thought. Aroused by Spongebob characters or Avatar people? Apparently, you’re not alone. Attractions that may have previously sent someone into an “am I okay?” spiral are now just another thing we all have in common.

One of the most viral videos in this trend comes from user @__tengens4thwife and admits a deep attraction to Jake Sully from Avatar, and not in human form, to be clear. With 3M likes and 12.4M views, the video collected comments like, “he is so fine,” and “go to sleep.”

Another user, @kennas.crystals.co, conjured a forgotten figure from our collective childhoods, Diego the lion from the animated film series, Ice Age. More than 7,000 comments echoed, “no cause it had to be said,” and “he is literally my lock screen.”

@laraadkins on TikTok earned 2.6M views and half a million likes for her take on the “I’m sat” trend, which honors the original baddie, Shego from Kim Possible. The comments agreed, saying, “no bc what business they have making her so hot,” and “I’ve gotta agree on this one.”

Speaking of the original baddie, this trend also brought respect for the original bad boy – Gill from Finding Nemo, voiced by Willem Dafoe and made mysteriously hot with a large scar. User @giofilmedthis’s confession earned 1.4M views and thousands of comments like, “i’m sat, been sat, and will stay sat.”

Another user, @_maria_elizondo, gained 2.2M views with her video thirsting after Manray from Nickelodeon’s Spongebob Squarepants. The comments stirred up the conversation with, “this is one of the hottest takes,” and “the tickle belt episode was my awakening.”

So, who are you sitting for? Humorous submissions only.

More like this
What Is A “Softboy?” The TikTok Term & Aesthetic, Explained
By Courtney Young
Why Are TikTokers Slapping Each Other With Tortillas?
By Courtney Young
Here’s Why Everyone On TikTok Is Getting “Krissed”
By Courtney Young
American Girl Doll Memes Are Going Viral On Instagram & Tiktok
By Emma Carey
Get Even More From Bustle — Sign Up For The Newsletter