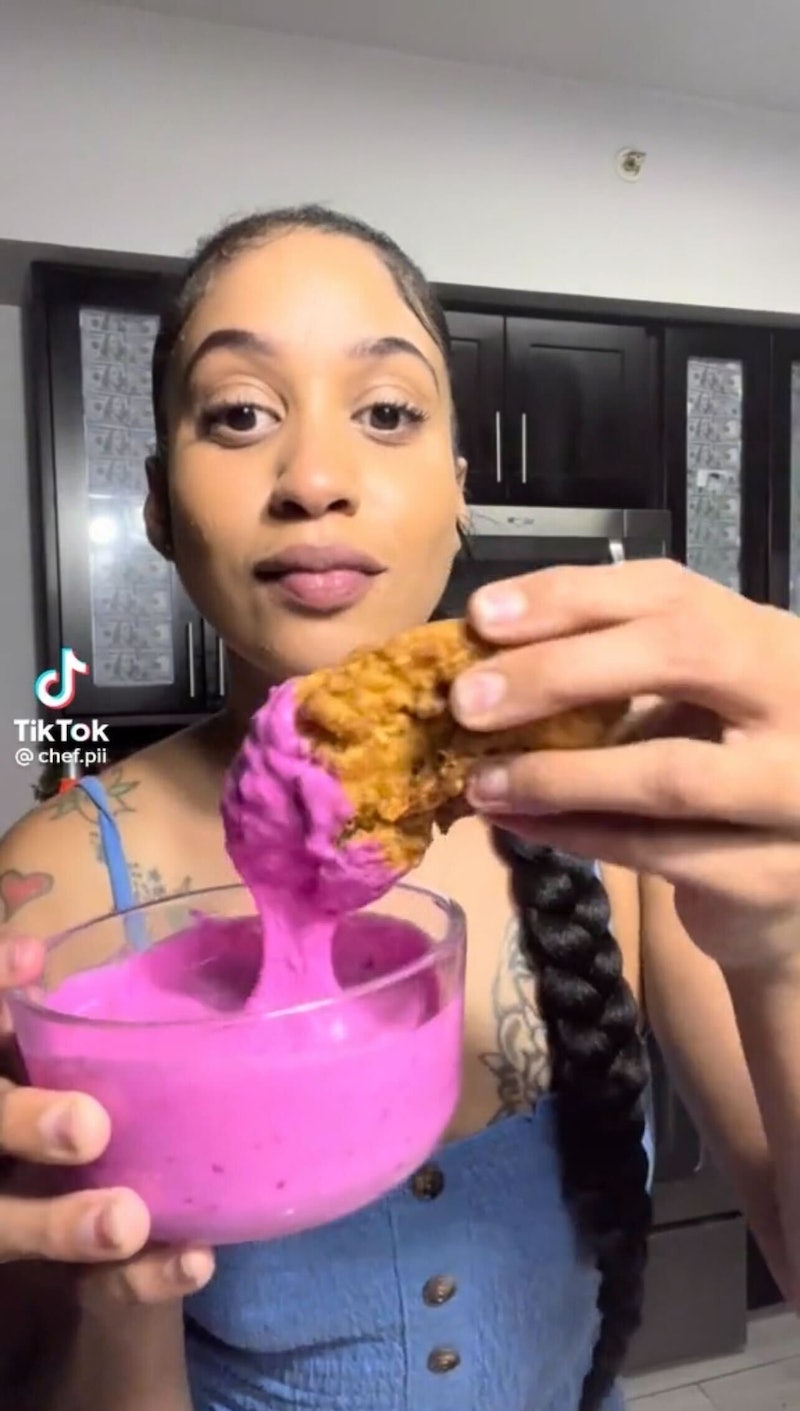 Pink Sauce, a hot pink colored sauce that is said to be a good replacement for ranch, quickly gained virality on TikTok after its creator, @Chef.Pii posted videos of her eating the sauce. It’s to no surprise that people were so quickly captivated by the product because of its unique, bright pink hue. However, as this fascination grew so did the confusion.

People started noticing that the creator wouldn’t explain the product’s taste, ingredients, or creation process — leaving her followers and potential customers skeptical of the sauce. She was soon bombarded with questions about the Pink Sauce's ingredients and creation process, none of which @Chef.Pii answered up front. After the product’s launch on July 1st, people began noticing the inconsistencies in color, texture, and taste, as well as incorrectly listed nutrition facts and confusing labels. TikTok users have only gotten more concerned following the first batch of sauces that were sent out to buyers. While many are intrigued by the color of the sauce, they also can’t ignore the fact that the creator’s story isn’t exactly consistent and after receiving backlash for a poorly communicated launch, Pii is continuing to sell her product. Keep reading to understand the absurdity of this sauce and why followers are puzzled.

What Is TikTok’s Pink Sauce?

Carly Pii, who has four years of experience as a Miami-based private chef and a TikTok following of 62,600, posted a string of videos starting on June 11, 2022 sharing her creation, the Pink Sauce, with the world. The Pink Sauce has been marketed as a sauce that can be used to add a bit more flavoring to anything — and Pii recommends chicken, tacos, quesadillas, gyros, even rice or pasta. After posting her first Pink Sauce video, in which she was simply dipping a chicken tender in the sauce, people immediately started to become intrigued — some commenters wanting to get their hands on their own Pink Sauce and others being disturbed by the intense pinky purple color.

Pii continued to post videos on TikTok advertising the product, however, she never once explained its ingredients or why it had that intense pigment. Followers started to catch on to Pii’s lack of openness when she posted a video of her pouring the sauce into a ketchup bottle with the caption, “It’s edible and natural, who wants to try it?”

What Is The TikTok Pink Sauce Controversy?

On June 18, Pii posted a video of someone “taking a sip” of the Pink Sauce, including the caption, “I’ll let the people talk for me.” In the video, the person says the Pink Sauce is “sweet, savory, seasoned really well, I love it.” Still, no specific ingredients were disclosed and Pii continued posting Pink Sauce taste test videos and even began responding to haters, saying it has no artificial food coloring, and telling the commenters that asked what it tasted like to “just buy it and see.”

As Pii’s Pink Sauce content increased, so did viewers' suspicion. TikTokers quickly started to notice the consistent changes in color intensity — what started as a purply pink turned into a millennial, Barbie pink, and eventually even a pastel pink. “Why is it a different color in every picture?” said one commenter on Pii’s June 18 video. At this point, Pii stopped responding to questions in the comments and left viewers in the dark on what this product actually contains. In another video, she applies the sauce to a taco and takes a bite, but this time followers noticed that the texture had completely changed. In earlier videos, the sauce appeared more pasty, more similar to the texture of ranch but in this video on June 19, Pii’s Pink Sauce was runny and almost watery. As the videos kept coming, commenters also noticed that every video ends before she stops chewing — leaving people to believe that she might be spitting out her own product, with one viewer saying, “I’ve never seen you finish your meal with this sauce.” Naturally, these inconclusive videos have led to more questions from those online.

What Is The TikTok Pink Sauce Made Of?

On June 19, Pii finally responded to a follower asking what ingredients she uses to make the product pink. In the video, she explains that she came up with the concept about a year ago, wanting to construct a “crazy, off-the-wall sauce.” She said her friend who she brainstormed the sauce with told her if she was going to create a colored sauce, that it had to be natural. That’s when she started doing her “research” on how to get the pink color “naturally.” Pii says in the video that the Pink Sauce is “100% naturally colored, with no artificial additives.” She then continues to say, “I can’t tell you the ingredients that I used to make it pink, but it’s pink!” She then went on to share with her followers that the product was still in a “quality testing phase” which was her reasoning for not disclosing the ingredient list in detail.

By the end of June, her entire comment section was full of people asking for a simple ingredients list. One follower on Pii’s June 24 video said, “She’s never going to tell us what the hell it actually tastes like.” She did, however, fill people in on why the color changed. “It is not a different color in every video. I did not like the darker colors so I made it lighter.” Once again not offering any additional information as to her culinary process. It’s important to note that in a later video she said “the color didn’t change, it’s the lighting.” Your story isn’t adding up, bestie.

Finally on June 25, the day of the Pink Sauce presale, Pii posted a graphic that showed the five major ingredients supposedly included in the sauce; dragon fruit, sunflower seed oil, honey, garlic, and chili peppers. She then began claiming that there were health benefits within the sauce. “The sauce tastes like its own thing. You can’t really compare it to anything else. It’s a creative concept. I’m a creator. I’m an artist.” With the launch of the official product on July 1 (mind you it was not FDA approved like many of our other favorite sauces) Pii finally released the Pink Sauce’s nutrition facts. On her website, the nutrition facts state that there are 444 servings per container. For some context, the nutrition facts on a similarly-sized ketchup bottle states there are 74 servings per container.

How To Buy TikTok’s Pink Sauce

After the first batch of Pink Sauce was shipped, there were about 50 orders that were completely ruined in transit — an issue Pii didn’t acknowledge until her followers blew up her comment section. She responded saying customer satisfaction is their top priority and mistakes happen. She encouraged followers to reach out to her if they received a damaged Pink Sauce. Pii also included in her apology video that her sauces were sent in bags which could’ve been the reasoning for the damage. Commenters seemed pretty surprised that Pii didn’t think to send refrigerated products in a more insulated package. Pii has been selling the sauce through her seemingly unfinished website for $20 per bottle.

Now, almost a month since the official launch, the Pink Sauce Queen is apologizing. On July 20, she took to TikTok saying she’s listening to her followers. “I am only human. I am not perfect. Things happen. The grams got mixed up with the serving size.” Pii now stated there are 444 grams of Pink Sauce in each container, with 30 servings per container, as opposed to the originally noted 444 servings. She repeatedly expressed that they are in lab testing.

In a July 21 YouTube Live video responding to the controversy posted on her account, Chef Pii said the Pink Sauce has only been an “official product” for 20 days. She also compared the taste of the sauce to a vinaigrette, "subtly sweet, spicy, and tangy." Pii said she served the Pink Sauce to the public at a restaraunt she owned last year although it’s important to note: there is no information regarding this alleged restaurant available online at the time of publication. Pii also explained there's less than 2% dried milk in the Pink Sauce, which is not yet included on her ingredient's list.

Followers are unsure how the Pink Sauce saga will play out. But if you’re eager to get your hands on some Pink Sauce, you can always run to the grocery store, get a bottle of your preferred ranch, some food coloring, and make your own.

More like this
Dunkin’s Valentine’s Day Lineup Includes A Drink That Tastes Like Dessert
By Alexis Morillo
Learning To Love, Not Judge, The Lunchbox Wives Of TikTok
By Esther Zuckerman
I Spent 2 Years Trying TikTok’s Dating Advice
By Kailynn Johnson
15 Black-Owned Liquor & Wine Brands To Add To Your Bar Cart
By Alexis Morillo
Get Even More From Bustle — Sign Up For The Newsletter
From hair trends to relationship advice, our daily newsletter has everything you need to sound like a person who’s on TikTok, even if you aren’t.