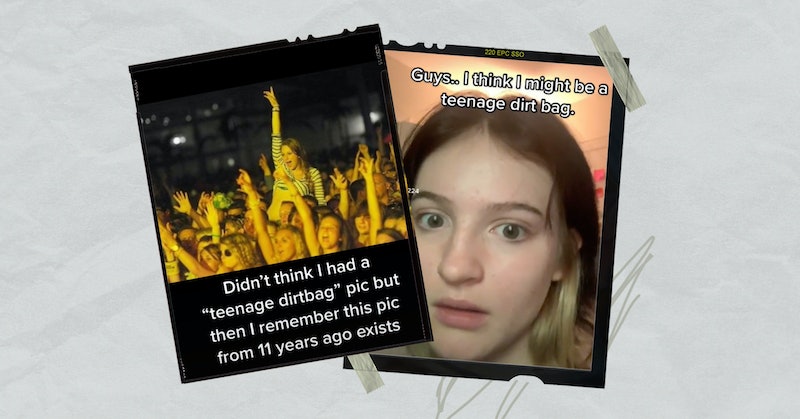 It’s time to start going through your photo albums from your teenage years and early twenties, because there’s a new TikTok trend that allows you to showcase your most chaotic throwback photos. Those cringey photos that you might’ve previously hidden in an unmarked box in the back of your closet are now being openly shared on TikTok over a sped up version of the recognizable song, “Teenage Dirtbag” by Wheatus, making the Teenage Dirtbag trend. Whether the photos show you visibly lit at a college party, laying in the middle of a parking lot, or that one emo-inspired haircut you got during a fit of rage in 2005, the trend has grown quickly and spread across generations.

Both Millennials and Gen Z’ers are sharing their most deranged photos from experiences that helped shape their inner “dirtbag.” In some ways, it’s allowing creators to romanticize their most anarchic years — looking back on those memories with equal parts embarrassment, humor, and nostalgia. The hashtag, #TeenageDirtbag, has gained over 587.6 million views, while the remixed version of the song holds over 456.7 videos. TikTok users and celebrities alike are jumping on this trend — thinking back fondly on their younger days. Keep reading to take a walk down memory lane and learn more about the Teenage Dirtbag trend.

How Did The Teenage Dirtbag Trend Start?

As regular TikTok users know, nostalgic trends are constantly popping up on the FYPs of millions. In the past, people have experimented with hairstyles from the early 2000s, shared personal camcorder videos from the 90s, and even “Get Ready With Me” videos based on different decades of fashion. This is not the first time that the Wheatus hit has taken center stage on TikTok. In March of 2021, the first round of the Teenage Dirtbag trend surfaced, except with the original tempo. The 2021 trend was trademarked by a few phrases at the beginning of the video — “That’s not me,” “That’s not you?,” “Nope” — and then cut to an unrecognizable photo of the creator as “I’m just a teenage dirtbag, baby” plays in the background.

Some creators used this first iteration of the trend to show how they’ve experimented with different aesthetics — one creator appearing flabbergasted by her former “VSCO girl” self. Another creator recalls a time when she dressed up as a vampire for family events — complete with white face paint, fishnet tights, and a bold red lip to both Thanksgiving in 2008 and a family trip to Disney World.

What Is The Teenage Dirtbag Trend?

This revamped version of the Teenage Dirtbag trend encourages users to get in touch with their most disheveled past self. The second adaptation began at the end of July 2022 and once again spread across all different corners of the internet. But this time, it’s all about sharing those photos you might’ve otherwise kept to yourself. The photos you would’ve rather burned instead of posting on the internet. You know the ones.

Now, to be clear, the Teenage Dirtbag trend isn’t just someone living their best Bella Swan life in dark makeup and a moody attitude. If you grew up listening to alternative music instead of the pop hits on the radio, consider yourself an e-girl, or don’t remember much of your twenties, you’re most likely a Teenage Dirtbag. Basically, you were the mysterious kid in high school, you wore vintage clothes before they were all the rage, and honestly, you might be wishing you were still in your Teenage Dirtbag era.

Some people have confused the trend for just another opportunity to share a picture from high school, but that is not the case. While looking for your Teenage Dirtbag photo, stay away from your yearbooks, your mom’s photo albums, and definitely your family Christmas cards. You won’t be finding your rebel pictures in any of those wholesome places. Look for those pictures where you’re wearing an edgy 2000s outfit, complete with low-rise black jeans, chunky belts, layered tank tops, and maybe even a set of dramatic side bangs.

One content creator, @LittleLicata, completely understood the assignment when she posted a photo of her at a Sublime concert in 2009, where she was on top of someone’s shoulders screaming for her favorite band. What made this photo a perfect example of the Teenage Dirtbag trend was the fact that the rugged photo was shared to her local newspaper. @LittleLicata received over a million views on this video, with over 202,800 likes. It’s clear that viewers agreed that Licata understood the trend clearly.

User @cigsoverpigs, a Gen Z creator who nailed the Teenage Dirtbag trend, took grunge to the next level in his post. He shared a photo on film of him with a pink and black mullet, piercings, intense eye makeup, and iconic edgy accessories — yes, there’s a collar and it is iconic. His caption said, “I look terrifying in a good way,” which is entirely correct. This post was a more hostile take on the trend, but nevertheless it fits the mold.

Ever since the Teenage Dirtbag trend resurfaced in early August, celebrities have also begun jumping on the bandwagon and posting their own version of the TikTok trend. Joe Jonas, Nina Dobrev, Paris Hilton, Chloe Cherry, Demi Lovato, Alicia Silverstone, Brooke Shields, Charli XCX, and even Julia Fox are just a few of the celebrities who have put their own spin on the viral trend. Demi Lovato is the ultimate Teenage Dirtbag — and that’s totally a compliment.

As the trend evolves and reaches new audiences, the Teenage Dirtbag trend has been spun on its head. While it’s creating a safe space for people with an inner dirtbag, it’s also allowing people to acknowledge that they might not have been a Teenage Dirtbag. The people with a bit of a sheltered childhood are also able to connect with the trend. Both introverts and extroverts are seeing themselves represented as a Teenage Dirtbag.

The “Introverted Dirtbag” version usually starts with a creator saying, “I wish I was a Teenage Dirtbag, but…” One creator, @stevieraythepup, posted a less intense adaptation where she shared that her childhood was spent being an active “church kid,” a lifestyle she has since given up. The video, which received 8 million views, showed that instead of spending her time at concerts, clubs, or bars, @stevieraythepup was singing worship songs and getting Christian tattoos.

Another creator, @thethatgirlguide, blatantly said she’s not a teenage dirtbag. She said her parents had to pay her to go to parties and that she’s never been grounded. It seems this creator is not claiming the dirtbag energy even a little bit. Now, I don’t think whether or not you were grounded as a child makes you a Teenage Dirtbag, but the definition is definitely up for interpretation.

Everyone has a little bit of a Teenage Dirtbag inside of them, whether you spent your teenage years at hard rock concerts or reading your favorite book over and over again. Don’t be afraid to bring your inner dirtbag out, just maybe leave the side bangs back in 2007.

More like this
Ashamed Of Your Screen Time Stats? Here's How To Change That
By Alexis Morillo
Learning To Love, Not Judge, The Lunchbox Wives Of TikTok
By Esther Zuckerman
I Spent 2 Years Trying TikTok’s Dating Advice
By Kailynn Johnson
How To Turn Off TikTok Profile Views So You Can Stalk Other Accounts In Secret
By Alexis Morillo
Get Even More From Bustle — Sign Up For The Newsletter
From hair trends to relationship advice, our daily newsletter has everything you need to sound like a person who’s on TikTok, even if you aren’t.