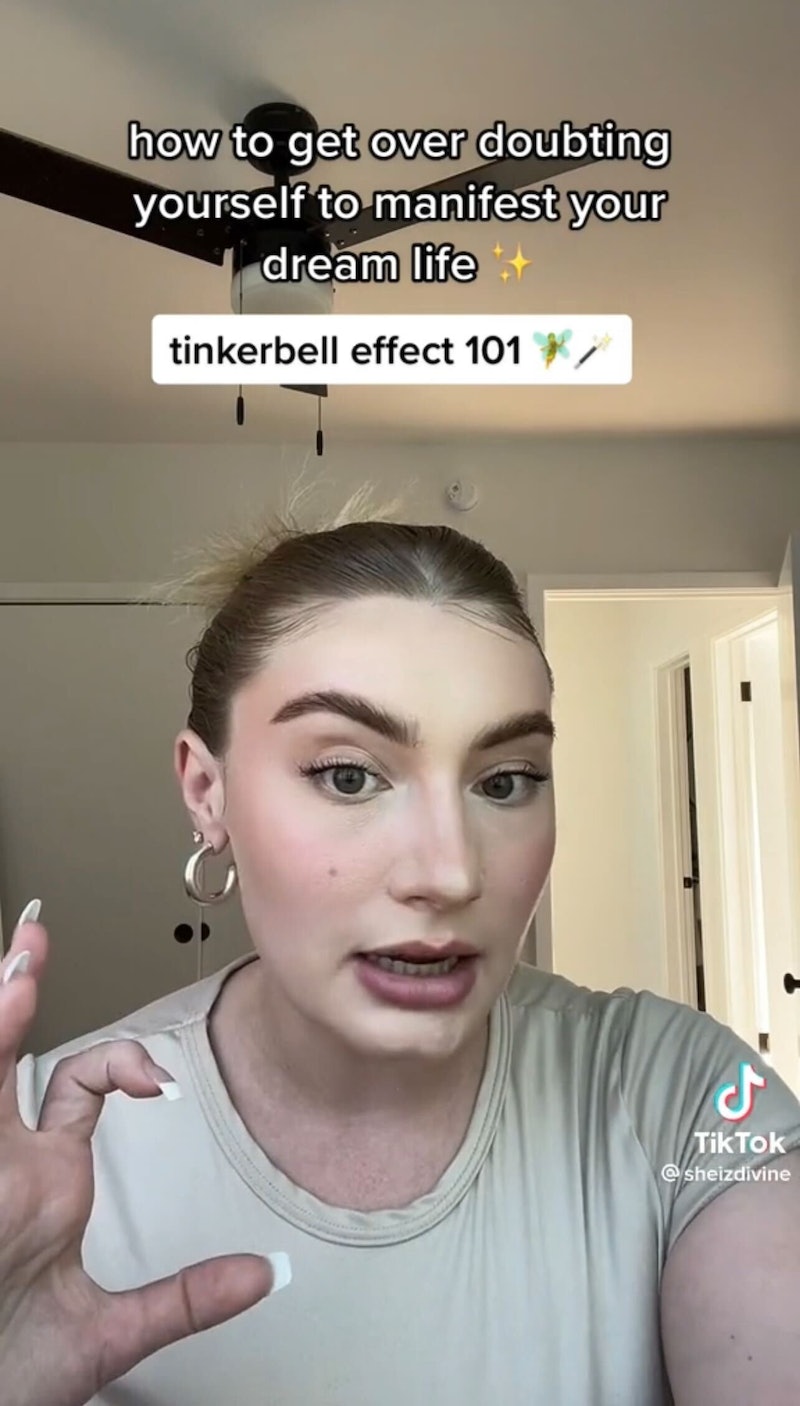 The Tinkerbell Effect is giving people the faith, trust, and pixie dust they need to manifest their dream life. No it’s not a new animated movie or a ride at Disneyland, it’s a manifestation technique that went viral at the end of July 2022. Combining the law of attraction and the law of assumption, the Tinkerbell Effect is essentially believing in the possibility of your hopes and dreams to the extent that you manifest them into fruition. Manifestation coaches on TikTok have explained the Tinkerbell Effect as breaking down what you want to manifest and opening yourself up to the realm of possibility, while escaping doubt.

There are many different explanations of the Tinkerbell Effect on TikTok, some encourage experimenting with “what if” phrasing, others imagine their goals as a memory instead of happening sometime in the distant future, and some people think that the more you believe in the possibility of a change, the more likely it is to appear in your life. With over 5.2 million views, the hashtag #TinkerbellEffect includes thousands of different explanations as to what this new technique is, the power it holds, and how to properly use it in your manifestation practices. Keep reading to understand what the true Tinkerbell Effect is.

What Is The Tinkerbell Effect & Where Did It Come From?

Regardless of the confusion around the Tinkerbell Effect’s scientific origins, this trend is a manifestation technique, similar to the Whisper Method, that allows you to visualize an aspect of your life you’d like to change and gives you the power to actively alter it. Whether it’s a new job opportunity, a date with that one person you’ve been thinking about for awhile, or even initiating a healthier relationship with your body, people are using the Tinkerbell Effect to materialize a personal upgrade to the way they function everyday.

You know in Peter Pan when Tinker Bell is on her deathbed and all she needs in order to save her life is people to express their belief in her? This method essentially mirrors that in the way that you need to wholeheartedly believe that this change has already happened or is happening in the present time. The more you believe in something, the more likely it will actualize itself. However, here’s where it gets tricky, you can’t believe that this change will happen. You can’t say to yourself, “I believe that I will get my dream apartment in six to eight months” because that takes the power of this alteration out of your hands, making it harder for you to whole-heartedly believe in this change. One manifestation coach on TikTok references Dr. Joe Dispenza’s explanation on quantum physics and how to bend reality as one way to approach the Tinkerbell Effect. Dispenza believes it’s scientifically possible to alter the way certain situations pan out, which is shown in his December 2020 report on the physics of possibility.

Why Did The Tinkerbell Effect Go Viral On TikTok?

At the end of July 2022, manifestation coaches and mindset content creators started introducing their followers to the Tinkerbell Effect. On July 23, @MamaWhoManifests said the Tinkerbell Effect is just a catchy name for the science behind energetic work and manifestation. She acknowledges that when you change your thoughts, you’re changing your reality, but claims there’s more science behind this method than meets the eye — “What stops your thought from actually materializing or changing your life is essentially doubt.”

She suggests that people focus on one incredibly specific thing that you want to believe in so deeply, with the intention of changing the way your life unfolds. Tying in the importance of believing in yourself and the power you contain, @MamaWhoManifests suggests using “what if” phrasing — completely bypassing doubt and only focusing on bringing your thoughts to fruition. For example, “what if I set aside two hours a week for something that brings me joy?” @MamaWhoManifests claims this method essentially opens yourself up to whatever possibilities this change would bring you.

In a video from @MichelleHillier with over 164.4K views, she utilizes the Tinkerbell Effect by imagining her change as a memory — “something that has already transpired, something that I’ve already experienced and fully lived,” she says in the video. According to her, it made the experience feel more real and achievable. She suggests claiming this manifestation in the form of writing a letter to yourself or someone else, acting as if that change has already occurred — explaining in vivid detail how successful the experience was, even though it hasn’t actually happened yet. She then said that she used this method to manifest five all-expense-paid trips around the world, just one extravagant example of the Tinkerbell Effect in action.

One creator, @SheIzDivine, encouraged using affirmations while experimenting with the Tinkerbell Effect. This unconventional approach to the viral trend received over 347.1K views. She acknowledged how difficult it is to break through those feelings of doubt, especially when visualizing your dream life. Similar to @MamaWhoManifests, she believes the way to see a breakthrough in this method is through believing in the power of the law of attraction, trusting that positive thoughts bring positive change. She claimed she manifested $40K by using the affirmation; “I am open to all the ways in which this is possible for me.”

Commenters were quick to compare the Tinkerbell Effect to other techniques like cognitive behavioral therapy and the Placebo Effect. People started realizing that they might already be subconsciously practicing this method — with one person commenting on @hood.winkler’s video, “I've literally done this all the time without even knowing what this was” and another commenting on @MamaWhoManifests’ video, “This is exactly what i’ve been doing, but had no idea it was called this…thank youuu!!” It’s clear the Tinkerbell Effect is positively impacting the way people view their hopes and dreams.

Now, it may seem like people are just changing the name on a pre-existing method, which very well could be true. But if it gives people the courage and strength to view their dream lives as more attainable, maybe this is just the manifestation technique that people need right now. Connect with your inner magical fairy and live the life you deserve.