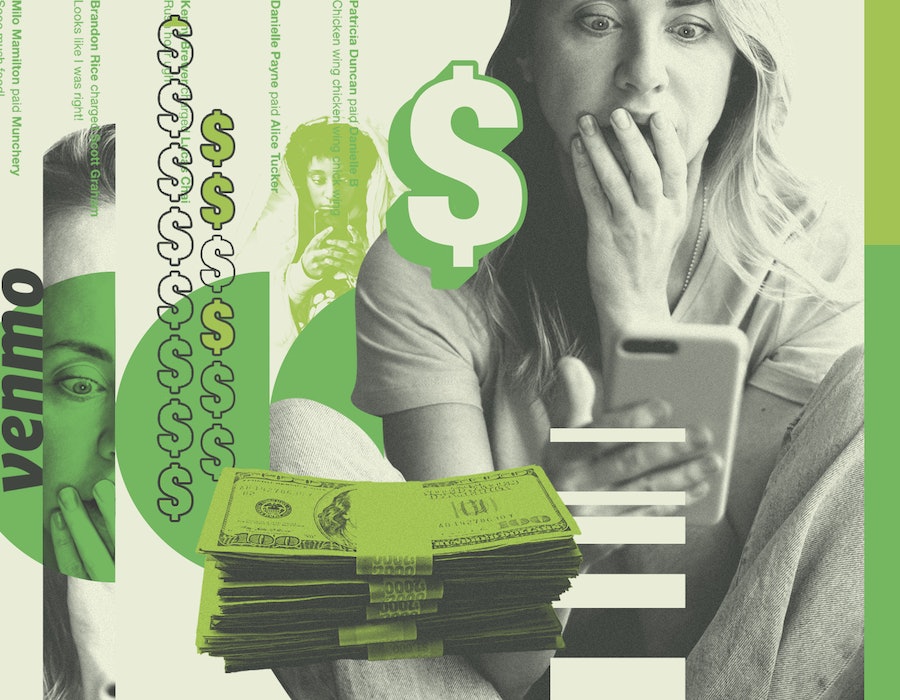 Early in March, podcaster Amber Nelson tweeted about a recent awkward social interaction. “Got invited to someone’s place for dinner and they charged me for it….this is weird, right?” The tweet went viral with nearly half a million likes, over 15,000 retweets, and an endless scroll of comments validating that yeah, that’s bizarre.

Since its launch in 2012, Venmo has been as great a source of entertainment as of drama. Those in the know understand its appeal as a stalk-worthy social network of over 83 million people: On the public transaction feed, you can find out which married couples still go Dutch on dinner, which of your college pals are meeting up for drinks without you, and who is paying for mysterious services described only in emojis. In theory, the platform is supposed to make paying your friend back for coffee conflict-free; simply request and receive, right? In reality, people say that Venmo and apps like it have emboldened their friend groups to be even weirder about money.

While getting charged by a friend for food they offered to make for you might be somewhat of a social anomaly, a deep dive into Venmo horror stories proves that outrageous charges aren’t hard to come by, leading to breakups, blowouts, and more. Below, read four millennial women’s cringiest Venmo transactions and how they handled them.

Ali, 30, tells Bustle that a Venmo charge shut the door on a new relationship before it could start. “I was on a first date once and the guy made this big show about getting the check, [putting] his credit card down, and [refusing] mine.” The New York City-based photographer thanked her date, thinking he was offering to cover the bill. “Then, he takes his phone out, opens up his Venmo QR code, and hands it to me.” Ali says that she felt obligated to complete the charge, but swiftly shot down a request for a second date via text days later. “I’m not against splitting the bill on a first date but that was just so tacky — too tacky,” she says.

For JJ*, a 28-year-old events coordinator in Denver, Colorado, Venmo has become a “traumatizing place” after finding out her boyfriend of two years was cheating on her on the app. “He didn’t know he was sharing his transactions publicly, and I started to notice that he had Venmoed back and forth with a woman whose name I did not recognize,” JJ tells Bustle. After observing mysterious interactions between them — embellished with blushing smiley emojis — she looked up the woman’s name on Instagram. “I checked her stories regularly until I found one he was in with his arms around her waist.” When she confronted him about it, he called her “crazy.” “Thank God I had the receipts,” she says. Now, JJ says that when she uses Venmo, she avoids looking at the feed; it’s too triggering.

Mari*, 32, a graphic designer in Los Angeles, California, tells Bustle that her relationship with her younger sister took an uncomfortable turn after they both started using Venmo in 2018. “Every time I hang out with my (very financially stable) sister, the day ends with a Venmo charge,” Mari says. On their dad’s birthday two years ago, Mari’s sister assumed they were splitting a present and sent a Venmo request for half, even though Mari had bought him a gift on her own. “For weeks, she sent me Google Calendar reminders to pay her back.” Mari declined the invitations and ignored the transaction requests for months, and nearly six months later, the sisters had a blowout fight over it.

Mari had thought they had reached an understanding after that argument — to not make assumptions about each other’s financial contributions, and insist on separate checks when dining out — but a recent dinner set them back. “She insisted on bringing me sushi a few weeks ago, even though I told her I wasn't hungry. I had about two bites to be polite, and she charged me for half of the order plus tip.” Mari paid her for the sushi she didn’t want, and explained that going forward, there would be no more “miscommunications.”

Bang For Your Buck

You know those eggplant emojis you sometimes see in your feed? Well, Taylor*, 33, says they’re not all in jest. The teacher based in Portland, Maine, Venmos her boyfriend her half of the rent each month. But one time after too much wine, she had an alternative idea. “I asked him If I could get a refund if I gave him a blow job,” she tells Bustle. “I was joking, and I thought he was too when he agreed. But the next morning he Venmoed me back the rent money with the subject ‘BJ refund.’” Taylor was shocked to see it, even though he had the sense to make it a private transaction. “It made me do a spit-take but I just decided to accept it,” she says, adding that they never discussed it again. “I paid him the rent a day early the next month so he didn’t have to worry about me making a habit out of it.”

Interviews have been edited and condensed for clarity.