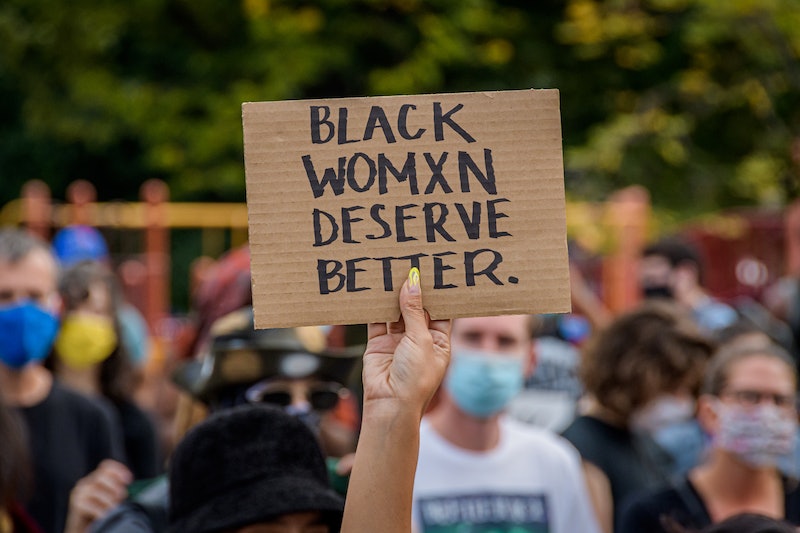 I learned Ma’Khia Bryant’s name in late April 2021. I had just listened to the verdict in the Derek Chauvin trial, and less than an hour later, scant details appeared on my Twitter timeline about police shooting someone just a few minutes from where I live in Columbus, Ohio. I didn’t want to dig. I didn’t think I could handle reading the details of yet another police killing. But I felt a duty to bear witness. It was too close to home. Within minutes of scrolling and clicking, I learned that the victim of the shooting had died. I saw a tweet about the victim being a teenager. Soon, reports of it being a Black girl surfaced. Hot tears streamed down my face. Not again. Not another Black person. Not a Black child.

A police officer killed 16-year-old Ma’Khia Bryant within moments of arriving on scene to a fight where there were more than a few options for de-escalation. From what her family shared, she was fearful of being violated, either by persons who came to her foster home or perhaps by people within her foster home. She felt compelled to defend herself. She armed herself with a knife. A few weeks before, Ma’Khia’s younger sister called 911, pleading for her and Ma’Khia to be removed from a foster home in which they felt unsafe. Officers who responded told her sister there was nothing they could do, despite her telling them about the fighting occurring in the home. Just a little over three weeks later, the 15-year-old tried once more to get some help from the police. This time they fatally shot her sister, Ma’Khia.

When more details surfaced about Ma’Khia’s killing, I was struck by the fear she and sister felt living in a foster home with people they did not believe cared for them. The fear she had was so present that she felt the need to protect herself from what appeared to be an assault involving multiple people. Although a cop killed her, I struggled with the reality that the alleged violence she endured in her foster home was a precipitating factor in her untimely and unnecessary death.

Black girls’ and women’s victimization within a criminalizing system is a huge part of the violence we face, but it’s certainly not the only perpetrator of note. Violence against us often occurs in the spaces where we love and make love. It’s a lot more challenging for me and a lot of us to tell that part of our story because it requires calling out those with whom we build community and family and with whom we rage against white supremacy.

About a year before Ma’Khia’s death, I had traveled home to the D.C. area in June 2020 to celebrate my mom’s seventieth birthday and our first Father’s Day since my dad passed. On a drive to southeast Washington, D.C., to do a curbside pickup of my mom’s favorite hair cream, we pulled behind a white van. We instantly noticed something disturbing. From the car’s side-view mirrors, we saw a young, Black couple arguing. The driver, a young Black man probably in his twenties pushed the young Black woman in the passenger seat. Traffic, at this point, had briefly come to a stop at a red light. The young man got out of the van, walked around it, opened the passenger door, and grabbed the young woman. My heart stopped. Time seemed to simultaneously speed up and slow down as I watched him assault her. It happened in a matter of seconds, but each second after he exited the van filled me with wrathful indignation. He violently tossed her out of the car and threw her belongings onto the street next to her spindly body. As he called her a “f*cking b*tch” and a “stupid ass ho,” she begged him not to leave. He left.

When he grabbed her out of the car, my mom and I pulled over, as did a couple of cars in front of us. In my mask, I quickly went over to her right before he pulled off. Tears streamed down her face as she kept calling for him to come back. The van was already at the next light, nearly out of sight. She couldn’t get up off the ground. One of the couples from a car that pulled over noticed her inability to move as well. Our concern intensified. In between asking each other how this man could just assault this young woman and leave her on the damn street, someone watching this unfold called the police.

Her cries deepened. Her breathing became labored. As I sat down next to her shaking and frail body, I saw a medical wristband on her right arm, a bandage over her jugular I assumed was from a recent intubation, and medical discharge papers on the ground next to her. She’d just been released from the hospital. After gently telling her, I wasn’t going to leave her side, I asked her, “What’s your name sista?” She struggled to reply, “Montana.” Her next words nearly broke my heart, “I can’t breathe.” Just a few weeks prior to this incident, the world witnessed the last 9 minutes and 29 seconds of George Floyd’s life, as Minneapolis police officer Derek Chauvin pressed his knee against Floyd’s neck despite Floyd’s repeated professions of “I can’t breathe.” Six years prior, the viral video of the police killing of Eric Garner in Staten Island, New York, showed Garner pleading with an officer choking him. Garner told the officer again and again, “I can’t breathe.” Looking at Montana’s frightened face as she uttered those words, I feared what might happen next.

Within seconds of informing me of her name and inability to breathe, Montana began seizing. One of the people who stopped ran to get a blanket from their car while I and another person turned Montana on her side. We didn’t want her to choke. I laid down next to her on the pavement, reassuring her more help was on the way and that we wouldn’t leave her.

Hot tears of anger and sadness poured down my face. Someone picked up her discharge papers to get some insight into what might be happening. He leaned over to me and said, “She’s epileptic.” I immediately began internally timing the seizure, so I could inform the paramedics about the length of it. Every few seconds, her seizing appeared to get more and more erratic. Where was this damn ambulance? Is the young Black woman going to die in the middle of the street after being assaulted by someone she knew and perhaps loved? I couldn’t help but also hope that the police wouldn’t come. In addition to being in the middle of one of the largest national uprisings against racist policing and police brutality in U.S. history, I knew all too well how cops tended to handle Black women in distress. Cops’ responses to Black women in distress too often result in carceral or fatal outcomes.

As I lay on the ground, out of the corner of my eye, I saw a young Black man in a black T-shirt crossing the median from the other side of the street. He headed toward us. It was him, the guy who assaulted Montana and threw her out of that white van. He ran over to her and knelt beside her still seizing body, commanding her to “get up.” My fear of what would happen when “help” arrived quickly transformed into fury as I lay next to Montana. He then started asking those of us who pulled over, “What happened?” More incredulously, he posed an even more absurd question: “Did she get hit by a car or something?” Before I could even say, “Shut the f*ck up. You know you did this,” an ambulance and two cop cars arrived.

The young man, clearly under the influence of something, attempted to lift Montana’s writhing body off the ground. One of the helpful bystanders interjected, just as the paramedics walked over to me and asked what happened. I wanted to yell, “Do you not see a whole ass person seizing and vomiting?” But I knew that would only negatively affect the level of care Montana might receive. Two paramedics began assessing and assisting her. Another paramedic asked me again what happened and how long she’d been seizing. He seemed caring enough. All of us took turns reluctantly and sparsely informing the police about the events leading up to Montana’s seizing. Our reluctance stemmed from our shared and unsaid understanding that by even engaging the cops, this awful situation could become more violent. It’s not that we didn’t want accountability for what this man did to Montana; we just knew that what accountability looked like for the cops might include a deadly escalation.

Another cop car arrived, and three of the cops already on the scene began questioning the young Black man. Paramedics got a still-seizing Montana onto a stretcher and put her into the ambulance. Two bystanders left at this point, relieved that medical assistance had arrived. Around five of us stayed, as we now felt compelled to ensure that the young man who just assaulted Montana would not be harmed. The cops surrounded him. His gestures became more and more fitful as he denied any wrongdoing. Someone began filming the encounter on their iPhone. My mother and I stood close to each other and used witnessing as our passive intervention into what could’ve been a violent escalation. After several minutes of questioning and taking our statements, the officers let the young man go.

As soon as I got back in the car, I cried again. I didn’t know Montana’s fate. My concern for her outweighed my concern for her assailant, and I still couldn’t turn away from my instinctive impulse to protect him as well. Nothing about my politics allowed me to divest from caring about this young Black man, even as I worried about the harm he may inflict on Montana in the future. I didn’t sleep well that night, or the following for that matter.

Silently endure, unequivocally protect. The impulse to protect those who harm us emerges out of a desire to care for ourselves without relying on the state to intervene or further criminalize and pathologize Black people. Admittedly, at times this feels incompatible because of the pervasiveness of violence against us perpetrated by loved ones and those in our own communities. I don’t want to give any more lives to the police and the criminal punishment system to devour — like Ma’Khia Bryant — and I want us to be cared for and unharmed in our intimate relationships, homes, institutions, and communities. Both can be true.

Adapted from America, Goddam: Violence, Black Women, and the Struggle for Justice © 2022 by Treva B. Lindsey. Provided courtesy of University of California Press.

More like this
At 28, Minnie Driver’s Personal Life Was “Falling Apart”
By Kate Dwyer
30 Books To Read This AAPI Heritage Month
By K.W. Colyard
Michigan’s Governor Is “Going To Fight Like Hell” To Protect Abortion Access
By Andrea Zelinski
Chelsea Woody On Shattering Stereotypes In Surfing
By Leah Groth
Get Even More From Bustle — Sign Up For The Newsletter