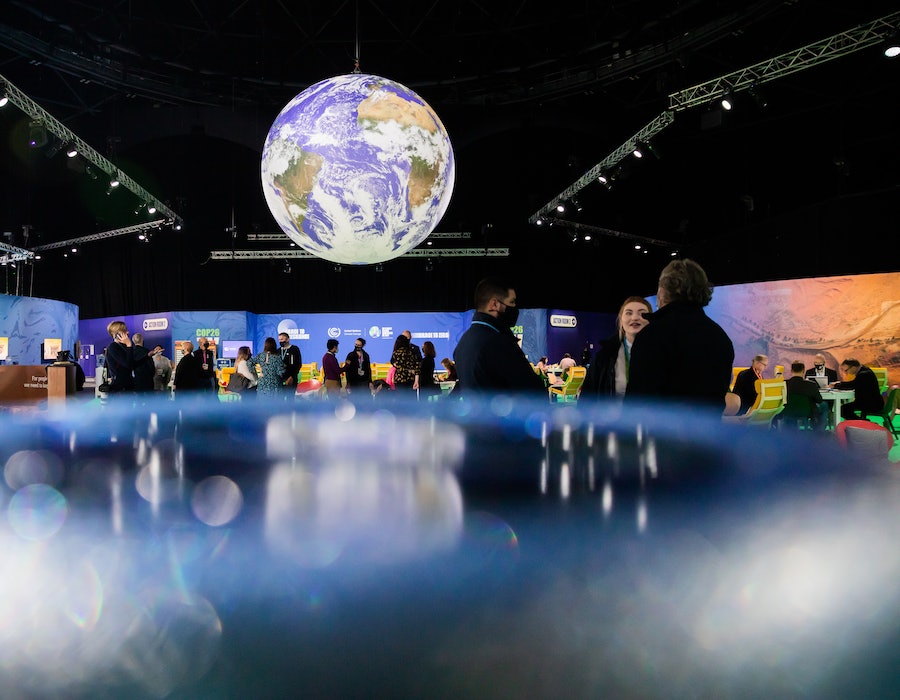 As I pushed the heavy revolving metal gate to enter Glasgow’s Armadillo-like SEC Centre, a giant exhibition hall on the edge of the River Clyde and official home of COP26, I looked back at the protesters shouting behind me. This divide – separated physically by lines of security, doors and fences, and ideologically by far more complicated workings – would become the prevailing theme for the rest of my time covering the global climate summit. The people on the outside were dressed in waterproofs and held cardboard signs, while the people coming inside (politicians, delegates, journalists) wore suits and carried briefcases. A tale of two cities, and a tale of two climate movements.

The first few days of the 40,000 people-strong conference were overwhelming and confusing. As a journalist representing gal-dem, an independent publication committed to telling the stories of people of colour from marginalised genders, I travelled alone on the high-speed train and wasn’t quite sure what I would be doing. I naively thought I’d be inside the rooms where all the big discussions and negotiations would take place. I imagined myself asking the “real” questions, and holding world leaders accountable.

What I found instead was an atmosphere of high-functioning chaos. Everywhere I went, hundreds of people – all here for the same reason, but seemingly missing out on the action – congregated on laptops, scrambling for seats and power points. At times it felt like I was back at my university library during exam season.

After bringing a small mountain of relevant documents and having my picture taken for my security pass, I was handed my COP26 “goody bag”. Inside the blue cardboard box: Dettol wipes, a hand sanitiser, a metal reusable bottle, a COP26 face mask, and a free travel pass.

The pass itself was useful, granting me free access to all public transport in Glasgow for the duration of the conference. Created especially for the event was a dedicated bus route, the C26, that would take people from the centre of the city to the two COP26 zones. Logical, I thought. But it wasn’t long before I discovered that Glasgow residents have been asking for a similar pass, connecting all public transport together, for years. We know that good public transport links will be vital in the fight against the climate crisis, so how could the host city deny locals of this but give delegates free passes for two weeks?

Once I adjusted my expectations from single-handedly saving the world from the climate crisis, the days fused together in a hive of activity. I drew up a schedule for myself which took me around the Blue Zone (for accredited visitors) and the Green Zone (open to everyone), as well as events outside the official summit, like the ones put together by the COP26 Coalition which largely sought an anti-capitalist approach to the climate crisis. I also made notes of planned protests to look out for, too.

Getting into the Blue Zone before 11am was virtually impossible, so I avoided the queues until the afternoon. Once there, I often headed to the ‘Action Hub’ – a circular room with the giant spinning Earth at the centre you may recognise from TV reports – and worked from one of the desks in the upper level. I spent some time walking around the different pavilions which showcased the many projects undertaken by various countries, organisations, and companies, to tackle the climate crisis. But on the whole, this area felt extremely corporate: a unique opportunity for big polluters to greenwash themselves on an international platform. I felt the same way about the presence of big corporations – like Unilever, Microsoft, and Scottish Power – at the Green Zone. Was it for the optics, or for real change?

Were it not for the COP26 logos everywhere, you’d struggle to believe you were at one of the most important climate conferences of our time.

The food too was disappointing. A margherita pizza I forked out over £10 for tasted more like the cardboard box it was clearly frozen in than any ingredients it claimed to contain. Coffee was liberally poured into reusable plastic cups, and the menu – heavy on meat and dairy-based options – was heavily criticised. Were it not for the COP26 logos everywhere, you’d struggle to believe you were at one of the most important climate conferences of our time.

The Media Centre was another building dedicated to hot-desking. With so much work happening on laptops, and so much waste being created by the arrival of 40,000 people, I found myself wondering on more than one occasion whether the conference could have just taken place online.

Accessibility was another huge issue. Travel restrictions and extortionate accommodation costs meant many delegates from the Global South were unable to attend. The exclusion of people with disabilities, including wheelchair access and sign language interpreters on the COP26 stage, meant it was branded it the “most exclusionary summit ever.”

Luckily, the COP26 Coalition and their alternative climate summit on Nov. 7-10, as well as all the direct action put together by activists around the city, served as a powerful antidote to the official conference.

Among the groups and individuals fighting for climate justice during COP26 were environment and development NGOs like Friends of the Earth and Greenpeace UK, trade unions, grassroots community campaigns faith groups, youth groups like Fridays for Future, migrant and racial justice networks such as MORE (Migrants Organising for Rights and Empowerment). On Nov. 6, 200,000 people gathered to demand climate justice, inviting indigenous activists to take centre stage. At least for a moment, hope was a tangible reality. As the protesters marched through torrential Scottish rain, they shouted loudly and held their banners and placards high. Even terrible weather couldn’t dampen their infectious energy.

The energy shift between these two organisers was unbelievable. The COP26 Coalition inspired hope and direct action, while still carrying the message of urgency. For me it was an unforgettable day of unity, seeing the hundreds of people who travelled from all around the world to be in Glasgow for the conference come together like that is not a sight or a feeling I will soon forget.

The official summit was little more than a microcosm for the structural inequalities of the world at large...

The question now is: “Was COP26 a failure?” In truth, it’s complicated. Yes, important pledges were made, but the official summit was little more than a microcosm for the structural inequalities of the world at large, where the poorest are shut out and the rich and the powerful still end up making all the decisions. However, the connections made, the stories told, and important actions taken outside of these parameters all create a strong foundation for a powerful and sustainable climate movement.

It’s becoming increasingly obvious that with so much pushback from wealthy nations and multinational corporations, the fight against the climate crisis is a marathon and not a sprint. Yet there is no single force that gets things done, it’s only when people try to push for a change from all sides that anything will get accomplished. In Glasgow, I witnessed why it was important for everyone to come together on the biggest issue humanity faces today. The difficulty, however, will be in keeping up this pressure from all sides until the next climate conference in Egypt.

More like this
Women Around The World Are Cutting Their Hair In Solidarity With Mahsa Amini
By Darshita Goyal
Black History Month UK’s 2022 Theme Calls For Action, Not Words
By Maxine Harrison
Chris Kaba's Family Continue Fight For Justice After Viewing Police Bodycam Footage
By Sophie McEvoy
12 Must-Watch Documentaries To Honour Black History Month UK
By Sophie McEvoy
Get The Very Best Of Bustle/UK