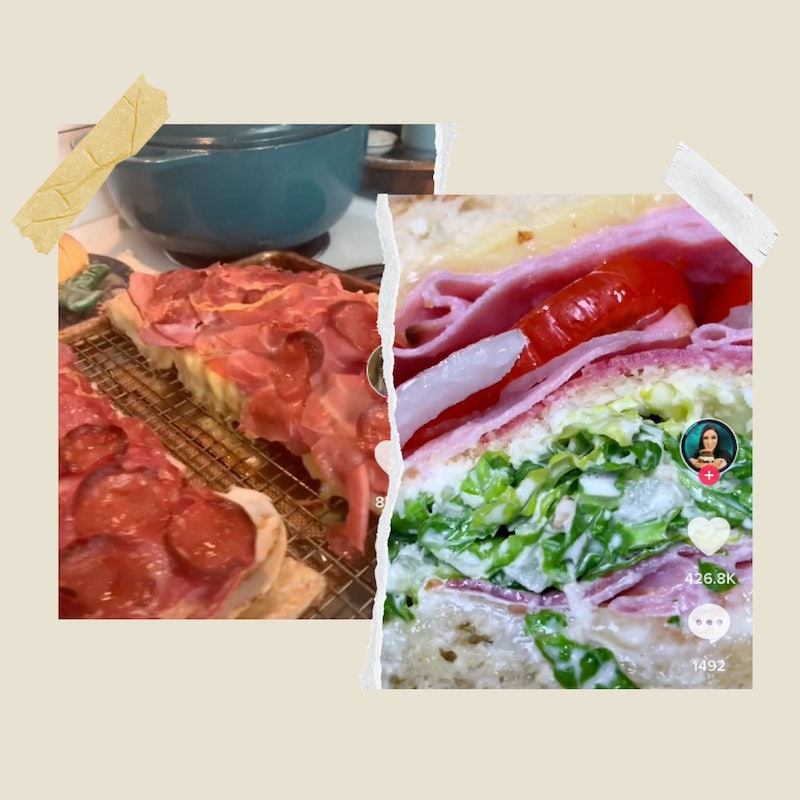 TikTok/@cookiterica/@ohheyimgray
By Emma Garza
May 6, 2022

TikTok users are once again combining familiar ingredients in a fresh way with a viral recipe that unites a salad and a sandwich. If you haven’t yet seen the trending Grinder Sandwich recipe on your For You page and are curious to know exactly what it is, it’s pretty much a sandwich with a coleslaw-like salad in it. The sub uses all of the same toppings as a classic Italian sandwich, but with a “grinder salad,” made with mayo, lettuce, onion, and a customizable mix of seasonings.

After TikTok user @ohheyimgray posted a video on March 28 of her boyfriend, @joshcookswright, making her the sandwich step-by-step, which she happily referred to as a “sando,” viewers became influenced. Since then, many have taken it upon themselves to recreate the flavor-packed sandwich. The tag #GrinderSandwich has over 9.5 million views on TikTok, and users are not only following the original recipe but also switching up the sub with their own versions of the grinder salad dressing and different types of bread. As @cookiterica says in her April 5 TikTok showing her take on the sandwich, “Sandwiches are very personal. You do what you love!”

You can even serve the grinder salad as an individual dish or even as a chip dip if you don’t have all of the meats and cheeses required for the hoagie. FYI, cold cuts in this recipe can include turkey, ham, salami, capicola, prosciutto, and pepperoni. For cheeses, you’ll want to stock up on provolone, muenster, and freshly shredded parmesan. Of course, you can customize your sandwich to your liking and remove or substitute ingredients as you wish. Although once you scroll through the tag, you’re going to want to try this sub in full — towers of gooey cheeses and creamy slaw included.

Why Is It Called A Grinder Sandwich?

This viral sandwich has been called many names, some of which include: Italian grinder, grinder salad sandwich, grinder sandwich, and grinder. Whatever you choose to call it, the classic grinder is, at its core, an oven-baked meat and cheese sandwich with stacks of fixings on Italian bread. According to a 2013 article in Bon Appétit, this sandwich gets its name from its contents being tougher to chew than a typical sandwich — probably because of the sheer amount of layered toppings. Since your teeth essentially have to grind to bite through all those tiers of meat and iceberg lettuce slaw, the name makes sense.

How To Make An Italian Grinder Sandwich

As mentioned, TikTok users are mainly sticking to the basics of this sandwich recipe and then subbing in certain ingredients based on personal preference. Feel free to do the same with yours since sandwiches are practically made to be customized. The measurements below are from @cookiterica, who tags the original creator @ohheyimgray in her video. Here’s what you’ll need:

1 loaf of soft bread (can be white, Italian, or any bread of your choosing)

Note: The original TikTok includes turkey, capicola, prosciutto, and pepperoni in addition to the ham and salami.

Cut your bread of choice in half. Layer the provolone and muenster cheeses slices on top and put in the oven until it’s nice and melted.

Layer the sliced deli meats on top of the cheeses, then top off with the optional pepperoni slices.

Shred the parmesan cheese and sprinkle on top of the meats. Put the sandwich back into the oven for a few minutes or until the cheeses are melted and golden.

Mix together the mayo, red wine vinegar, garlic, banana peppers, shredded iceberg lettuce, and onions (not required) in a bowl. Sprinkle in the salt, pepper, and crushed red pepper flakes, to taste.

Take some tongs and transfer the slaw to one side of the sandwich. Add more parmesan cheese if you prefer.

Thinly slice the tomato and toss it in lemon juice, salt, pepper, and olive oil, to taste. Layer the tomato slices on top of the slaw.

Assemble your sandwich together and you’re all set. Be sure to keep some extra salad on the side to use as a dip for your chips.

Scroll for some more TikTok tutorials before you whip up your grinder sandwich. Remember the fixings can be adjusted as needed. You own this sub.

Sliced turkey and a brush of rosemary garlic butter on top would take this to the next level.

That drizzle of balsamic vinaigrette at the very end is the stuff of dreams.

More like this
What Is A “Softboy?” The TikTok Term & Aesthetic, Explained
By Courtney Young
American Girl Doll Memes Are Going Viral On Instagram & Tiktok
By Emma Carey
On TikTok, Users Are Sharing Wholesome Theories About The Multiverse
By Courtney Young
Here’s Why Everyone On TikTok Is Getting “Krissed”
By Courtney Young
Get Even More From Bustle — Sign Up For The Newsletter