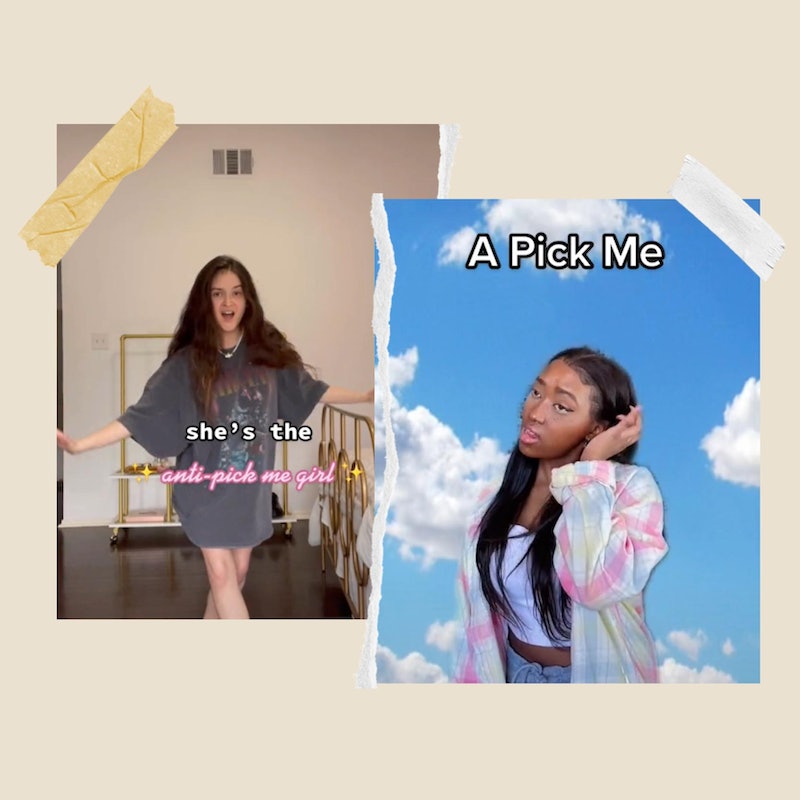 TikTok’s greatest trick is its ability to rebrand things that have always existed. A walk around the block is now a hot girl walk. A person who hits the gym before work and takes vitamins is now that girl. Setting boundaries is now the villain era. A turn-off is now “the ick.” A founding member of this family of internet age definitions is “pick me girl,” which is really just a rebranding of the “not like other girls” trope.

The “pick me” conversation is huge online and became a commonly referenced term on TikTok ever since 2021. The tag #Pickme has four billion views on TikTok and counting, with #pickmegirl collecting two billion views. This may be the first time you’ve heard the phrase “pick me girl,” but if you’ve seen any Amanda Bynes movies from the early aughts, then this concept should be nothing new to you. Between She’s The Man, Sydney White, and What A Girl Wants, Bynes’ characters were the classic “cool girls” of our youth, with their aversion to lip gloss and sundresses, and their “I get along better with guys” energy.

The term “pick me girl” is most often hurled at the “guy’s girl” types. A “pick me girl” might say something like, “I just don’t get other girls,” with the ultimate goal (subconsciously or not) being to get attention or male validation. One user, @trippiereed, says that the wording itself explains the term’s definition: “A pick me person is someone who is behaving in a certain way so they get chosen by someone over someone else.”

Whether you’re a self-identified girl’s girl or a peer-defined “pick me girl,” conversations about the phrase attribute its entire concept to misogyny. Critiques of the term believe that through its definition, women are still centering men in the way they navigate life. Where you fall on the “pick me” scale is parallel to the way you interact with the men in your circle. One TikTok user, @bastardofbolton, put it simply, “A pick me suffers from the crime of internalized misogyny, not the crime of being annoying.”

The “pick me” definition originated on Twitter in 2016 with the hashtag #TweetLikeAPickMe, which involved users mocking one particular genre of “pick me” girls that brag about being “wifey material.” In the years that have followed there has been an unapologetic embrace of the ultra-feminine in terms of fashion, makeup, and proudly labeling oneself as a “girl’s girl.” Euphoria-style glam with bejeweled manicures and artistic eyeliner have replaced the “no makeup” makeup style, and many people are now embracing femininity in what is known online as “bimbofication.”

The “pick me girl” Twitter discourse traces back to 2016.

In 2022, the “pick me” vibe goes beyond hating lipstick, liking sports, or owning a longboard. Videos online share that you can spot a “pick me girl” if they’re someone that puts other girls down, especially when in a group setting with a lot of men. By putting others down, “pick me girls” seek validation and approval from the men of the group and do so in order to get “picked” whether as a romantic interest or as an accepted member the inner clique.

The “pick me” definition has been expanded to include so many different interests and common phrases, and on TikTok, anyone can be given the “pick me” label but it only holds as much power as one allows it. As @trippiereed says: “There’s seven billion people in the world, you can’t say that everyone reacting to something makes them a pick me as well.”

More like this
Why Everyone Is "Soft Tagging" Friends On Instagram Right Now
By Alexis Morillo
This TikTok Song About An Unrequited Romance Has FYPs In Shambles
By Emma Carey
On TikTok, Tinned Fish Date Night Is The Latest Viral Food Obsession
By Emma Carey
TikTok's Butter Board Might Be The New Cheese Plate
By Emma Carey
Get Even More From Bustle — Sign Up For The Newsletter

This article was originally published on May 5, 2022