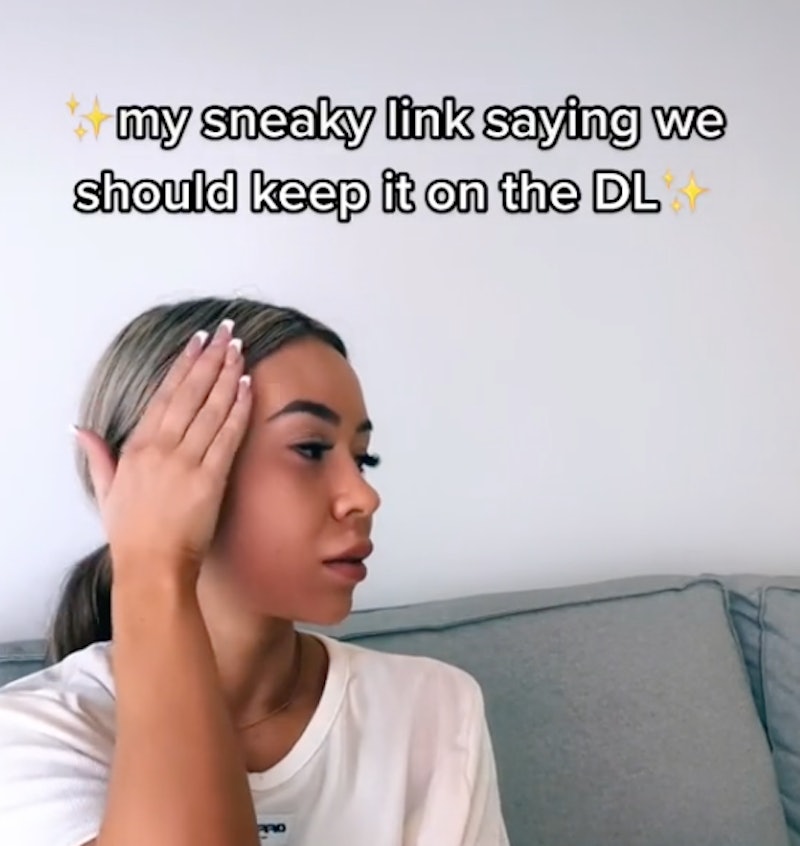 TikTok/alana.lister
By Courtney Young
May 12, 2022

What is a “sneaky link?” Over the last few months, the phrase has blown up on TikTok following the Oct. 2021 release of HXLLYWOOD’s song “Sneaky Link 2.0,” featuring Soulja Boy and Kayla Nicole, whose verse begins, “Boy you just my sneaky link, so don’t keep texting me.” The verse went viral on the app, with the sound overlaying nearly 900k videos of users confessing their secret relationships. The tag #sneakylink currently has more than 3B views on TikTok, but what does the phrase really mean?

How do you know if you have a sneaky link, and how do you know if you’re someone else's? Like any good affair, the business hours are a solid indication of where you stand. If you and your person only meet up when the sun is down, there’s something sneaky going on. Some say the “sneaky link hours” are from midnight to 4AM.

There is risk involved in the sneaky link game. The warning label on a sneaky link reads, “may catch feelings.”

If TikTok tells us anything, sneaky links are far from sneaky. With hundreds of thousands of users sharing text messages and anecdotes from nights with their sneaky links, the only thing kept secret are names and faces.

For some users on TikTok, the sneaky link sound is used as a kind of relationship soft launch. Large creators with communities of followers invested in every aspect of their lives, namely their dating lives, stir up a ton of engagement with their sneaky link videos.

Viral creator @annaxsitar posted her sneaky link soft launch to TikTok at the end of 2021, racking up thousands of comments that echoed sentiments like, “you’re telling me theres 10.9 million of us and NO ONE HAS SEEN THEM IN PUBLIC YET.”

As the sun comes out and cuffing season comes to a close, the summer of the sneaky link is rolling in. If you find yourself hiding your phone from your friends or “working” the night shift, then you may be entering TikTok’s latest million member club.