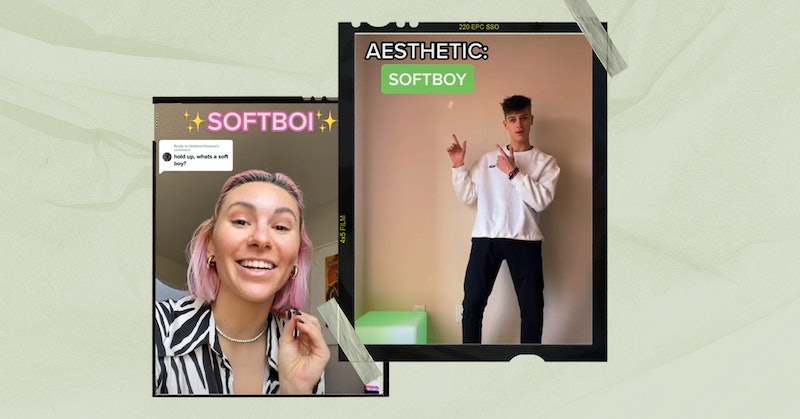 For the last seven years or so, one enemy on the internet has been the “f*ckboy.” The term is typically lodged at men in the dating world who do whatever they want — sometimes to a problematic degree — without hesitation. The term struck a chord with millions online, and stuck around for years, outliving many other internet terms and trends. With the popularization of the term, the f*ckboy community was no longer hidden in plain sight, and in time the mere sight of a single red flag became a complete turnoff for many daters. In response, some of these dudes underwent a total vibe switch up, trading their preppy frocks for cashmere sweaters, and Soundcloud remixes for the “Ultimate Indie” playlist on Spotify. Enter, softboys.

On TikTok, the tag #softboy has nearly 988M views, and the neighboring tag #softboi has more than 233M views of its own. The difference between these two terms is slight. The former spelling typically refers to an aesthetic or style of dress, while the latter is more of a categorization, similar to “f*ckboy.” Both describe a very specific type of guy, one whose artistic vibe borders on performative and who is simply not as deep as he thinks he is. Those who have encountered softboys in the wild report that their behaviors are just a degree of separation away from the “pick me boy” antics. Let’s break it down.

According to the internet, a softboy and a f*ckboy share the same shortage of emotional intelligence, the same inclination to be selfish, and the same end goal. The difference between these two terms is in the approach, with many saying that softboys try to appear deeper, sweeter, and more thoughtful than the archaic f*ckboy trope. One TikTok user, @inkytoks, made an important distinction here. In her view, “all softboi’s are f*ckboi’s but not all f*ckboi’s are softboi’s.”

Like f*ckboys, softboys can be spotted by their interests. One TikToker, @stringbeanboy13, jumped on the app with a softboy joke, captioning his video, “when she invites you over and ‘the smiths live 1984’ and ‘braille skateboarding how to kickflip’ are in her YouTube search history,” implying that a softboy had been there earlier and left his mark.

Another user, @berkeleymom2, shared her experience dating, and ultimately breaking up, with a softboy. Her video, which has more than 300,000 views and 30,000 likes, points out the “nice guy” facade that softboys will put on to avoid accountability.

What Is The Softboy Aesthetic?

The softboy fashion aesthetic is much more forgiving. Popular on the app, the style typically consists of layering, sweaters, Levis, quirky rings – think if a guy raided Emma Chamberlain’s closet.

One user, @thedrewbaker, posted a video of him dressing in the softboy aesthetic, gaining more than 1M views and hundreds of comments like, “love the fit,” and “soft boy is literally my thing.”

Another user, @jjang.e, built his own softboy outfit on TikTok, collecting comments like “literally living for this,” and “you look so damn good.”

These two uses of the word leave the internet divided. The term can be used as somewhat of a compliment for the stylish, and the ultimate insult for the fake deep. Proceed at your own risk.