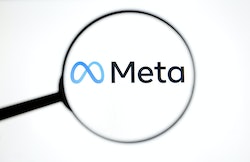 Beam in loser, we’re going shopping. Or that’s what Mark Zuckerberg, CEO of Meta Platforms, Inc., the corporate entity formerly known as Facebook, would probably say. On Oct. 28, via virtual keynote, the Facebook creator announced that the corporation would not just be changing its name, but will also focus on a new dimension of social media — one where the lines between digital and physical presence get very, very blurred. The metaverse is a futuristic reimagining of social media, which Zuckerberg is calling “the next chapter,” rather than a new frontier.

Oh, you’re confused? Same. Let’s rewind before getting into exactly what the metaverse is, or isn’t.

Steps toward a more multidimensional connective experience have been in play for some time. Facebook (aka Meta) has been incorporating augmented and virtual reality into its app offerings since 2014, when it purchased Oculus VR and brought the headset’s gaming and communication technology to the company. But the move to rebrand into full sci-fi territory comes amid renewed scrutiny into Facebook’s business practices, with a whistleblower alleging that the company had been less-than-responsive at controlling the spread of misinformation and hate speech on its platforms. (FYI, Meta is just the corporate name for the company that owns Facebook, the app; that name isn’t changing, nor is that of Instagram, WhatsApp, or Messenger.) Rumors began swirling that Facebook would change its name after the company underwent Congressional hearings in early October, at which the whistleblower testified. For the rebrand, people were expecting something sleek, like “Face,” or a new logo. What people were not expecting was an entirely different social media direction altogether. According to Zuckerberg, per his Oct. 28 post, the metaverse is a lot more than a marketing facelift. Here’s what we know about the future of the Facebook experience.

What Does Metaverse Mean?

“The defining quality of the metaverse will be a feeling of presence — like you are right there with another person or in another place,” Zuckerberg writes in the founder’s letter announcing the name change. “You will be able to teleport instantly as a hologram to be at the office without a commute, at a concert with friends, or in your parents’ living room to catch up.” By his definition, the metaverse is a boundless place where you can live your life online, if you want to. Investopedia, more specifically, defines metaverse as the digital intersection of social media, augmented reality, virtual reality, gaming, shopping, cryptocurrency, and actual reality.

That sounds like a lofty goal, and indeed it is. According to Investopedia, Meta is creating around 10,000 new jobs and investing around $50 million to build the metaverse “in a responsible way.” When it’s done, instead of using Messenger to catch up with a long-distance friend, you’ll use the metaverse to virtually transport yourself to a digital coffee shop to meet up. Instead of going to a store to try on a dress, you’ll pop on a VR headset and using hologram technology to try it on from home. Ditto that virtual meeting: The metaverse will make remote work so convincingly present, there won’t be much of a difference between beaming in and physical being in the meeting room. Indeed, CNET reported in August that Horizon Workrooms, a kind of virtual reality Zoom, has been used internally at Facebook/Meta for months.

You can’t. Not yet. According to cybersecurity expert Kristina Podnar, “Metaverse is a concept,” which is exactly why you might be having a hard time visualizing what it will actually look like.

The idea — to mix together a bunch of futuristic digital technologies to create a 3D space where people can interact — will one day look like a digital universe. “This space will be persistent, so you can think of it as an online world that incorporates real world dimensions (places, sounds, and eventually temperature, smell, and feel) for a full experience of the user,” Podnar explains.

For example, let’s say Adele is putting on a big concert. Instead of going in person or streaming it in 2D from a screen, in the metaverse, you would be able to put on a headset — though not an Oculus one; the company announced that brand name is being absorbed into Meta — and have your avatar be fully immersed in the show. “Essentially, you would be transported and feel like you are at the concert, versus having a passive experience of watching it stream,” Podnar adds.

Is The Metaverse Safe?

While right now the metaverse might seem like a plot line from a movie starring a blue-haired cyborg villain and probably Keanu Reeves, Podnar says it’s actually a concept that other big tech companies have been working towards for a while. “The race is on to create the metaverse, and the question is will Facebook get there first? Or will it be another tech company? And when it is created, will we be able to control the experience?” she says. It will be a long time before we are able to see all of the privacy and security risks that will be associated with the metaverse and its applications, Podnar says, noting that surely, “there will be many.”

But as with the privacy concerns, it will be hard to see the IRL implications of the metaverse until it’s here — and that might be 10 or 15 years away. As more tech giants shift toward similarly immersive experiences, you’ll have to adjust your comfort levels to meet all that comes with the new technology. Just like you did when you first dipped your toes into the world wide web.

More like this
26 Ghost Story Podcasts To Get You Ready For Halloween
By Jessica Booth, Mia Mercado, JR Thorpe and Emma Carey
20 Smart Devices Under $35 That’ll Change The Entire Vibe Of Your Home
By Emma Carey
Here's How To Get Your iPhone To Update Automatically Forever
By Emma Carey
30 Clever Ways To Slide Into Your Crush's DMs
By Griffin Wynne, Carolyn Steber and Lexi Inks
Get Even More From Bustle — Sign Up For The Newsletter