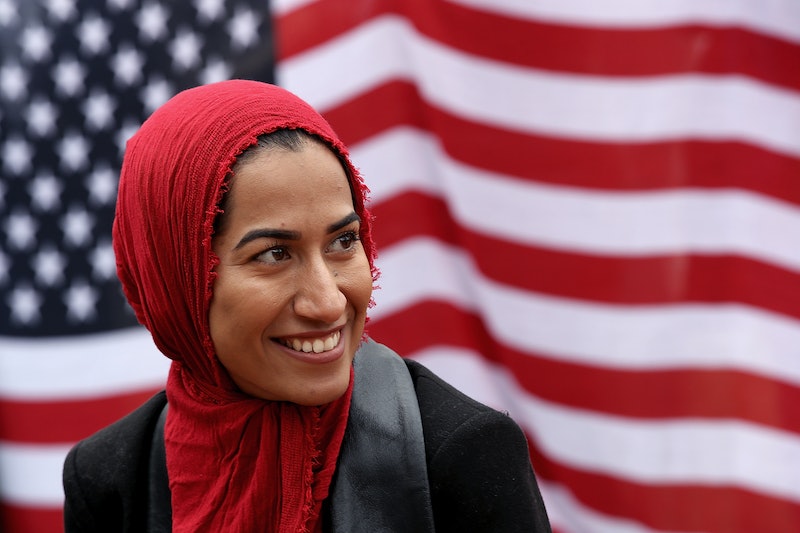 Every year, activists, allies, and media come together on this date to celebrate Muslim women and share stories to shout out empowering Muslim women, as an effort to fight back against hurtful stereotypes and hateful rhetoric. MuslimGirl.com’s Editor in Chief Amani AlKhat tweeted back in 2017 about why the day was important. "In current climate, Muslim women are rarely given the space to be heard above all the noise," she wrote.

MuslimGirl also explained exactly what the day means, and what you can do to support it:

This is a day to celebrate Muslim women and flood the Internet with positive representations of who Muslim women are. Anyone can take part, from uploading pics on social media of the Muslim women in your life to showing some love to your favorite Muslim women accounts to follow. One of the easiest ways you can create space for Muslim women is simply by hitting share or retweeting #MuslimWomensDay content on your social media and elevating the stories you care about.

The theme for 2022 is called “Securing Our Space” and according to the MuslimGirl site this theme is meant to speak on the movement toward “carving our place in every space and proclaiming that we are here and we are not going anywhere. It’s us holding that space by us, and for us.”

How To Celebrate Muslim Women’s Day 2022

To participate in the celebration, use the hashtag #MuslimWomensDay on all social media platforms and follow @muslimgirl to keep up with their coverage on March 27. This year, in a partnership with Twitter, MuslimGirl is hosted a design contest to crowd source submissions for the highlight graphic that will be seen by millions of Twitter users.

Additional ways to become involved with Muslim Women’s Day celebrations include finding events near you, like a Muslim Women’s Day Solidarity Walk or a digital panel like this fireside chat being organized by Muslim Women Professionals. Supporting Muslim creators is also a way to show your support on March 27 and always.

More like this
25 Inspiring Quotes From Black Women To Celebrate Black History Month
By Kyli Rodriguez-Cayro and JR Thorpe
24 History-Making Black Women You Probably Didn't Learn About In School
By Ayana Lage and JR Thorpe
8 Things You Can Do To Appreciate Lunar New Year
By Elizabeth Tsung
8 Charities To Donate To During Black History Month
By Alexis Morillo
Get Even More From Bustle — Sign Up For The Newsletter
From hair trends to relationship advice, our daily newsletter has everything you need to sound like a person who’s on TikTok, even if you aren’t.

This article was originally published on March 26, 2018