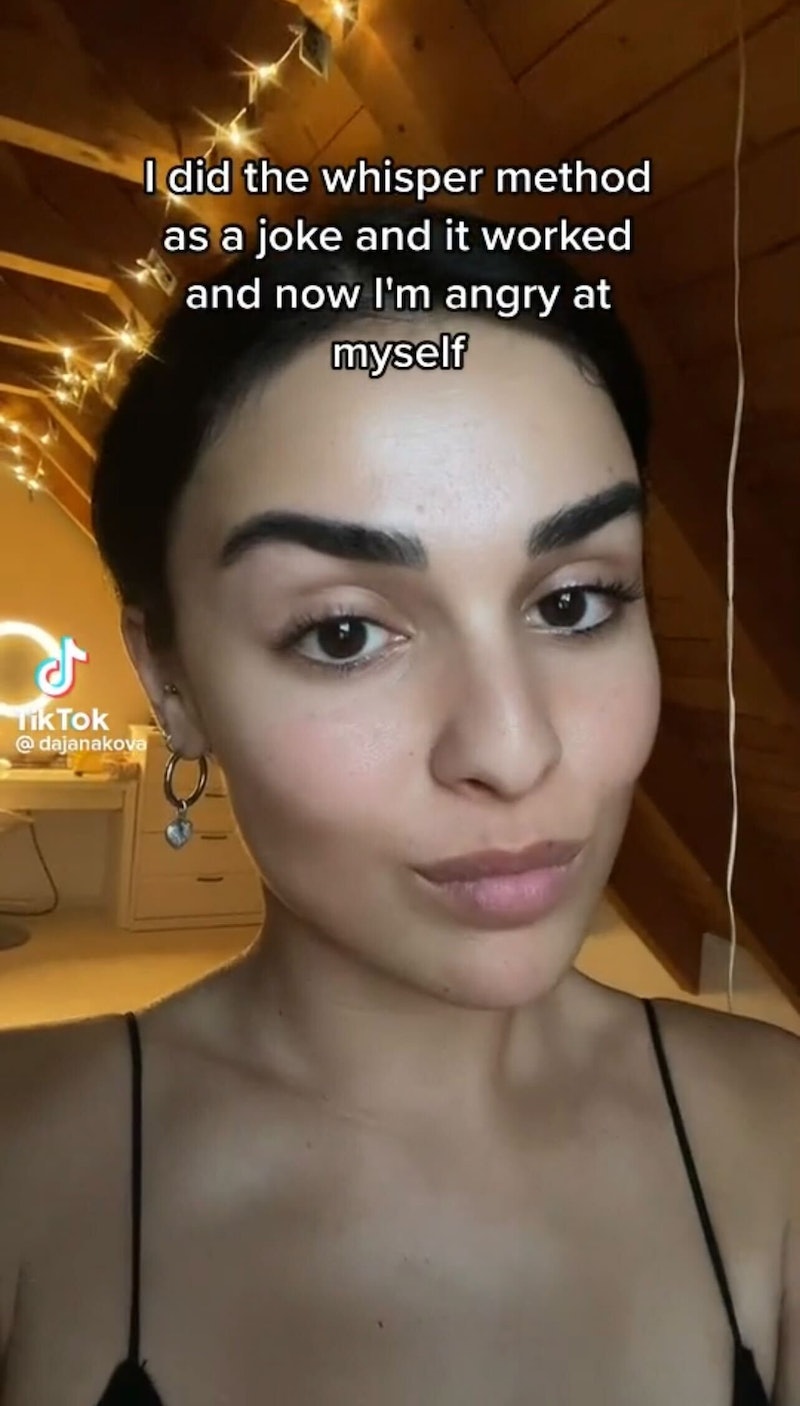 TikTok creators are encouraging people to take their life into their own hands and participate in a new manifestation practice called the Whisper Method. There are tons of new ways to manifest financial, professional, or romantic success, each shared on TikTok, specifically #ManifestationTok and #WitchTok everyday. After the Whisper Method was introduced to TikTok users in early April 2022, it quickly gained attention, with different astrologists, witches, and wellness content creators giving their instructions on how to properly employ the practice.

One of the pioneers of this manifestation technique, @HotHighPriestess, introduces the trend as one of the easiest methods for manifestation, saying it’s also an incredibly effective method used for bringing to life your greatest want or need. The Whisper Method allows the user to associate their wish with a specific person. Envisioning the life you want has become popular among TikTok users, and making a mental picture of your desires is thought to be more powerful than simply asking for them. This Whisper Method encourages people to use visualization instead of wishing. Think of what it is you want, associate that wish with a person, and envision yourself whispering your needs or dreams into that person’s ear. It’s as simple as that. With over 46.3 million views on the hashtag #WhisperMethod, it’s clear that people aren’t scared to give this practice a go.

In her April 2022 video, @HotHighPriestess suggests starting the practice by envisioning what change you’d like to see in your life — whether you’re trying to get a promotion at work, you want your crush to ask you on a date, or you want to find your dream apartment. Now, associate that want or need with a person — your boss, your crush, your partner, or even your real estate agent. Then, close your eyes and view that person where they could be at this moment — their house, their office, etc. Picture yourself walking up to that person, Casper the friendly ghost style, and whispering in their ear what you want them to do three times in a row. “I want you to ask me to be your partner. I want you to ask me….” You get the gist. Lastly, view yourself kissing them on the forehead, and as you metaphorically walk out of this vision, view them doing that act for you right then and there.

How Did The Whisper Method Go Viral?

On April 5, @HotHighPriestess posted an explainer to the Whisper Method. She described to her 1.6 million followers how she individually practices the method. This video, which gained the attention of three million viewers, caused the method to explode in popularity — inspiring other mindfulness creators to introduce the trend to their followers which established a platform-wide understanding of the method. People started doing the Whisper Method as a joke, to which they found surprising success.

In @bitchcraft444’s April 27 video, Chloe introduced the technique to her over 122,200 followers, saying the method includes intentional thinking, visualization, and energetic vibration. Unlike @HotHighPriestess, Chloe said other methods like the 369 Method and the Pillow Method are known to take up to two weeks, whereas with the Whisper Method you’ll notice instant gratification. She encourages clear authenticity when deciding what you want and who you’ll be whispering to in order to make your wish come true. Chloe’s video quickly received over 2.1 million views.

After mindfulness TikTok creators like @bitchcraft444 and @HotHighPriestess expressed their suggestions, people started chiming in to share their skepticism that eventually resulted in success. @DajanaKova posted a video on May 24 in which she said, “I did the Whisper Method as a joke and it worked and now I’m angry at myself.” Dajana’s opinion on the speed of the manifestation was different than Chloe’s, as she said the manifestation could take anywhere between a few hours to a few weeks to come to fruition. People started flooding Dajana’s comment section, with one person writing, “IT WORKED. Took 2 days” and another person saying, “I DID IT AS A JOKE AND NOW IT'S KINDA HAPPENING AND I KINDA REGRET IT.” It’s clear some people underestimated the power of the Whisper Method and because the internet cycles through so many new manifestation techniques everyday, it’s hard to know which ones are credible and not a TikToker just trying to gain fame.

Since then, people have continued sharing their journey with the Whisper Method, instead of explaining it, recalling real life instances in which the technique worked. According to the videos that have gone viral, most people are using the Whisper Method to attract their ideal lover. @ValeriaFune gained over 8.6 million views for her video where she recalled an instance in which she used the technique to maintain a relationship with someone. She recollects a sentence that was told to her the night after she used the Whisper Method. “I just randomly started thinking about you so much. Can we please talk and fix things? Please, I love you.”

This trend of including what happened after using the Whisper Method and giving the technique responsibility became all too popular on the FYPs of millions, leaving people who wanted to learn about the technique in the dark. Many people would comment on these videos asking for a tutorial because they weren’t on this side of TikTok back in April when people were still explaining the trend.

After seeing the technique go viral, on July 19, @HotHighPriestess made her way back to the FYP and explained the method that she brought awareness to months ago. Instead of explaining the method right away, @HotHighPriestess recommends people pair the Whisper Method with self concept work, visualizing yourself as the person you want to be when your goal is redeemed. So instead of making the method all about getting what you want from someone else, the practice becomes more intentionally individual, relying on yourself to gather the strength and courage to realize what you deserve.

More like this
Ashamed Of Your Screen Time Stats? Here's How To Change That
By Alexis Morillo
Learning To Love, Not Judge, The Lunchbox Wives Of TikTok
By Esther Zuckerman
I Spent 2 Years Trying TikTok’s Dating Advice
By Kailynn Johnson
How To Turn Off TikTok Profile Views So You Can Stalk Other Accounts In Secret
By Alexis Morillo
Get Even More From Bustle — Sign Up For The Newsletter
From hair trends to relationship advice, our daily newsletter has everything you need to sound like a person who’s on TikTok, even if you aren’t.