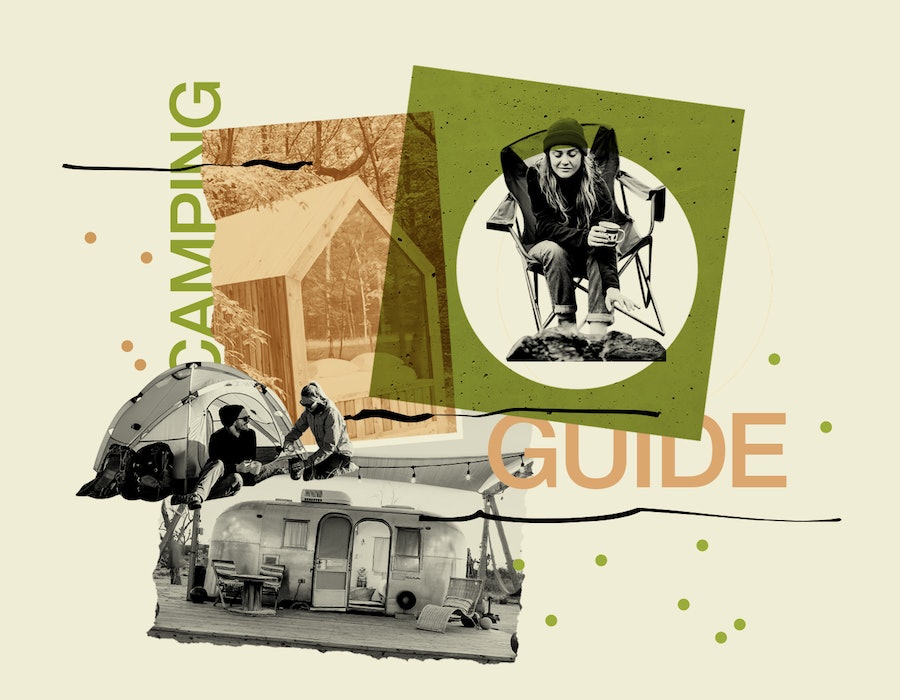 Elena, 32, just moved back to her hometown of Austin after a decade in New York City. Before leaving the northeast, her and her boyfriend did one last camping trip to Clarence Fahnestock State Park in upstate New York in November.

“There aren't usually a lot of people around, which is nice,” Elena tells Bustle of cold weather-camping. “It's super quiet."

Another benefit? She says there also weren’t any mosquitoes or bugs around. “We just took a really nice, leisurely nature walk with our whiskey.” She only saw one other group nearby, which made the trip even more relaxing. "When there’s more people around, it doesn’t feel as secluded."

Campgrounds and national parks like Joshua Tree National Park in California, New York’s Catskills Mountains, and the North Carolina mountain town of Asheville and its surrounding parks and campgrounds, were all popular destinations for novice and routine campers alike in 2020 as space is one of the greatest benefits for travel destinations during the pandemic. While camping may not automatically come to mind when you’re dreaming of winter vacations — especially if you've never been before — there are tons of safe options to consider, whether you’re seeking warmer weather or your own shower. And, during these colder months during the off-season there’s fewer people on campgrounds that stay open, meaning there’s even more space for you and your quarantine crew.

Camping In Your Car

Provided you have the right-sized vehicle, car camping is an option if you’re more into a road trip vacation — or want to get to a warmer part of the country. After being out of work as a result of the pandemic, 26-year-old Stephanie and her boyfriend planned a long road trip from their home in San Francisco, CA.

“We drove to L.A. first, then made our way to Joshua Tree National Park. Our goal was to see the Grand Canyon,” she tells Bustle. “In between, we saw Sedona, Arizona, Lake Havasu — which was like a pit stop — and took Route 66 to see all the different crazy stores and restaurants there.”

They stayed on campsites through the Bureau of Land Management, which offers a variety of camping options on public lands ranging from free to a small fee, and managed to find sites that cost them nothing.

“This was our first time winter camping,” she says. They had an air mattress for small-sized SUVs that she says was surprisingly comfortable and a two-person sleeping bag meant for 30-degree weather. “Our learning there was to maybe do separate sleeping bags for less warmth to escape and the zero-degree rating would be best.”

She also recommends covers for the windows that not only keep light out and allow you sleep past sunrise, but also keep more heat inside the car. While they didn’t use them on their trip, she says they will be using them on the next one.

“I think the best thing about a road trip and sleeping in your car is the ability to stop anywhere, she says. “We stuck to a general plan but just knowing we could drive anywhere to check out something we'll never probably see ever again is my favorite part.”

Natasha, 31, who lives in Madison, Wisconsin, decided to try cold-weather camping with her husband after backpacking with a group of women in October. “He went out and bought all the camping stuff after my trip, and we wanted to try it out at least once before the season was over,” she tells Bustle.

“We went to Blue Mound State Park, like 30 minutes away from us, just to try out our equipment, but it was an extremely cold night,” she says. “By around 1 a.m., we just decided to throw into the towel and drive home.”

While they had a three season tent, an inflatable sleeping pad, sleeping bags rated for 15- and 20-degree weather and layers to sleep in, Natasha knows exactly what she’d do differently for their next winter trip.

“I think we needed another thin foam sleeping pad layer to help to keep our warmth from going into the ground,” she says. She’s since purchased one, although they will probably wait until spring to head back out.

If heat and a roof is a non-negotiable, but you’d still like to immerse yourself in the outdoors and feel as remote as possible, options like Upstate New York’s Gather Greene in Hudson Valley can be that. Their 17 cabins are a tiny bit wider than the king-sized bed within them, have a bathroom, shower, and mini fridge with one entire wall of glass overlooking the Berkshire Mountains.

Joshua Tree Acres has a fleet of airstreams to rent, and in Asheville, NC, there’s a variety of glamping options — yurt or deluxe dome tents to treehouses — that offer the space and scenery without building your own accommodations.

Packing For Your Camping Trip

No matter what type of camping you decide works best for you, the nature of winter camping requires a thorough plan. You'll also want to make sure to check on the rules, restrictions and impact of the pandemic before heading out.

Elena recommends splitting up your list among your camping crew to make sure all of your bases are covered. “Whenever we go camping, I'm always in charge of the cooking aspect,” she says. Her her cast iron skillet is a necessity. “It works for everything! I’ve done Dutch babies for breakfast with some sort of fruit also cooked in the skillet. I usually do steaks for dinner with caramelized onions, and I always take foil which is perfect for wrapping veggies and throwing straight onto the coals.”

And, her campsite cooking pro tip: “If you’re making s’mores on a stick, you’re missing out on smoked s’mores. Wrap everything in foil and throw on the coals — so delicious!”

Stephanie says there's one thing that may not be deemed absolutely necessary by others but offered her the most comfort — her skincare routine. “I would just feel icky when I woke up.” She carried a tiny Sephora brand cleansing pad to wash her face and exfoliate. Additionally, the women say moisturizer, lip balm, and SPF are absolutely necessary for your travel, whether you're going out in cold weather or you're camping in the desert.

No matter what your camping trip involves, being responsible and respectful for the grounds you’re staying on, packing efficiently, and staying warm are the way to go. Here's what to bring, for whichever type of camping trip you decide to embark on.