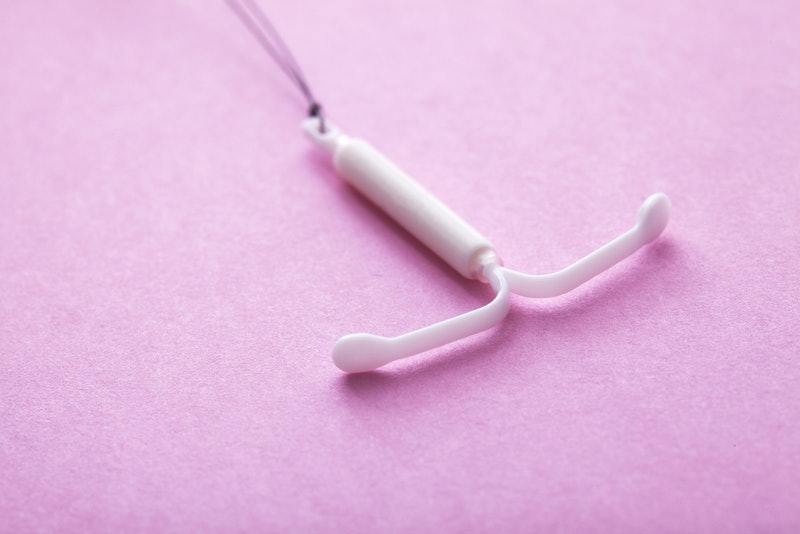 Access to contraception in the UK is under threat because of cuts to services across England, according to a new report from the Advisory Group on Contraception (AGC). In fact, almost half of local councils in England have closed sites offering contraceptive services since 2015 — and that's particularly problematic for people seeking long-acting contraception, like the implant or the coil.

After sending a Freedom of Information request to every local authority in England, the AGC found that 74 of them — that's 49 percent — have "reduced, or plan to reduce, the number of sites commissioned to deliver contraceptive services in at least one year between 2015/16 and 2018/19." And the rate at which services are closing has increased, too. Between 2015 and 2016, 12 out of 138 councils shut down contraceptive services, while between 2017 and 2018, 33 out of 140 did so; that's an increase in closures from 9 percent to 24 percent.

These cuts particularly impact those seeking long-acting reversible contraception (or LARC). That's the copper coil or intrauterine device (IUD), the hormonal coil or intrauterine system (IUS), and the contraceptive implant. Fitting these requires specialist training, but as a result of limited funding, fewer doctors are able to provide this service. A 2017 report by the AGC reveals that practices "are often not reimbursed the full costs of providing a LARC fitting service," including "the cost and time requirements of training and maintaining healthcare practitioners with the qualifications to fit LARC."

What's more, many GPs with this training are soon to retire, the AGC reports, without adequate younger doctors to replace them. The number of prescriptions for the coil or the implant in England has already dropped — by 8 percent between 2014 and 2016, according to to data from Public Health England.

A startlingly low proportion of GP practices actually offer all the methods of contraception available on the NHS, Bekki Burbidge, Deputy Chief Executive of sexual health charity FPA (formerly known as the Family Planning Association), tells Bustle. "When we surveyed GPs, we found that only 2 percent of practices were offering the full range of contraception methods," she revealed.

Why's this so problematic? Well, long-acting contraception enables users to "fit and forget," Burbidge says. Alternatives like the contraceptive pill, meanwhile, depend on the user taking the medication at approximately the same time every day. According to the NHS, the IUS can last for either three or five years, depending on the brand, while the IUD can last five to ten years, and the implant lasts for three years.

They're all over 99 percent effective, Burbidge says. Plus, they come with other benefits, the NHS says: the IUD is hormone-free, while the IUS is safe for those who can't use the combined pill, and the implant is suitable for those who can't take contraception with oestrogen. A recent study by researchers at the Keck School of Medicine, at the University of Southern California, found that IUDs could even decrease users' chances of contracting cervical cancer, as the Guardian reports.

Burbidge tells Bustle that people who can't be fitted with LARC at their nearby GP or contraceptive clinic might struggle to receive this service elsewhere. "If getting contraception requires multiple visits, long waits for an appointment, or needing to travel to an inconvenient location, then it creates barriers to accessing these methods," she explains.

So what's behind the cuts to services? The AGC points to "repeated government cuts to the public health budget," noting that "two thirds of local councils have cut their sexual and reproductive health (SRH) budget since 2016/17." And it's no coincidence that budget cuts often target contraceptive services, FPA's Bekki Burbidge believes. "A lack of funding is affecting healthcare services across the board but often sexual health services are the first to be cut," she says. I've contacted the Department of Health and Social Care for comment, but haven't yet received a response.

According to the AGC, over 6.2 million people with uteruses between 15 and 49 now live in an area where the number of sites providing contraceptive services has been cut, and 8 million live in an area where broader sexual and reproductive health services have seen a decrease in funding. And that's a major issue. Contraception can offer people control over their bodies and sex lives; what's more, it can minimise painful, heavy, or otherwise problematic periods. To limit access to contraception is to threaten the bodily autonomy of people with uteruses; the closure of contraceptive services, therefore, is a trend that must not be ignored.