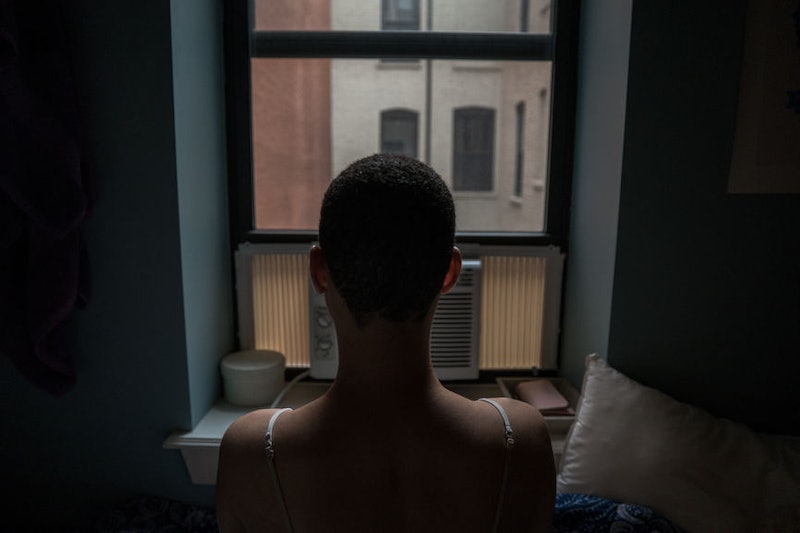 "The next Labour government will protect all women," promised Dawn Butler, shadow home secretary for women and equalities, at the Labour Party Women's Conference last week. How does the party plan to do so? In part, by requiring employers to provide their staff with up to 10 days of paid leave should they experience domestic abuse, a law that would see the UK follow the Philippines, New Zealand, and some Canadian provinces. So how would Labour's proposal for paid leave for domestic abuse survivors protect women, and what do the experts think?

"Domestic abuse is a hidden killer and remains at epidemic levels," Butler said at the conference, held in Liverpool on September 22. She cited the Office of National Statistics' most recent survey on domestic abuse, which revealed that 1.2 million women in England and Wales — or 7.5% — experienced some form of it in the year leading up to March 2017. The survey also said that an estimated 26% of women between the ages of 16 and 59 had experienced domestic abuse since turning 16 — that's about 4.3 million female survivors.

"Employers have a duty of care to employees experiencing domestic abuse," Butler continued. A Labour government, she announced, would mandate that all employers establish a "domestic abuse employment policy," as well as provide paid leave. The latest country to establish 10 days of paid leave for those experiencing domestic violence, as Butler noted, is New Zealand, which passed the measure in July 2018. The Philippines, according to the BBC, passed a similar law in 2004, while the leader of the Australian Labor Party, Bill Shorten, has promised the same if his party comes into power. Canadian provinces Manitoba, New Brunswick, and Ontario offer five days of paid leave.

Katie Ghose, chief executive of Women's Aid, tells Bustle that the extra paid leave could prove crucial for people attempting to leave abusive households. "It could allow somebody to have a little bit of time off for appointments — for example, if they need to be taking control of their finances," Ghose says. "Or they could use the time to leave home and move into a refuge or other place."

Alternatively, survivors might use the time to attend court, manage their children's schooling, or receive medical care, says Jennifer Cirone, senior manager for supported accommodation services at Solace Women's Aid. "Even when a woman has left the abusive situation, there are practical and emotional needs for many months and years after," she says. "One way to think of it is to provide some breathing space, to allow a survivor to be supported along the right path to long-term recovery."

What's more, Cirone explains, work can provide "economic freedom" for people experiencing domestic abuse. Paid leave "would give survivors confidence that they can be supported to explore options whilst retaining their jobs," she says. This could be especially crucial for victims of financial abuse, which Women's Aid defines as "a perpetrator using or misusing money which limits and controls their partner’s current and future actions and their freedom of choice."

And there's another, simpler reason for workplaces to employ a domestic violence policy, Katie Ghose points out: work might be the only place a survivor is away from their abusive partner. "It may be the only avenue to access the support she needs," she says.

According to Ghose, some employers already have policies in place to support staff members who are experiencing domestic violence. "They've named domestic abuse champions, and they have information available and posters up signalling that it's a safe place," she says. But other workplaces aren't so advanced, so employees might not currently feel comfortable turning to their bosses about suffering abuse, she acknowledges. "The confidence of women in speaking to their employers is going to rely partly on having positive messaging visible in the workplace," she says.

However, there are limitations to who Labour's proposal would help; for instance, unemployed people, people working unreliable hours, or people who work in multiple locations might not have regular contact with a manager. "If you don’t have a team of workmates or colleagues you can be even more isolated," Ghose says. "But we know that whether you are on a low-paid zero hours contract or in a high paid profession, you could be suffering domestic abuse." She recommends survivors call the 24-hour National Domestic Abuse Helpline on 0808 2000 247 to be advised of the local services available to them, or consult the Women's Aid website.

Labour's proposal comes as the current government prepares a new domestic abuse bill, which went out for public consultation between March and May of this year. Writing in the Guardian, prime minister Theresa May revealed the bill will emphasise non-violent coercive control as a form of abuse, introduce new domestic abuse protection orders, and enable stricter sentences for abuse cases where children are involved. May also promised to establish "a sustainable funding model for refuges so that there is no postcode lottery." On a single day last year, as Katie Ghose told Bustle, 94 women and 90 children seeking refuge were turned away.

In a press release, Women's Aid commended the government's commitment to sustainable refuge funding, but added, "we want to see a Domestic Abuse Bill that encompasses and goes beyond changes to the criminal justice system," pointing out that many survivors aren't able to take their abuse to the police. The bill, Women's Aid said, "must reach beyond a criminal justice response to include policies on housing, education, health, immigration and the welfare system to name but a few, so that all survivors and their children get the support they need, when and where they need it."

Campaign group Sisters Uncut, who protested the bill at the 2018 BAFTAs, argued in the Guardian that the government's proposals would "put yet more power in the hands of the police, courts and criminal justice system." They noted that "similar policies to those in this bill have, in the U.S., led to an increase in the number of survivors being arrested, especially black, minority ethnic and disadvantaged survivors."

The group added, "If the government truly wants to tackle domestic violence, power should be given back to survivors — by properly funding sorely-needed specialist services and refuges." Sisters Uncut also cast doubt on May's claim in the Guardian that refuge bed spaces have increased by 10% since 2010, noting that 60% of women were turned away from refuge in 2016 to 2017.

Imkaan, a Black feminist organisation "dedicated to addressing violence against Black and minoritised women and girls," produced an "Alternative Bill" which emphasises supporting women's organisations over a strengthened criminal justice system. Leah Cowan, policy and communications coordinator for Imkaan, said that their bill "provides an framework for addressing violence against women and girls, directed by an intersectional lens, which acknowledges the needs of women and girls living at the intersections of different oppressions such as racism, border violence, and poverty."

Amongst Imkaan's proposals are the implementation of primary prevention education in schools, an increase in "move on support" for domestic violence survivors, and the delivery of training to staff members in the criminal justice system on violence against women and girls. Imkaan also calls for the abolition of the government's no recourse to public funds rule, which can prevent women accessing health and other services because of their immigration status. I've contacted the Ministry of Justice for comment on the criticisms of the proposed bill levelled by Imkaan, Sisters Uncut, and Women's Aid, but haven't yet received a response.

"As the government looks to introduce a new law, the question of resources has to be looked at hand in hand," Katie Ghose of Women's Aid tells Bustle. At present, Ghose says, there's only a "patchwork" of disconnected services available across the country. "Local domestic abuse services do a lifesaving job on a shoestring. We need to see them properly resourced."

"All of us want to know that our mother, our sister, our friend, wherever she lives, can get the support and access to services she needs."