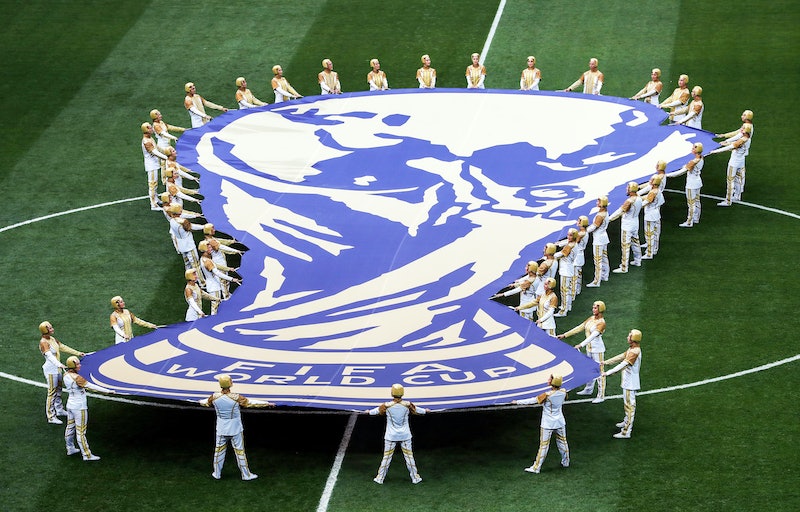 A bleak finding in the wake of the 2018 World Cup: England and Wales saw a "significant rise" in domestic abuse reports during this year's tournament, according to the BBC. The figures per game, released by the National Police Chiefs' Council, far outstripped those from Euro 2016 — after England's semi-final defeat against Croatia this year, 64 incidents of abuse were reported, while the highest figure during Euro 2016 was 24. So why did the World Cup 2018 see a rise in domestic violence, and how significant is the correlation between the two?

Deputy Chief Constable Mark Roberts, football policing lead, said of violence associated with the World Cup, "While the picture in Russia was positive, at home in England it was completely the opposite with record numbers of incidents for the police to deal with, even when the team was performing well." He added, "The bulk of these were alcohol-fuelled and depressingly we saw significant rises in incidents of domestic abuse." Figures indicate a rise in domestic abuse reports as the tournament progressed; the number of reports climbed from 24 after England played Tunisia, to 62 in the England v Sweden quarter-final and 64 after England was knocked out by Croatia.

Deputy Chief Constable Louisa Rolfe, who leads domestic violence policing for the National Police Chiefs' Council, stated, "Football does not cause domestic abuse but these figures suggest an increase in incidents during key England fixtures." She continued, "Whilst emotions may run high, there is no excuse to abuse your partner."

The figures released by the NPCC aren't the first to suggest a correlation between football and domestic violence. At the start of the World Cup, as the BBC reports, the domestic abuse charity Pathway Project tweeted a disturbing statistic. "Domestic Abuse rates increase by 38% when England lose," the tweet states. The statistic is drawn from a 2013 study by researchers at the University of Lancaster; it concluded, according to the Independent, that "instances of domestic violence rose by 38 per cent when the England team lost a game and by 26 per cent when the team won or drew." The National Centre for Domestic Violence broadcast a similar message with their campaign, "If England gets beaten, so will she," as the Independent reports; it features graphic imagery of bleeding victims of abuse.

According to Sky, several UK police forces supported the Give Domestic Violence the Red Card campaign, and more officers were deployed in multiple areas across the country to respond to domestic abuse reports. In a press release from Cleveland Police, Specialist Crime Superintendent Anne-Marie Salwey said, "The World Cup, as with other major sporting events, is often associated with an increase in incidents of domestic abuse because of factors such as increased alcohol consumption and an increase in tension."

Experts on domestic violence have stressed, however, that such abuse should not be directly attributed to football. Sandra Horley, chief executive of Refuge, told Refinery29, "Domestic violence is systematic, patterned behaviour on the part of the abusive man designed to control 'his woman'. Blaming football or alcohol absolves the perpetrator of responsibility for his actions." Horley added, "Domestic violence is a choice perpetrators make, and the vast majority of men who enjoy football do not choose to abuse their partners."

Katie Ghose, chief executive of Women's Aid, told the publication, "Categorically, football does not cause domestic abuse; the behaviour and actions of abusers who exert power and control over their victims cause domestic abuse." She continued, "However, domestic abuse does not happen in a cultural vacuum. The sexist attitudes, chants and behaviour at football matches encourage an environment in which women are belittled and demeaned."

Writing in the Guardian, columnist Eva Wiseman said, "There are many millions of football fans who choose not to abuse their girlfriends: blaming the game and the booze seems, slightly, to absolve those that do." She also observed, "While anger is noisy and violence bruises, the more insidious evils, such as emotional abuse and financial control, remain largely unrecorded and unreported."

Ultimately, while the horrifying figures released after this year's World Cup are a rightful cause for concern, it's vital not to draw too direct a line between domestic violence and major football events. To do so is to lessen the responsibility of abusers — and to minimise the violence women face in the home on a daily basis. As Sandra Horley of Refuge told the BBC, "Women experience violence and abuse at the hands of their partners every day, not just when the football is on TV."