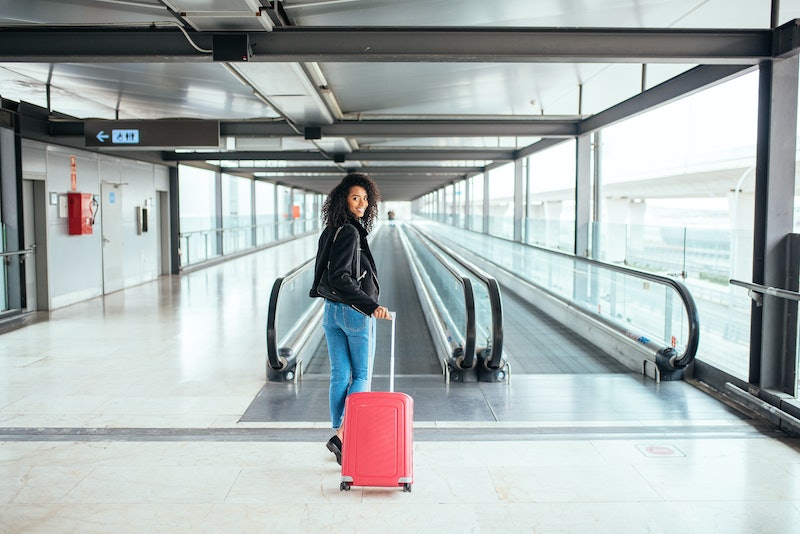 Long security lines, lost luggage, missing your trip because you’re running late — there’s so much that can go wrong when you’re traveling. CBD sellers say the non-psychoactive cannabis compound can help with the kind of stress traveling causes, but can you travel with CBD in the United States?

CBD has shown some promise in treating social anxiety, according to a 2011 study published in the journal Neuropsychopharmacology. That makes it an attractive choice if you want a natural solution to your travel woes.

But because of conflicting and often confusing state and local laws, it can be hard to know where it’s legal just to buy CBD, let alone travel with it. But if you do some research before your trip, you’ll have an idea of whether your CBD treats can join you on vacation.

Cannabis lawyers say it’s pretty low-risk to take CBD with you on your next vacation within the United States, but they note it also depends on your method of travel and where you’re going. Attorney Lauren Rudick tells Bustle that while you could get in trouble having CBD in states like Idaho and Nebraska, which have outlawed CBD, you usually won’t have any problems traveling with it in other states, as long as it’s compliant with their laws.

“There really shouldn’t be an issue,” Rudick says. But there are a few other things travelers should know.

What If I’m Taking A Flight?

Bringing CBD in your carry-on luggage could cause problems if you’re flying. Although TSA officers aren’t searching your bags looking for your CBD oil specifically, if they do find it, they might alert law enforcement officers, who will then handle the situation however their state laws dictate.

“I wouldn’t be too concerned about traveling with CBD,” says David Wunderlich, CBD practice lead at Colorado law firm McAllister Garfield. “Generally, TSA is charged with protecting the safety of the airport.”

The Transportation Security Administration’s website backs up what he’s saying — security is the agency’s priority, so agents are more likely to make sure you take off your shoes and don’t bring any weapons into the airport.

That does not mean you’re off the hook if you’re traveling with CBD, though. From the agency:

Accordingly, TSA security officers do not search for marijuana or other illegal drugs, but in the event a substance that appears to be marijuana or a cannabis infused product is observed during security screening, TSA will refer the matter to a law enforcement officer.

What About A Road Trip?

Having CBD in your car shouldn’t cause any major problems in most of the United States, but you should check state laws before embarking on a cross-country adventure. As Rudick notes, in some states, getting pulled over with CBD could result in fines or jail time.

For example, a California woman was charged with felony drug possession in Wyoming last year after police found a bottle of hemp-derived CBD oil in her purse (they arrested her for allegedly driving with a suspended license). Officers said the CBD oil tested positive for THC, although a deputy prosecutor acknowledged that the law on CBD products in Wyoming was unclear and the charge was ultimately dismissed.

What About Going On A Cruise?

Do you panic at the thought of cramming onto a boat with thousands of other people? It may seem like a good idea to bring CBD along to take the edge off, but leaving it on land is probably for the best. Carnival Cruises explicitly forbids CBD, while Royal Caribbean tells Bustle they don’t allow “any cannabis-derivative products (including CBD products).” Norwegian also says they prohibit CBD on its ships. While there’s no CBD policy available online for Disney cruises, it does forbid medical marijuana.

Travel is already stressful, so if you’re worried about having CBD on you, it may be best to leave it at home. Otherwise, do your research ahead of time to make sure bringing CBD won’t cause any vacation hiccups.