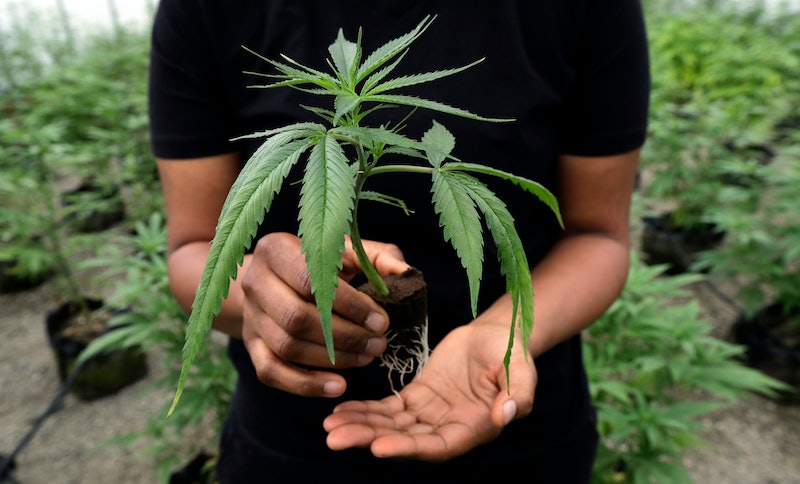 In this op-ed, Madeline Martinez, chairwoman of the board of the National Organization for the Reform of Marijuana Laws (NORML) Women’s Alliance, explains why you must push for full legalization of cannabis if you’re all about using CBD.

Cannabis has gotten tons of new supporters in recent years, thanks to so many people trying and loving one of its compounds, the non-psychotropic cannabidiol (CBD). But many of these new supporters, while enthralled with the effects of CBD, have not advocated for a meaningful change in federal policy that recognizes what science has proven about cannabis.

As a 68-year-old former corrections officer and proud Mexican-First Nation woman, I am all too familiar with how the war on drugs has broken our justice system and how the war on cannabis has specifically been rooted in marginalizing me and people who share my heritage.

Racism was the cornerstone of prohibition from the start. In the early days, Americans were familiar with and fond of the hemp plant, but a career law enforcement officer’s campaign to conflate hemp with marijuana confused people into thinking it was a dangerous drug pushed into white American communities by people of color — specifically, Mexicans.

After the end of alcohol prohibition in the early 1930s, Harry Anslinger began a national drive to ban cannabis, motivated through hate and racism. Some of his most famous quotes include, “Reefer makes darkies think they are as good as white men,” and “There are 100,000 total marijuana smokers in the US, and most are Negroes, Hispanics, Filipinos and entertainers. Their Satanic music, jazz and swing, result from marijuana usage. This marijuana causes white women to seek sexual relations with Negroes, entertainers and any others.”

Using racism as a tool to drive fear of substances, Anslinger pushed for the creation of his own bureau in 1930 to enforce the new prohibition — the Federal Bureau of Narcotics — which eventually merged with another agency to become the Bureau of Narcotics and Dangerous Drugs, the predecessor to the modern-day Drug Enforcement Administration. Then, in conjunction with newspaper magnate William Randolph Hearst, he successfully rebranded all cannabis into the Spanish word “marihuana,” to play off racism against Mexican people. This led to Congress proposing the Marihuana Tax Act of 1937, which began prohibition on all forms of cannabis.

Dr. William Woodard of the American Medical Association (AMA) testified against the Marihuana Tax Act, stating he was dismayed that the public had been misled through the use of the confusing term “marijuana” and that the AMA considered cannabis to be safe and medically effective for sedative, antispasmodic, and psychological use. Congress passed it anyway.

Years after that, the war on drugs had a long and devastating effect on black and Latinx communities. According to the Drug Policy Alliance, nearly 80% of people who are currently in federal prison for drug offenses are black or Latinx, despite the fact that white people use cannabis at the same rate.

The federal government is now considering legislation, the SAFE Banking Act and the STATES Act, that would allow banks and individual states to legally take cannabis money while the marijuana plant remains federally illegal. But we can’t just legalize what makes a small minority comfortable and wealthy. We have to legalize cannabis in a way that acknowledges the real human collateral the racist lies about cannabis have wrought. We must push for full legalization, because we must push for justice, equality, science, and the benefit of all humans.

This is why I have signed as a co-chief petitioner of the Oregon Legalization Justice Act of 2020. The ballot measure would redirect half of the recreational cannabis tax revenues toward subsidizing low-income patients and reinvesting in communities disproportionately affected by the war on drugs. Patients who use cannabis would no longer be kicked off organ donor transplant lists, and people who are diagnosed with qualifying chronic illnesses could be issued lifetime medical cannabis cards. Cannabis social cafes would be licensed and regulated as well.

I also strongly advocate that all Americans contact their legislators and ask them to sponsor and support the Marijuana Justice Act of 2019, the only piece of federal legislation that would decriminalize cannabis, remove it from the Controlled Substances Act, and pave the way for expungement of marijuana convictions and community redevelopment for those of us most marginalized.

I urge you, if you love CBD, you must stand up for truth, justice, and equality and advocate for the re-legalization of cannabis.