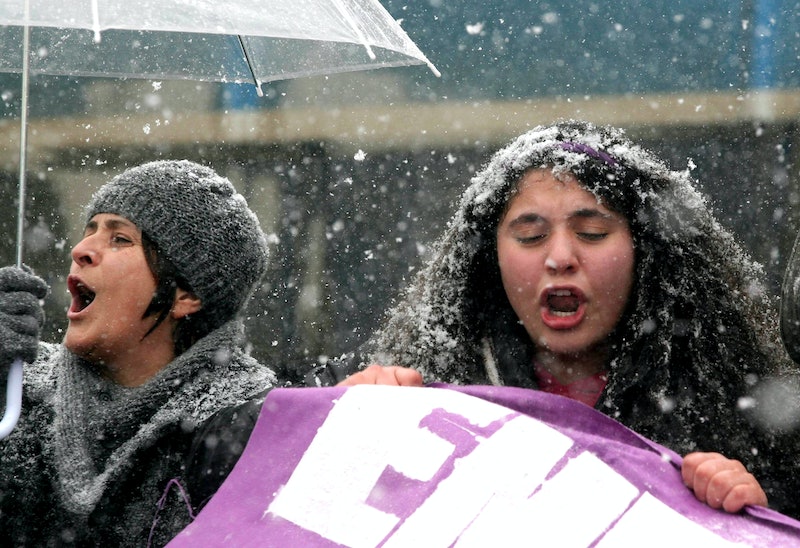 The Women's March on Washington, an event described by its organizers as a movement of solidarity and advocacy for women is happening on Jan. 21. If you're attending, you may be wondering how to best showcase your feelings about women's rights (also known as human rights). But there are plenty of great feminist quotes to put on your Women's March signs out there.

Even if you're not in Washington, D.C. for the march, you can still attend a sister march somewhere else. Sister marches are being held in all 50 states, as well as in many international locations. And if you can't make it out to one of those, you can still watch a live-stream of the D.C. event's rally, which features such speakers as Angela Davis, Cecile Richards of Planned Parenthood, Janet Mock, and more.

While the the march isn't being described as explicitly anti-President Donald Trump, the fact that it's taking place the day after his inauguration says a lot. When it was first being promoted, the Women's March was criticized for its lack of women of color as organizers, which led to the addition of a more diverse group of women to the march's leadership. The march also released a list of intersectional unity principles, which clarified that the march is pro-women and femme-identifying people, while acknowledging the unique challenges that people of color and other people from traditionally marginalized backgrounds face.

Here are a few quotes you might want to consider putting on your signs if you're out there this Saturday: