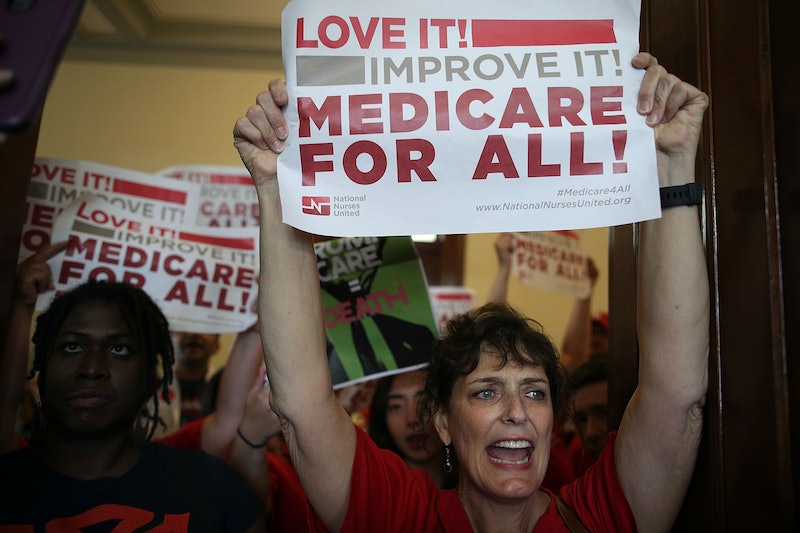 Following Trump's healthcare speech, in which he stated that Congress is getting closer to passing the repeal and replacement of Obamacare, concerns about the well-being of American citizens is at an all time high. Our health is officially at risk of being compromised by the administration. Though because the passing of the bill would require nearly 100 percent support from the Republican voters, those currently reliant on Obamacare still have a smidgen of hope. That hope is being channeled into healthcare rallies across the country this weekend, put together by the Women's March and Our Lives Are On The Line.

Regardless of whether or not you're personally enrolled with Obamacare, it's important to understand that millions of Americans lives are at stake if their affordable healthcare is jeopardized by Trumpcare — which will not offer the same or even comparable coverage to Obamacare. In fact, Trumpcare would end up pricing many people out of coverage altogether. To show support for your community and your fellow Americans, you might want to consider joining the efforts at a local rally and adding your voice to the collective. The more people who express their concerns to those representing their district, the better chance we have of stopping the bill from being passed.

If you'd like to join in, but don't know what to say, below are some suggestions for signs that you can make. You can be creative, or you can be direct, it doesn't matter how you say it, it just matters that you're there and you're supporting your country by opposing the bill.

Health Is A Human Right

Our most basic right, is the right to live. You can't argue that.

Healthcare is broken down into so many divisions, we can't leave any behind. Many will be priced out of mental health coverage if we don't kill the bill.

A Trifecta Of Perfect Signs

Maybe the most comprehensive medical diagram I've ever seen. So true!

Health care for all people living in America, new or old.

Health Care Is A Right

Get straight to the point. There's power in being direct.

Keep calling out the President until he has to answer for himself.

Bond with your community over your shared rights.

Should Really Be Called "Wealthcare"

So many lives are on the line.

Can't get more prophetic than the bible.