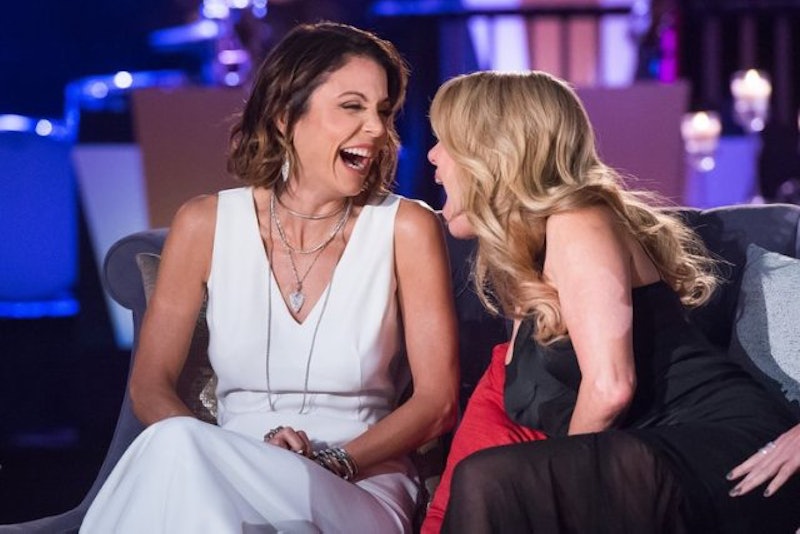 Bethenny Frankel and Ramona Singer have experienced many ups and downs throughout the years. The two OG's have had some intense fights on Real Housewives of New York City. As entertaining as that can be, they are much more fun to watch when they are on the same side. Bethenny Frankel and Ramona Singer should just be friends for many reasons. They have beefed over their differences in the past, but they really do have so much in common.

On the May 22 episode, Dorinda shared, "I realized how many similarities they have. It was fascinating." It truly was. Ramona and Bethenny bonded during the cast trip to upstate New York. They both endured a lot during their tough childhoods and now they are trying to use their difficult experiences to be the best women they can be.

Ramona explained it best when she said, "The thing is Bethenny and I have been through something very similar. The average person wouldn't understand what we went through. At all."

It was very touching seeing the two of them actually listen to each other for a change and ultimately comfort each other as they recalled some difficult incidents with their own parents.

Bethenny summed it up very well when she remarked, "Ramona and I [are] just trying not to make the same mistakes our mothers made.We are the product of our parents' unresolved issues and we get to be the mothers that we want to be."

Then, they clinked their glasses in honor of "breaking the chain" in that cycle as parents to their daughters.

Seeing the two of them bond in depth over some very personal experiences was very compelling. They even had some fun moments laughing together during the episode. It had me thinking. What would Real Housewives of New York City be like if Bethenny and Ramona just became friends? Imagine that world.

It may seem like a far-fetched idea given their past history, but there are actually so many reasons that this should just happen.

1. They Each Have 1 Daughter

Both Ramona and Bethenny are raising daughters in the reality TV spotlight. Being a mom can be a lot of work as it is, but being on RHONY is bound to add some unique complications. They can bond over this and even give each other some advice.

Bethenny runs her ever-expanding Skinnygirl empire. Ramona has her own skincare line. They should just come together and support each other's business endeavors.

3. They Can Celebrate Their Birthdays Together

The two Housewives blew out birthday candles together during the last episode. This begs a very obvious question: why haven't they had a double birthday party? Just imagine how epic that would be. Skinnygirl cocktails everywhere. They could be on turtle time all night long.

It makes sense for anyone to make peace with a coworker... in a conventional office setting. This is where things get a little tricky. As Housewives, Ramona and Bethenny do get paid when they argue. However, they still get those same salaries if they're getting along. As long they're not boring, they'll both stay on the show and we all know that they could never be boring. Even if they tried.

5. They Have Both Started Over In Life

Ramona and Bethenny's lives changed tremendously when they joined RHONY. They have become celebrities, launched businesses, experienced loss, and even went through divorce. No matter what happens these two don't skip a beat. Why can't they start anew by becoming friends?

6. They Have Experienced Public Divorce

Ramona and Mario Singer split after his admitted infidelity in 2014. Meanwhile, Bethenny and Jason Hoppy experienced the longest divorce process ever Or at least it seemed like it. They finalized their divorce in 2016 after a four year ordeal.

7. They Are Over The Cabaret

They both stayed home from the cabaret during the most recent episode and ragged on Luann de Lesseps for bragging about her show all season long. They can both stay home together while the other Housewives attend Countess & Friends.

A real friend tells it like it is. Ramona and Bethenny have never had a problem doing this. Ever.

When these two get along, they always have the best time. If only they were like this all the time!

10. They Have Heart To Hearts

Even with their drama throughout the years, they are there for each other when it matters most.

11. They Are OG Housewives

OG Housewives are a dying breed. These two should just stick together.

Ramona and Bethenny is the friendsip that the fans deserve. Usually it's boring when people get along on a reality TV show, but that's not the case with these two. We need Ramethenny/Bamona and we need it now!