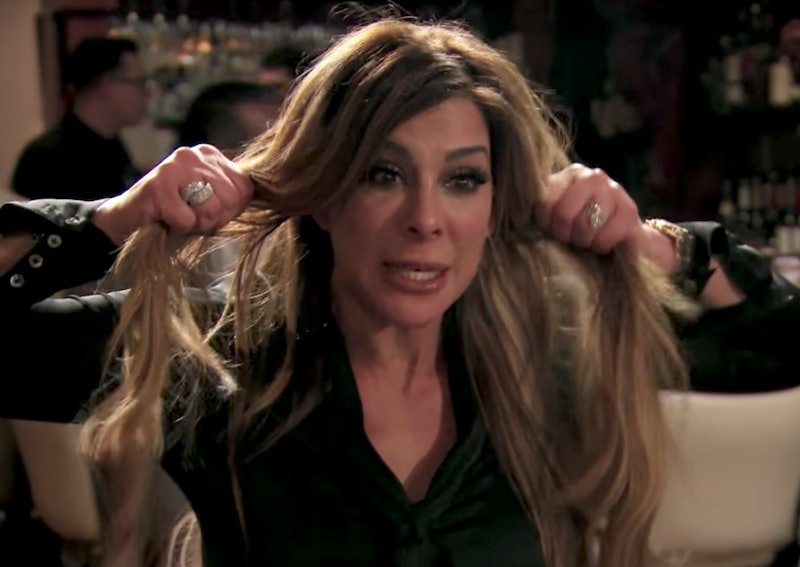 What hasn't happened on the Real Housewives of New Jersey? From prison to tables being flipped to fistfights to stripper allegations to hair being literally ripped out of someone's head, this Bravo series has truly brought it all. Now that the New Jersey-based reality show is finally back, it's time to discuss the storylines that need to happen on Real Housewives of New Jersey Season 8, because, believe it or not, there is still a lot fans haven't seen.

Now that Danielle Staub is back and Margaret Josephs has joined the season as a new Housewife there is brand new territory to explore — with some reflection on the past, as well, thanks to Danielle's history. This is definitely going to be a different season compared to at least the past two, which weren't quite as exciting as they could have been. Thankfully, not only are there two RHONJ OGs this time around, but each Housewife brings her own unique traits.

Based on that and what viewers have already seen so far with all of the cake drama, keep those fingers crossed that at least one of the following potential storylines happen at some point this season.

In the Season 8 premiere, Teresa Giudice got more candid than ever about her frustrations with her husband, Joe Giudice, and the situation that led to her 15-month prison sentence (she served 11 months, in the end) and his 41-month prison sentence, which he is currently serving for fraud. While chatting with the ladies, she revealed what really put her over the edge was the death of her mother, because the 11 months she was locked up was time she could've spent with her mom.

Teresa rarely ever speaks badly of Joe and has always stood by his side. That's not to say she still doesn't, but to hear her finally open up by expressing anger towards her husband, it's refreshing. Here's hoping even more Teresa realness is served throughout the remainder of Season 8.

It's been seven years since Danielle has appeared on RHONJ, so now that she is officially back, there needs to be some type of refresher on her life. What has she been up to since fans last saw her at the Season 2 reunion, where she awkwardly hugged former Housewife Jacqueline Laurita?

Maybe the series needs to dedicate an entire episode to a Danielle recap, because a brief refresher of her life isn't going to cut it. Everyone needs to learn about her boyfriend, Marty, and hear all about her daughters, Christine and Jillian, who, mind you, are now 23 and 19, respectively.

3. Siggy Moving Her Son Into College

It's no secret that Siggy Flicker is obsessed with her children. As revealed in the Season 8 premiere, her eldest, Joshua Flicker, is deciding where to attend college. Well, Siggy, made her mind up that Josh would end up at Penn State University. She even bought a bunch of Penn State gear, because she couldn't help herself. Guess what? Josh now attends Penn State, so Siggy's dream came true. Now, all fans need is to see Siggy taking her son to college and all of the shenanigans that probably ensued.

In the premiere, not only did Dolores Catania's ex-husband, Frank Catania, move back into her house (it's purely platonic), but she also announced that she has a new man in her life, a doctor, who delivers babies. She didn't reveal his name in the episode, but while chatting with Bravo's The Daily Dish, she revealed she is dating Dr. David Principe and that the two were introduced by Siggy.

"He's a perinatologist, which is a doctor that helps women deliver high risk pregnancies," Dolores said. "He's very good. His first love is his job and that's a lot to handle because this is a man that works seven days a week. He's on call constantly. Yet I'm very attracted to this man. I have a good time with him when I see him at 10 o'clock at night and I wait in front of his house for him to get home."

There has been much coverage of Dolores' life at home with her kids, her pets and her ex-husband, but not of her love life. Now that she's put it out there that she is dating, it's time for her romance with David to move front and center.

5. The Dissolution Of Kim D.

How much is too much Kim D? After seven seasons, now is the time for Kim D. to go on her merry way. Look, there's no doubt she keeps things interesting and knows how to serve up all kinds of drama. That said, the ongoing feud between Kim. D, Melissa Gorga, Teresa, Danielle is tired. As showcased in the Season 8 trailer and as seen in the premiere, Kim D. is very much alive and kicking this season. She's bringing her A-game, but let's keep those fingers crossed this is the last viewers will see from her.

6. The Adventures Of Marge Sr.

There's no denying that Margaret is a great fit on RHONJ. Upon being introduced to her in the premiere, fans also got a brief glimpse of her mother, Marge Sr. — and it wasn't enough. As Marge Sr., who also works for Margaret, said to her daughter, "You know that guy I went out with? He called today." Unfortunately, she didn't elaborate, but it would be wonderful to see her mother, who seems like a great time, out on a date.

Margaret even dished to NJ Advance Media about her mother, "She is hilarious, she is Zsa Zsa Gabor, the woman teetering in high heels. She's like a cartoon character." The more Marge Sr., the better.

Don't try to pretend that you're not hoping for some type of reunion with Danielle, Jacqueline Laurita, and Dina Manzo. Yes, neither Jacqueline nor Dina are part of RHONJ any longer, but that doesn't mean they can't return. They don't even need to make a full-time comeback, just a guest appearance. To see this trio back in the same room again (like in Seasons 1 and 2) would be a dream come true — and possibly also a disaster.

Since the beginning of RHONJ, the women have debated the idea of gender roles. Many of them have discussed how they're husbands are "traditional" and would generally prefer they take their Housewives title to heart — aka stay home, take care of the kids, cook, clean, etc. The same conversation came up in this season's premiere. To hear Siggy say that her husband told (not asked, told) her she needed to work less, well, it's frustrating to hear. Margaret tried to explain that husbands should support their wives and what makes them happy, including having careers, if they so choose. The newbie's point of view is extremely welcomed. Here's hoping more conversations about gender roles come up — and Margaret is there to make sense of it all.

9. The Return of Caroline Manzo

This will probably never, ever happen, but, a RHONJ fan can dream. To have Caroline show up now that Danielle is back, well, it'd be pure gold. As you'll most likely recall, they didn't get along.

In October 2013, Caroline explained her departure via a blog for Bravo. "Over the past few years my outlook on the show has changed from something I couldn't wait to show my future grandchildren to something I hope my future grandchildren never see," she wrote. "I've always prided myself on being a good example for my children and my decision to leave is based on advice I've always given them: 'Be true to yourself and be proud of who you are, you are born with a name and you die with a name, don't dirty it up.'"

So, yeah, she probably won't ever return, but it doesn't hurt to imagine the scenario.

Season after season Joe Gorga has made his feelings about the roles of men and women extremely clear. It's something he also teaches his children. Plus, he also takes his "protective fatherly duties" to the extreme. There's no doubt that he loves his children immensely, but when he tells his daughter, Antonia, and Teresa's daughters (his nieces) that they aren't allowed to date, they should stay away from boys, and that Antonia will be allowed to date when she's 48, it's beyond irritating. That same episode, he also told his one son that he's allowed to hang out with whomever he wants, no matter their gender. There really needs to be more focus on his "traditional" ways — and why they're wrong.

So far, there is a major divide within the RHONJ cast. There is Team Siggy and Dolores and then there is everyone else. What caused the massive division is a cake. Yes, a cake. In the premiere, Siggy bought Melissa a beautiful cake for her birthday, which Melissa and Teresa ended up destroying. Siggy found it disrespectful and "trashy," whereas Melissa and Teresa thought it was funny. It's unfortunate that Siggy, Dolores, Melissa, and Teresa aren't getting along, because they were all once super close. This is the way it needs to be again, so here's hoping by the end of the season they find their way back to one another — and celebrate without cake.

Who else agrees that RHONJ Season 8 is already fantastic? (It's definitely better than RHOC Season 12...) And with these storylines included, it could be even better.