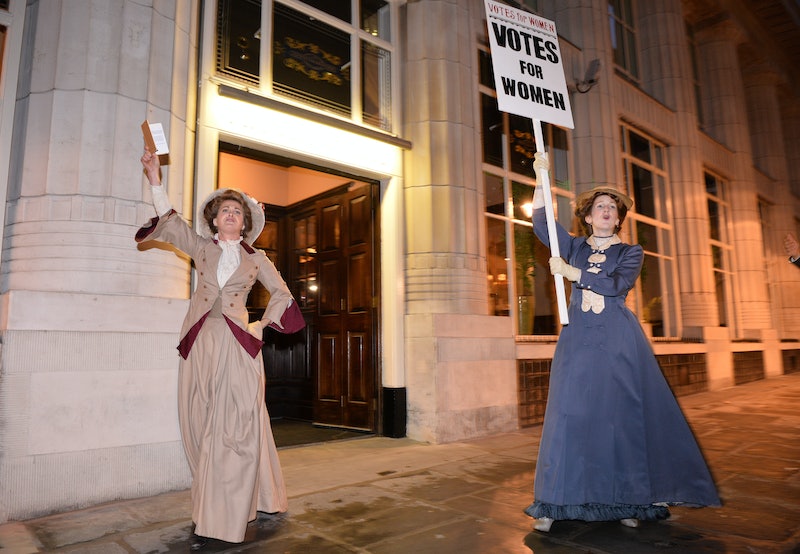 Saturday's Women's March on Washington won't be the first of its kind to make history in a big way. The fight for women's rights dates back hundreds of years, providing feminists with countless role models from nearly every decade. If you want to channel the original women suffragists' words in your Women's March sign, you have some stellar options to choose from.

Prior to Woodrow Wilson's presidential inauguration in 1913, thousands of women crowded the streets in the nation's capital to march for women's suffrage. According to Smithsonian.com, though a total of 5,000 women marched the streets of Washington, up to 500,000 people flocked to watch. It wasn't until nearly seven years later that the 19th Amendment was ratified, officially guaranteeing women from every state the right to vote. Today, women still have a long fight ahead of them.

Now, over 100 years later, Saturday's Women's March is advocating for an array of causes that fit under an umbrella of inclusivity and feminism. According to the march's Unity Principles, they include promoting peace, reproductive rights, LGBTQIA rights, workers' rights, civil rights, disability rights, immigrant rights, and environmental justice. And it's hard to think of a better source of inspiration than the women who first took on Washington D.C. to demand their rights. Here are some Women's March sign ideas that channel the first women's suffragists:

I believe that the influence of woman will save the country before every other power.

2. Lucy Stone On Being Fearless

Now all we need is to continue to speak the truth fearlessly ...

It was we, the people; not we, the white male citizens ...

4. Susan B. Anthony On Disruption

Organize, agitate, educate, must be our war cry.

Come, come, my conservative friend, wipe the dew off your spectacles, and see that the world is moving.

The best protection any woman can have... is courage.

7. Alice Paul On The World Order

There will never be a new world order until women are a part of it.

We women of America tell you that America is not a democracy.

I am glad to see that men are getting their rights, but I want women to get theirs, and while the water is stirring, I will step into the pool.

Pray to God. She will help you.

Any great change must expect opposition, because it shakes the very foundation of privilege.

The energy created when women mobilize is powerful and can't be ignored. In the case of the Women's March on Washington, both women and men will be demanding a variety of rights, thanks in part to what the nation's original suffragists accomplished decades ago and continue to inspire.