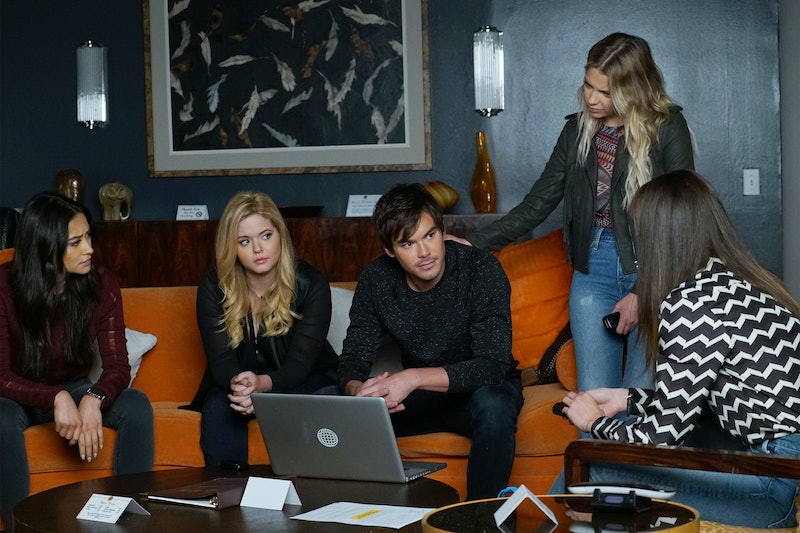 The end of Pretty Little Liars is fast approaching, and it's hard to believe that the series is almost done for good. Over seven seasons, PLL has kept the audience guessing by throwing out so many curve balls that it's genuinely impossible to predict what will happen next. With only a few episodes left, it seems as though there are mysteries that will never be fully unraveled, and plenty of characters who will remain shady for no reason. But what are some of the things fans need from the final episodes of Pretty Little Liars? Viewers simply cannot wait any longer — I. Marlene King has to provide some answers.

From Ezra's sketchy beginnings as Aria's teacher, to that time Hanna's mom stole money to keep them financially afloat, there are lots of unanswered questions in the history of Pretty Little Liars. With so little time left, fans are undoubtedly going to have to give up on ever finding out who Beach Hottie is, but what answers do we all absolutely, positively need before the series says goodbye forever? For instance, the questions plaguing my brain include: Is Charlotte really dead? Is Aria evil? Will Paige be back? Has Alison been A.D. all along? So. Many. Questions.

The show needs an Ezria wedding. These two have been through too much to not get their happy ending. Plus, the couple that writes together, stays together.

2. To Find Out What Wren's Deal Is

It's long been speculated that Wren is a shady character. When he turned up with Spencer at the airport this season, it felt as though he might play a big role in the finale. Is Wren A.D. or just an innocent bystander?

3. To Know Whether Spencer Has A Twin

Since it was revealed that Spencer's birth mother is Mary Drake, speculation that Spencer is a twin has amped up. Plus, the theory about Spencer's bangs is solid, suggesting that we've seen the twin onscreen already. But we need to know for sure.

They've had a tumultuous relationship, that's for sure. But Alison finally seems to have embraced her love for Emily, and they are on track to becoming the cutest couple on PLL. They need a happy ending.

The Haleb fans have spoken.

6. Some Healing For Toby

Toby's storyline in Season 7B has been horrific. His wife, Yvonne, died moments after they'd exchanged vows, and since then, he's all but disappeared. Toby needs some looking after, and fans need assurance that he's OK.

7. An Answer To Whether Charlotte Is Still Alive

On PLL, no one is ever really dead. Is it possible that Charlotte is still pulling the strings?

8. To Find Out If Lucas Is A Creep

One of the biggest questions I've had from the start is, is Lucas a creep? Or is he just a nice guy who genuinely likes Hanna? He knew Charlotte at summer camp as a kid, so he may somehow connected to the A team.

9. Confirmation Of Which Side Mona Is Really On

Mona has been A, and she's also been the gang's best ally. But as the series draws to a close, which side is she really on?

10. A Comeuppance For Peter Hastings

Seriously, this man had an affair with Jessica DiLaurentis that resulted in the birth of Jason, and he also slept with Jessica's twin, Mary Drake, resulting in the birth of Spencer. Plus, the theory that Spencer might have a twin makes Peter all the more shady. Veronica Hastings deserves much more.

11. An Answer For Why A.D. Has Tormented Us All For So Long

An obvious one, but PLL cannot end without revealing, once and for all, why A.D. has tormented the Liars and the audience for all this time. The show can't end on a cliffhanger.

There are so many questions currently unanswered on PLL, and so little time left to answer them. Fingers crossed that the cast and crew give fans everything they need to help come to terms with the end of the best show of all time.

More like this
'Stranger Things' Finn Wolfhard Is “Proud” Of Noah Schnapp For Coming Out
By Sophie McEvoy
Pedro Pascal Barely Got Through The "Lisa From Temecula" 'SNL' Sketch
By Stephanie Topacio Long
Melanie Lynskey Plays A “Ruthless Leader” In 'The Last Of Us'
By Brad Witter
The Plane Crash In 'Dear Edward' Is Based On A 2010 Tragedy
By Grace Wehniainen
Get Even More From Bustle — Sign Up For The Newsletter
From hair trends to relationship advice, our daily newsletter has everything you need to sound like a person who’s on TikTok, even if you aren’t.