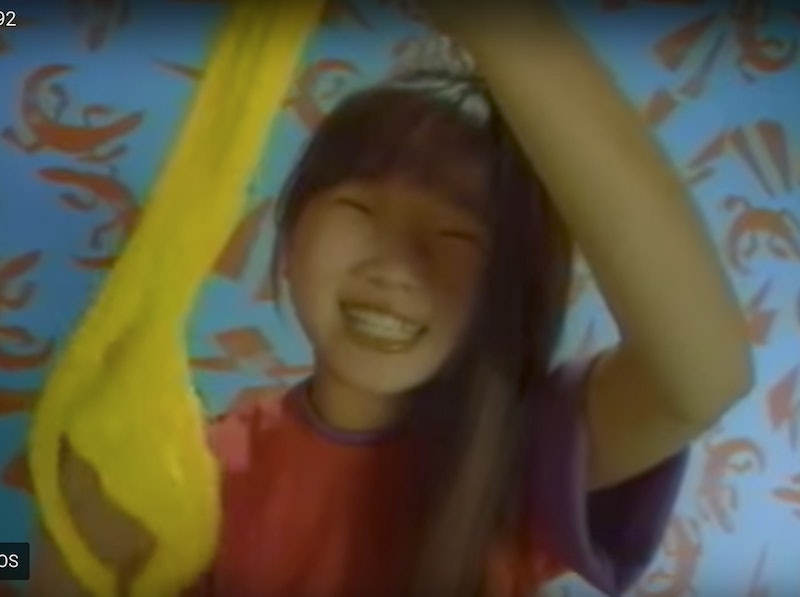 One thing that social media has done in the last few years is make bizarre trends more visible. Things suddenly go viral, flaring up everywhere and disappearing just as quickly. It’s easy to forget that we were obsessed with plenty of ‘90s trends that were as weird as fidget spinners, slime, apps that can turn you into an anime character, unicorn beverages, and all the other things that inexplicably manage to take the world by storm. Instagram and Twitter may have made strange obsessions more evident, but humans have been weirdos for a long, long time.

When I recently heard of slime for the first time (yes, I’m behind the times), my first thought was, “What the hell is slime? This is so stupid.” And then I promptly spent the next 30 minutes watching Instagram videos of people squeezing, stretching, and popping glittery, foamy, bead-filled goo. So I guess some part of me — the part that could literally not look away — gets why slime-themed Instagram accounts are getting hundreds of thousands of followers. But this is far from the first time that people have been obsessed with unlikely things — certainly the ‘90s (and every other decade) had their own weird flash-in-the-pan hobbies that make slime and fidget spinners seem fairly norma lby comparison. These were just a few of them:

Seriously, what is slime but a fancy, newer version of Gak? First released by Nickelodeon in 1992, Gak was a lot like Silly Putty, but generally gooier and stickier.

Silly Putty isn’t a ‘90s thing — it was invented in the 1940s — but it was still a staple among ‘90s toys. It wasn’t as trendy as Gak, but kids still adored the stretchy stuff (as well as the trademark Silly Putty eggs).

Rounding out our discussion of weird, gooey substances of the ‘90s is Floam, a Nickelodeon–produced toy that existed somewhere on the spectrum between clay and foam. Filled with microbeads, Floam had a fun texture and, unlike Gak, would stay in whatever shape you put it into, so you could use it as a building material.

Slap bracelets had it all: They were sweet jewelry and a fun activity built into one. When you were bored in class, there was nothing quite as satisfying as slapping that bracelet on, over and over (and over and over). When they were banned from my elementary school (because, apparently, knock-off versions could rust and cut through the skin), I was heartbroken. HEARTBROKEN, I tell you.

Pokémon cards were so popular in the ‘90s that adults were actually worried that kids’ obsession with them would spark a "crime wave." Yes, really. According to Business Insider, an 11-year-old in Arizona was arrested for armed robbery after threatening other kids with a knife in order to get their cards. And someone filed a lawsuit against Nintendo in 1999 because, the suit claimed, the card game was a form of gambling.

My sister got a Creepy Crawlers oven for her birthday one year, and I was so, so jealous. It was essentially an Easy Bake Oven that you’d use to bake up stretchy, plasticky little bugs. You could then hide them all over the house to freak out your siblings.

TBH, I didn’t really get the Pogs phenomenon back in the day, but my little sister was into them. Her collection of a few dozen Pogs was nothing compared to what a lot of kids had — hundreds upon hundreds of cardboard caps, all gathered for the purpose of winning… more cardboard caps.

Isn’t Skip-It — aka the Greatest Toy Of The 90s — sort of like a giant fidget spinner? It goes around and around and around… and you get lots of exercise in the process. What’s not to love?

Sky Dancers were magical fairies that could fly. You’d put the doll in the toy base, pull a string, and the doll’s arms/wings* would whip out and start circling like a helicopter. Sky Dancers were recalled in 2000 after six years on the market. The reason? Apparently flying plastic toys aren’t very safe after all. According to the U.S. Consumer Product Safety Commission, toy company Galoob received reports of 150 injuries caused by the flying dolls, including “eye injuries, including scratched corneas and incidents of temporary blindness, broken teeth, a mild concussion, a broken rib, and facial lacerations that required stitches.” Temporary blindness? BROKEN TEETH? Who knew sparkly, plastic fairies could be so bloodthirsty?

* Even as a child, I marveled at how annoying it would be to have your arms strapped to your wings. How would you drive? Or write? Or hold a cup of coffee?

Beanie Babies might not be mesmerizing in the same way that slime and fidget spinners are, but, if we’re talking about sheer trendiness — and the power of one random object to take the nation by storm — nothing beats these little under-stuffed critters. Looking back, it’s incredibly strange to think that people invested small fortunes in rare Beanie Babies, convinced that these baggy little toys would somehow become more and more valuable over time. These days, most ‘90s Beanies sell for only a few dollars on eBay.

In terms of pure WTF-ness, the Furby wins, hands down. These talking, furry, electronic alien robot toys were incredibly popular in the late ‘90s. They were also super creepy (to me, at least).

More like this
A New 'And Just Like That' Table Read Pic Confirms A Key Character's Return
By Jack Irvin and Grace Wehniainen
Netflix Reveals First Look At Wednesday In The 'Addams Family' Spinoff Series
By Bustle Editors
Kenan & Kel Just Reunited At The 2022 Emmys & Twitter Is Overjoyed
By Grace Wehniainen
15 Offensive AF Jokes In 'Friends' That Really Aren't OK
By Tolly Wright, Bustle Editors and Meguire Hennes
Get Even More From Bustle — Sign Up For The Newsletter