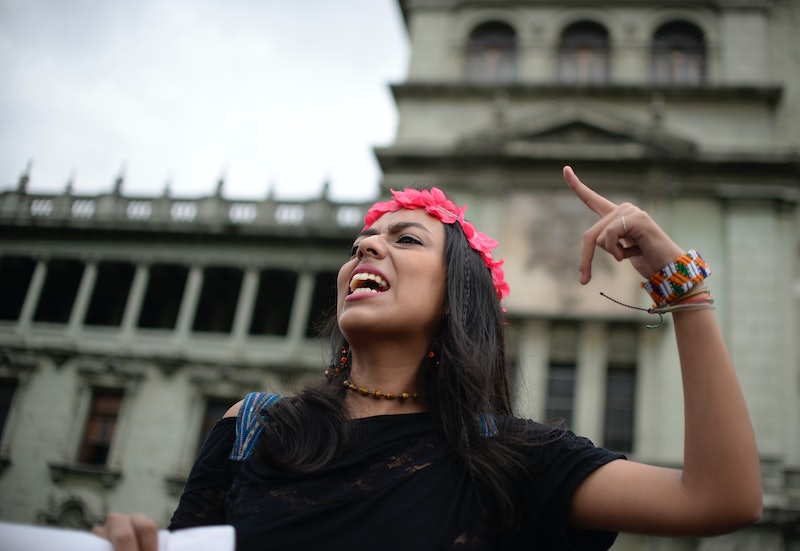 Now that Donald Trump has been inaugurated as our 45th (male) president, many Americans are already starting to panic. It's standard practice for presidential candidates to promise to accomplish certain things in their first 100 days, but the measures promised in the first 100 days of Trump's presidency would be more drastic than usual. Trump's inaugural address echoed this extremism, although it was light on actual policy, promising:

Every decision on trade, on taxes, on immigration, on foreign affairs, will be made to benefit American workers and American families. We must protect our borders from the ravages of other countries making our products, stealing our companies, and destroying our jobs. Protection will lead to great prosperity and strength.

In previous speeches, Trump has promised to be an extremely protectionist president, announcing plans to withdraw from NAFTA and the TPP and label China a currency manipulator.

The new White House website seems to indicate some of these changing priorities: it has already been scrubbed of references to climate change, healthcare, and LGBT rights. Even as Trump's many Cabinet nominees have yet to face confirmation —and as some of those nominees' path to confirmation is far from guaranteed — his administration will begin its work on Friday.

From Trump's pledge to defund women's healthcare to a mortgage rate cut that's already taken place, these are 11 of the many things that Americans will face in the first months of President Trump.

Republicans in Congress and in the White House alike have promised to repeal the Affordable Care Act, an imperfect piece of legislation that nonetheless provided health insurance for over 20 million Americans. They have promised a replacement plan but no such plan has been forthcoming.

Trump's nominee for Attorney General, Jeff Sessions, was once rejected for a federal judgeship due to comments he had made about race. Sessions has said that he believes the Voting Rights Act is a "piece of intrusive legislation," and is extremely unlikely to take action against any of the various bills across the country that disproportionately affect black Americans' ability to get to the polls.

The Trump Administration May Not Protect LGBT Rights

While the Supreme Court decision legalizing gay marriage cannot be overturned quickly and may not be overturned at all, many LGBT Americans are frightened by the Trump administration's (at best) indifference to gay rights. The LGBT rights webpage has already been scrubbed from the White House website; leaving millions of LGBT Americans unsure about the future. In the past, the White House has prevented federal contractors from discriminating against LGBT employees; those protections are likely to vanish under President Trump.

An End to Net Neutrality

Net neutrality is complicated, but basically it ensures that internet service providers cannot favor, upcharge, or block certain websites. This means that an individual startup blog can be accessed at the same speed as, say, the New York Times. Net neutrality has been lauded as key to freedom of speech; an end to net neutrality would also mean that your Netflix habit could get a lot more expensive. Trump's reported pick to lead the FCC, Ajit Pai, is a noted foe of net neutrality.

A Cracked, But Whole, Glass Ceiling

Despite being, arguably, the most qualified person ever to run for the presidency — and despite winning the popular vote by nearly three million votes — Secretary of State Hillary Clinton was unable to win the White House. The lingering pain of seeing a qualified woman lose to an unqualified man, on the most public of stages, will be a thorn in the side of many American women and allies for the next four years, and possibly for a whole lot longer.

All references to climate change were removed from Trump's White House site shortly after the inauguration, replaced instead with promises to increase fossil fuel production in the United States in order to increase jobs. (The administration, for the record, did not explain how it intends to indefinitely increase an industry surrounding a finite resource.)

The president, who unfortunately thinks climate change is a hoax perpetuated by the Chinese, is therefore extremely unlikely to do anything about it. Despite his inaction, 2016 was a year of record-breaking heat, and extreme weather events are already becoming far more likely.

Conversion therapy refers to an abusive practice in which LGBT people, often adolescents, are submitted to procedures like aversion therapy and shocks in order to "turn them straight." Vice President Mike Pence once tried to get Congress to redirect funding for AIDS research to groups "seeking to change their sexual behavior," which many interpreted as conversion therapy, though Pence has denied that is what he was referring to. Similarly, a line in the 2016 GOP platform about supporting the rights of parents to "determine the proper medical treatment and therapy for their minor children," smacked of conversion therapy to many.

Thin-Skinned Fingers on the Nuclear Button

Now that we have, at once, a president with no foreign policy experience whatsoever, and a president who is infamously easily offended, Americans would be right to be concerned about whether Trump's thin skin could result in an extreme, even nuclear, overreaction. He's also said he thinks more countries should have nuclear weapons and was apparently baffled by the reasons America hasn't used their weapons more frequently.

If Planned Parenthood is Defunded, People Will Die

Seeing as how federal dollars do not go to fund abortion, the Trump administration's promise to defund Planned Parenthood will affect only the other services offered by that organization, like cancer screenings and contraception. If the hundreds of thousands of women who rely on Planned Parenthood's services are denied federal funding, they will lose their access to cancer screenings, not to abortion.

The Revolting Political Legacy of "Grab 'Em By the P*ssy"

After a disgusting tape surfaced that showed Donald Trump making crass comments about sexually assaulting women, Republicans were quick to jump ship, often in self-congratulatory public statements that mentioned their daughters. Now that many of those Republicans got back on board and elected Trump, we should be worried less about our daughters and more about our sons. What do children learn from watching a country elect a man who fundamentally does not treat women as equals?

If you're feeling overwhelmed about the things that may change quickly, don't hesitate to get involved. You can call your representatives about Cabinet nominees like Jeff Sessions or Secretary of Education nominee Betsy DeVos, donate to Planned Parenthood, join an inauguration protest in your hometown, and more. It's going to be a long four years, but Bustle will continue to provide our readers with ways to get involved and stand up for feminist ideals throughout Trump's presidency.