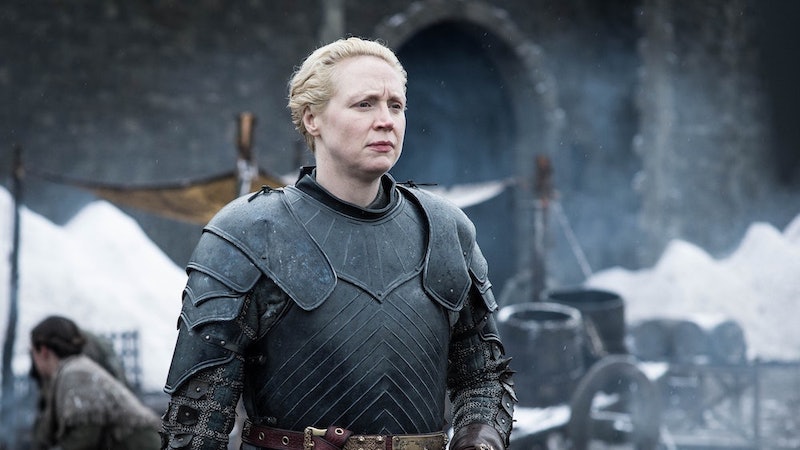 Spoilers ahead for the last episode of Game of Thrones. After eight seasons, Game of Thrones has come to a veritable end on Sunday, May 19 with Bran Stark crowned as the new King of Westeros. In the final moments of the HBO fantasy drama, fans witnessed newly-appointed Lord Commander of the Kingsguard Ser Brienne of Tarth pay tribute to her perished beau Jaime Lannister in the Book of Brothers. Jaime met his deadly fate at King’s Landing when Daenerys Targaryen burned the Westeros capital to the ground — a stunning upset that left fans reeling. In the finale, Brienne turned to Jaime's long empty page in the Book of Brothers and used a feather quill to fill in all of the good deeds he never thought he would accomplish — documenting Jaime’s bravery and achievements in the aftermath of his death while her eyes filled with tears. In the process, Brienne also launched a thousand memes.

"Captured in the field at the Whispering Wood. Set free by Lady Catelyn Stark in return for an oath to find and return her two daughters. Took Rivverrun from the Tully rebels, without loss of life. Lured the Unsullied into attacking Casterly Rock, sacrificing his childhood home in service to a greater strategy. Outwitted the Targaryen forces to seize Highgarden. Fought at the Battle of the Goldroad bravely, narrowly escaping death by dragonfire. Pledged himself to the forces of men and rode north to join them at Winterfell, alone. Faced the Army of the Dead and defended the castle against impossible odds until the defeat of the Night King. Escaped imprisonment and rode south in an attempt to save the capital from destruction."

She concluded with a bittersweet, "Died protecting his Queen."

It was a heartfelt ending that paid homage to Brienne and Jaime’s relationship, which progressed from enemies to more in the span of several seasons. But, because it’s Game of Thrones — a series that has been on the receiving end of hilarious meme treatments galore for its eight-season run — fans of the fantasy epic had their own homages in mind. From pop culture references that range from the Burn Book in Mean Girls to Lara Jean Covey’s letters in To All the Boys I’ve Loved Before, below are all the best memes that came from "The Iron Throne," the series finale of Game of Thrones.

This To All the Boys I've Loved Before Reference From Author Jenny Han Herself.

This Sex and the City Reference That Is So Carrie Bradshaw.

This Nostalgic Callback To The "S" You Sketched In Your Lisa Frank Notebooks.

This Smash Mouth Song That Will Remind You Of The Shrek Franchise.

This Callback To Fairytales.

This Jane The Virgin Crossover Episode.

This Tweet That's Spilling All The Tea In Westeros.

This Reference From The Snowman That Takes On A Whole New Meaning.

This Tweet That Combines Two Memes — Causing The Ultimate Memeception.

This Good Will Hunting Crossover.

The greatest upset of Game of Thrones' conclusion? The lack of new GoT-themed memes to cackle over on Monday mornings.

More like this
This Episode 6 Moment Foreshadows Viserys' Fate On 'House Of The Dragon'
By Grace Wehniainen
You’ll Definitely Recognise Both Of Ty Tennant’s Parents
By Maxine Harrison
'House Of The Dragon’s Theo Nate Is A “Massive” 'GoT' Fan
By Maxine Harrison
Nicola Coughlan Shared A Lady Whistledown Excerpt From ‘Bridgerton’ Season 3
By Grace Wehniainen, Alyssa Lapid and Sam Ramsden
Get Even More From Bustle — Sign Up For The Newsletter