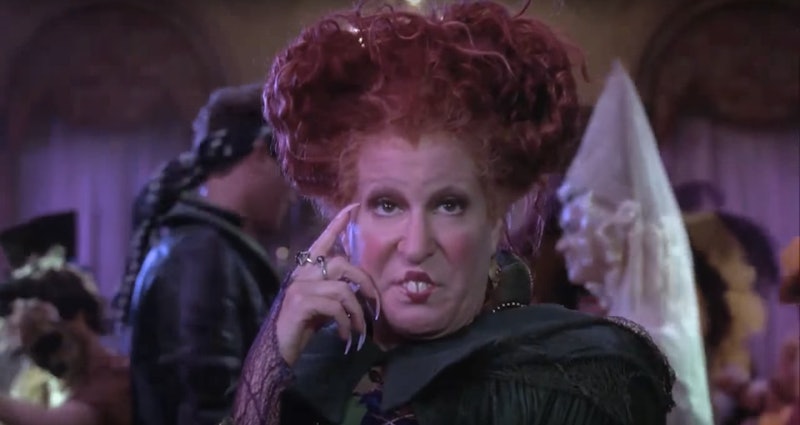 Fall is an interesting time of year, pumpkin spiced lattes show up on Starbucks menus and stores start setting out Halloween supplies and decorations. It's also time when there's one movie that practically everyone watches — Hocus Pocus. The film is a beloved cult-classic, but you probably didn't realize that most of the Hocus Pocus actors also show up other popular movies as well. Some of their roles are blink-and-you-miss-it cameos, or small, uncredited appearances, but some of the actors just had roles you might have forgotten about.

First released in 1993, Hocus Pocus wasn't really a huge hit at the box office, and it wasn't necessarily critically acclaimed. It was even referred to by a writer for the New York Times as an "unholy mess" when it first came out. However it's become a classic over the past 20, going on 25 years, and is widely considered a Halloween favorite. One that regularly airs on multiple different television networks in the months of September and October, and although it sadly isn't available to steam for free on any of the major providers, it can be rented for a couple of dollars on YouTube and Amazon.

But before you start rewatching Hocus Pocus, here are the surprising roles that a dozen of the actors had in other hit films.

Birch, who was only eleven when Hocus Pocus was released, played the adorable little Dani. She also had a lead role as Jane Burnham in American Beauty just a few years later.

3. Bette Midler In What Women Want

She wasn't credited for her role as Dr. J.M. Perkins in What Women Want, but Midler (who played the iconic Winifred Sanderson in Hocus Pocus) but her scene alongside Mel Gibson was — as Dr. Perkins would say — fabulous.

After playing Allison in Hocus Pocus, Shaw went on to share the screen with Tom Cruise and Nicole Kidman in Eyes Wide Shut.

5. Larry Bagby In Walk the Line

In the award-winning film Walk the Line, Bagby portrayed Marshall Garnett Grant, who was the bassist of Johnny Cash's original backing duo, the Tennessee Two. Don't recognize him from the film? Well, he certainly looked a lot different when he played Ernie, aka "Ice," in Hocus Pocus as a teenager.

Although a significant portion of the beginning of WALL-E doesn't feature any human voices, there were a number of human characters in the second half of the movie. That includes Mary, who was voiced by Najimy.

Known for playing the Madonna-loving mother Jenny in Hocus Pocus, Faracy has also had roles in hilarious movies like Bad Teacher and Mike and Dave Need Wedding Dates.

Crazy to imagine Billy Butcherson acting alongside the likes of Meryl Streep and Tilda Swinton, but indeed — Jones, who played Billy in Hocus Pocus, was in the 2002 hit movie Adaptation. He's also known by comic fans for his roles in Hellboy and Hellboy II: The Golden Army.

He was uncredited for his role as the Devil in Hocus Pocus, but Marshall (who's been a writer, director, and producer on hit films like The Princess Diaries and Beaches) also made a cameos in a number of movies he worked on, like Pretty Woman and Runaway Bride.

Like her older brother, Penny Marshall (who played the Master's Wife) has had small roles in films like Mother's Day and New Years Eve. Oh yeah, and she's directed and produced iconic films like A League of Their Own and Riding in Cars with Boys.

12. Jason Marsden In A Goofy Movie

He had guest roles on a couple of iconic shows like Boy Meets World and Full House back in the day, and in addition to providing the voice of Thackery Binx in Hocus Pocus, Jason Marsden was also the voice of Max in A Goofy Movie.

Next time you go to watch any of the films on this list make sure to be on the lookout for the corresponding character, who you'll probably never look at again after realizing that person was also in Hocus Pocus.

More like this
20 Photos Of The 'Hocus Pocus' Cast Then & Now
By Radhika Menon
After 'Hocus Pocus 2', The Sanderson Sisters Are Coming to Broadway
By Radhika Menon
12 ’90s Movie References You Missed In 'Do Revenge'
By Radhika Menon
Margot Robbie Breaks Her Silence On *That* Viral 'Barbie' Moment
By Maxine Harrison
Get Even More From Bustle — Sign Up For The Newsletter