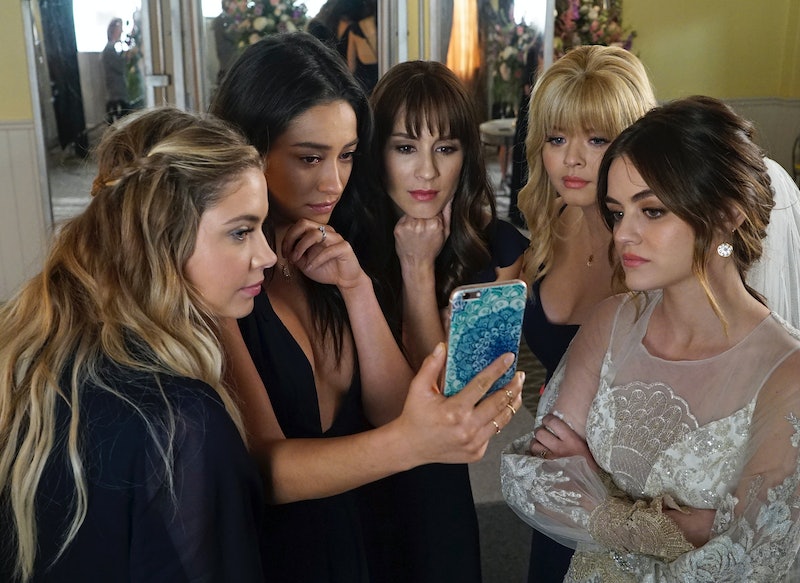 As Pretty Little Liars comes to an end once and for all, it's only natural to look back at fan theories from over the years. While the identity of A.D. has been narrowed down since Charlotte's death, it's important to remember there was a simpler time when no one even realized that Alison was still alive. Since Alison is most definitely alive and pregnant, the show has taken on a totally different tone, and theories about the end of Pretty Little Liars have changed as a result. So, which seemingly impossible PLL theories have been eliminated in recent months?

Almost every character has been a suspect at some point during the show's seven seasons. While the five main female characters are usually a tight-knit unit, it's totally possible that one of them has been A.D. this entire time. That said, several theories involving the Liars have been proven wrong already. Hardcore fans will be able to remember back to when Toby seemed like the ultimate bad guy. Others will wonder where Lucas disappeared to for so long.

But mostly, it's worth remembering, that while these fan theories are (most likely) wrong, some other theories have been absolutely right. Fans shouldn't be underestimated.

Before it was revealed that Charles was Charlotte, aka CeCe, the world speculated that Charles was any number of inhabitants of Rosewood, and that the DiLaurentis sibling had been controlling the puppet strings all along. But given the fact that Mona killed Charlotte, this theory is kaput.

Before her death, Alison's mom was incredibly shady. She was a big A.D. contender at one point, and it even looked as though she was responsible for Alison's murder. However, it doesn't look like Jessica will have anything to do with the end of Pretty Little Liars after all. Since, you know, she's dead.

Mona may have killed Charlotte, but in the penultimate episode of Season 7, it seemed as though she was breaking from reality. Having spent some time in Radley Sanitarium, Mona's mental wellbeing has always been in question, and it seems unlikely at this point that she's orchestrating everything.

Everyone thought Andrew was involved in the mystery in a big way. As it turned out, he was merely one of A.D.'s puppets. Disappointing.

Series Creator I. Marlene King told TVLine that Jason DiLaurentis won't be in the finale. According to King, this is because the actor was unavailable. Of course, this could be a double bluff, but taking her words at face value, if Jason isn't in the finale, then he can't be A.D.

6. The Flash Forward In Season 6B Means Something

At the end of Season 6A, Episode 10, the show jumps ahead to five years later. The Liars run into a classroom that Alison is about to teach a lesson in. She's written her name as Mrs. Rollins on the board. They urge her to get going, but Spencer arrives and says, "It's too late, he's already here." Fans have waited a long time to find out who found them and what's going to happen. However, in Season 7B, the scene was revealed to be just a dream sequence, which ultimately meant nothing.

The moment he got beheaded, he was out of the game.

Having watched the entire series from start to finish, I'd love someone to explain Bethany Young to me again. So, her dad was having an affair with Jessica DiLaurentis? Bethany killed Toby's mom for no reason? She was wearing the same yellow top as Alison the night she disappeared, which meant she was killed instead. None of this makes any sense, or had any explanation in Season 7. What the hell?!

So, Ezra turned out to be Board Shorts. But not even I. Marlene King knows who Beach Hottie was. While she speculates that it was Wilden, she's still unsure. Clearly, it doesn't matter, like, at all.

10. Nicole's Disappearance Has Something To Do With A.D.

It seems as though Nicole's disappearance was just some random, cosmic, awful thing that happened, having no sway on the end of Pretty Little Liars at all.

11. Sara Harvey Is A Major Villain

12. Maya Would Be Found Alive

Nope. This has yet to happen.

Pretty Little Liars is full of surprises and knows how to shock its audience with amazing plot twists. But every mystery has a certain amount of red herrings, and even PLL wasn't totally immune.

More like this
Everything To Know About 'And Just Like That...' Season 2
By Jack Irvin and Grace Wehniainen
'The Last Of Us' Episode Schedule Competes With The Super Bowl & Oscars
By Brad Witter
Pedro Pascal Barely Got Through The "Lisa From Temecula" 'SNL' Sketch
By Stephanie Topacio Long
Melanie Lynskey Plays A “Ruthless Leader” In 'The Last Of Us'
By Brad Witter
Get Even More From Bustle — Sign Up For The Newsletter
From hair trends to relationship advice, our daily newsletter has everything you need to sound like a person who’s on TikTok, even if you aren’t.