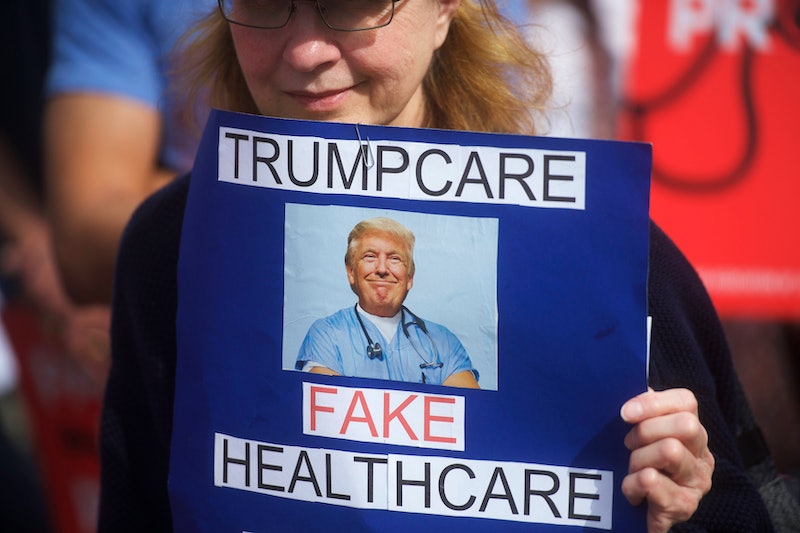 In dark times, it can sometimes be helpful to attempt to face struggles with a dose of humor or drama. Facing the problems in America today can feel overwhelming and impossible to plow straight into. Currently, we have a president in the White House who has shown time and time again that his interests do not lie in making this country a better place for all — only for a few. He's backed by Republicans in the senate who have been working to repeal and replace, sometimes not even replace, the Affordable Care Act. Thankfully, the Women's March is determined to stop this. The organization has partnered with Our Lives On The Line, a pro-Obamacare group that's working to increase action against the Republican health care bill, for a healthcare rally this Saturday.

The rally will be taking place country wide with anyone against the repeal of Obamacare being encouraged to "show up on a busy street corner" on Saturday and "make some noise." Instead of one distinct march, this allows anyone, no matter their location, to get involved.

This is an incredibly important issue to get involved in. The non-partisan Congressional Budget Office determined that the original senate bill meant to replace Obamacare would have taken healthcare away from at least 22 million people. If Obamacare is repealed without a replacement, at least 30 million people would lose healthcare.

If you can get involved this Saturday, find a list of locations here or organize your own local event. Have a lot of thoughts but don't what to say? Check out the punny signs you need for the healthcare rally to ensure you don't get too overwhelmed.