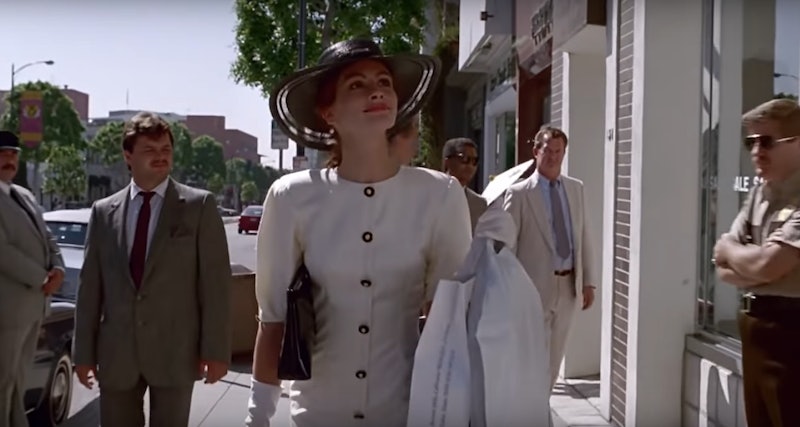 Montages are a way for a film to quickly move a story forward by showing you what went on over a long stretch of time, using only a minute or two. Sports movies use montages all the time to condense long periods of training and show progress. They can also be useful when you need to see someone trying on a whole bunch of clothes very quickly, because who doesn't enjoy that? Romantic comedies use them to show people developing feelings for each other — or how they wallow when they screw their budding relationships up. Keep reading to see our picks from some of the best rom-com movie montages out there, from a Julia Roberts and Richard Gere classic to... another Julia Roberts and Richard Gere classic.

Sometimes a rom-com montage is about a breakup. Sometimes it's about two people falling in love. Sometimes it's a bunch of people meeting up at the airport and making you sob uncontrollably no matter how many times you've seen it. (Yes, this is a very specific example. Yes, we'll get to it.) But regardless what the characters are doing in the montage, there's usually something comforting about it. These scenes tend to show a character reaching a high point or becoming a new version of themselves, which makes you root for them even more. Also, montages tend to be funny and feature activities us normal people don't usually get a chance to do — like get expensive makeovers.

These 12 iconic rom-com montages pretty much hit all of those notes. Get your tissues ready for #2 and prepare yourself for massive amounts of chemistry in #6.

Let's start off with one of the most famous shopping montages of all time, from one of the most classic rom-coms out there. Julia Roberts's Vivian goes shopping, orders a pizza, takes some dude's tie, and then delivers her famous line: "Big mistake. Big. Huge!"

The end of Love Actually is a montage of the main characters, and then just a bunch of random real people, greeting their loved ones in the airport with The Beach Boys' "God Only Knows" playing in the background. And, oh man, is it emotional. It's about all kinds of love! Actually!

It can — and has — been argued whether or not Clueless is actually a rom-com, but because Tai's makeover montage is too wonderful and memorable not to include on this list, we're saying yes. This scene is also responsible for making many kids in the '90s believe that makeovers are a thing that commonly happen in real life.

The montage where Rachel gets ready for Colin and Araminta's wedding in Crazy Rich Asians became an instant classic in the makeover montage, genre thanks to some hilarious improvised lines from Nico Santos and Awkwafina.

There are two notable montages in the Sex and the City movie. The unforgettable one above is when Carrie has her photoshoot for Vogue and gets to try on a million designer wedding gowns. It's totally self-indulgent (like, Hey, look! We had access to these dresses!), but it's fine, because dress ogling. The other montage is when Carrie packs up her closet and tries on her old clothes.

Crazy, Stupid, Love also features two montages, but this one comes out on top. (Here's the other.) Ryan Gosling and Emma Stone's characters stay up talking all night about random stuff and laughing — and it was all improv! You can really tell watching it because it feels so natural, and their chemistry is just next level.

When she's facing heartache, Bridget Jones chooses to have herself a montage. She also chooses "vodka and Chaka Khan" and to switch out all of her self-help dating books for anti-men ones.

You see, the two dresses fusing together represents Andie becoming her true self and being confident in it. Plus, she has to wear the pink dress in order to fulfill the promise of the title.

This is a montage that comes right at the opening credits, but it's very important to setting up the story. Instead of waiting to explain Andie's (yes, another Andie) career in the movie, this montage shows us exactly what type of stories she writes at Composure, so we can get right into things.

This montage from 13 Going on 30 spans by far the longest amount of time of any on this list. Seasons change! Leaves become snow! Snow becomes flowers!

If the movie is called 27 Dresses, we better get a look at all 27 freakin' dresses, so this one gets bonus points for delivering on that.

And we're back to Julia Roberts and Richard Gere once again. This montage shows Maggie and Ike falling in love and a grandma delivering the line, "I like his tight butt!"