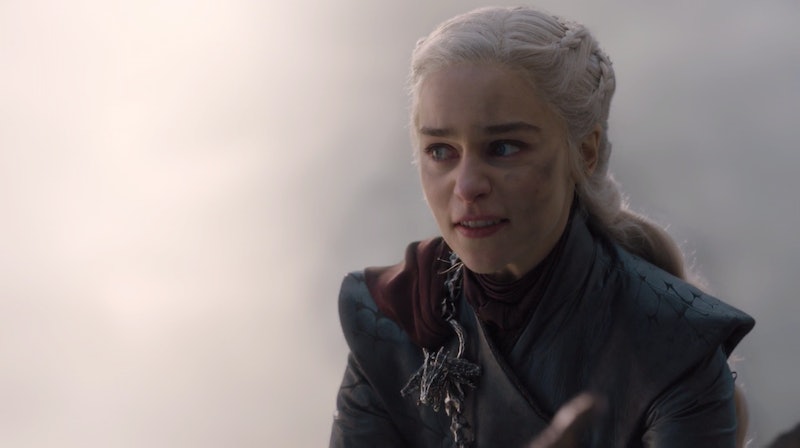 Spoilers ahead for Game of Thrones. Daenerys had been the one who deserved the throne more than anyone going into the penultimate episode of Game of Thrones. But just as her kingdom was in her grasp, she snapped and turned pure villain. At this point, Daenerys has to die in Game of Thrones since she's gone all Mad Queen. Sure, she might claim that she was saving Westeros from a tyrant, but in reality, she took tyranny to a whole new level by burning up King's Landing after the soldiers and citizens had surrendered.

Even if you think the Game of Thrones showrunners have been making terrible decisions this final season, it doesn't seem possible that David Benioff and D.B. Weiss would be foolish enough to leave Daenerys alive. Ending it with a murderous Daenerys on the Iron Throne would be the ultimate letdown. So with her fulfilling the "Mad Queen" prophecy after her father had been the Mad King before her, it only seems fitting that she'll die in an act of regicide. Thankfully, there are still plenty of good guys left on Game of Thrones who will fight to protect the realm from Daenerys. So here are just some theories on how Daenerys Stormborn could meet her end.

More like this
Viserys’ Fate On 'House Of The Dragon' Could Differ From The Book In This Surprising Way
By Grace Wehniainen
Nicola Coughlan Shared A Lady Whistledown Excerpt From ‘Bridgerton’ Season 3
By Grace Wehniainen, Alyssa Lapid and Sam Ramsden
'The Lord of the Rings: The Rings of Power' Revisits Iconic Spots From 'The Hobbit'
By Darshita Goyal
'House of The Dragon' Episode 6 Will Take Place A Decade After Episode 5
By Kadin Burnett
Get Even More From Bustle — Sign Up For The Newsletter