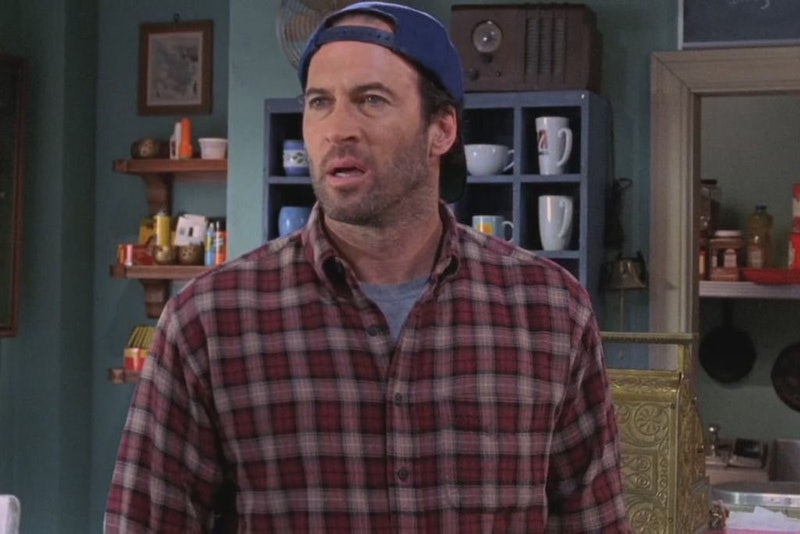 If you consider yourself a fan of Lorelai and Rory Gilmore (who doesn't?), then you probably remember everything about Lorelai and Luke's relationship. What you may have forgotten though is just how much Luke changed on Gilmore Girls over the course of seven seasons. Like most other main characters of the dramedy, Luke Danes experienced a lot of things, but it was his relationship with Lorelai that impacted him the most.

Of course, Rory, his nephew, Jess, and his daughter, April, all had a massive effect on him, as well, but it was Lorelai who influenced Luke's life immensely — and not just by helping him win partial custody of April or by falling in love with him. Lorelai pushed Luke out of his comfort zone and helped him to look at situations in a whole new light. As soon as Luke met Lorelai, his life was changed for the better. Like he told her in Season 5 after they started dating, from the get-go, she impacted him in a great way. So much so, he kept the horoscope she gave him during their first meeting in his wallet for eight years. That's how much of an effect she had on his life.

From the pilot all the way to the series finale, Luke changed — thanks a lot to Lorelai. Now, that's not to say she deserves all of the credit, because it was Luke's choice to be the man he was from beginning to end, but the people he surrounded himself with and the woman he fell head over heels in love with definitely played a part.

With that said, let's take a look at how the owner of the best place to get a coffee in Stars Hollow grew as a character.

1. He Fell In Love With Lorelai

If you remember the pilot, then you know that Luke seemed to be in love with Lorelai from day one. The way he looked at her was a sign, but as the series went on, his feelings developed even more. They certainly had their ups and downs thanks to many factors (April, Christopher, etc.), but they managed to find their way back to one another by the end of Season 7. Most fans will probably agree that it took a ridiculously long time for Luke and Lorelai to reunite romantically, but the fact that they did is all that matters.

2. He Opened Up Emotionally

Luke was never someone who expressed himself emotionally or discussed his personal life. So, when he did, it was a beautiful sight. It wasn't until near the end of Season 4 when Luke started to show Lorelai exactly how he felt about her. He even read a self-help book that helped him "see her face" and danced with her at Liz and T.J.'s wedding. Outside of Lorelai, when he took care of Jess, he found himself opening up to ensure his nephew had the best life possible. Granted, Luke's feelings were rarely communicated without cynicism or sarcasm, but his ability to genuinely convey them before the series wrapped showed huge growth.

3. He Showed His Vulnerabilities

At times, Luke was pretty guarded with his feelings, but there were certain instances when the flannel-wearing restaurant owner showed his vulnerable side. For example, there was that time Lorelai learned about his "dark day" and Luke ended up showing her just how much he really missed his late father. Then, there was the time Luke let Lorelai and Rory help out at the diner while he planned funeral arrangements for his uncle. His hard shell managed to soften.

4. He Found Some Common Ground With Emily

Emily never really liked Luke — and vice versa. Yet even still, they managed to find some common ground when it came to Lorelai. Far too often Emily interfered with her daughter's love life, including the time she invited Christopher to her vow renewal with Richard. After basically being responsible for Luke and Lorelai's breakup in Season 5, Emily went to Luke and told him to go back to her daughter. Luke and Emily may have never understood each other completely, but the one thing they were on the same page about was how much they wanted Lorelai to be happy.

5. He Became A Parent — In More Ways Than One

Whether it was with Rory, Jess, or his biological daughter, April, Luke was a father figure throughout the series. If you were to ask him if he saw himself as a father in Season 1, he probably would have said no, but by the time Season 7 rolled around, there was no denying it. Luke impacted the lives of these three individuals from a young age all the way to adulthood.

When it came to Luke's diner, his rules were meant to be followed, especially the "no cellphones allowed" policy. So, when he had to share his kitchen with Sookie in Season 3 after a fire at the Independence Inn, he wasn't happy, but he at least somewhat learned how to share. This carried over to every time Luke stepped into Sookie's kitchen at the Dragonfly Inn and they shared the space that meant something to both of them as cooks.

In Season 1, Lorelai gave Luke his famous navy blue baseball cap that he wore for the remainder of the series. It was the one big wardrobe change that he allowed with no argument. He totally loved it.

8. He Became Friends With Kirk

Whether Luke would ever admit it or not, his relationship with Kirk was a special one. They didn't always see eye to eye or have all of the same interests, but there's no denying they formed a friendship. When Luke agreed to keep an eye on Kirk and his night terrors at the practice run of Lorelai and Sookie's inn and then chased after a naked Kirk, he proved himself to be a true friend.

9. He Realized This Major Mistake With Lorelai

Luke keeping April a secret from Lorelai was only a small contributing factor to the downfall to their relationship. It was also a huge error on his part. It wasn't until Season 7 (yes, it took that long) in the middle of the hay bale maze that Luke finally apologized to Lorelai for it. Despite it taking forever for him to voice his mistake, at least he recognized it and said it to Lorelai's face.

10. He Found "Closure" With Christopher

OK, they may have not found your typical closure, but when Luke punched Christopher after learning he had slept with Lorelai shortly after their breakup, it helped both men a lot. They also got into another fight in Season 7 that helped release the aggression they held for each other. In the end, they pretty much avoided each other with Luke attempting to take the high road for both Lorelai and Rory's sake.

11. He Released Some Control Over Luke's

Luke had a hard time letting others help out at Luke's or stepping away if he needed to. However, there were a few times he allowed Caesar to run the joint. As previously mentioned, he even let Rory and Lorelai help out at the diner after his uncle died. Luke relinquishing control of the diner, albeit only a little at the time, was major for him.

12. He Planned A Major Town Event

Luke wasn't much for parties or attending big celebrations, especially if they were planned by Taylor. That doesn't mean he never showed up, because he totally did, but he also arrived with his cynicism in tow. That all changed in the series finale when he planned Rory's going away party. He enlisted help from the entire town, so Rory would have the perfect send-off. Aw, Luke, he could definitely be a sap when he wanted to.

There's no denying Luke changed quite a bit over the seven seasons of Gilmore Girls — and still remained a fan-favorite character, in the process.

More like this
24 Years Ago, 'Friends' Dropped Its Most Underrated Ross & Rachel Episode
By Grace Wehniainen
Netflix Reveals First Look At Wednesday In The 'Addams Family' Spinoff Series
By Bustle Editors
Here's What Jeffrey Dahmer's Dad Has Said About His Other Son, David
By Grace Wehniainen
'Grey's Anatomy's New Intern Got Advice From Dr. Bailey Herself
By Grace Wehniainen
Get Even More From Bustle — Sign Up For The Newsletter