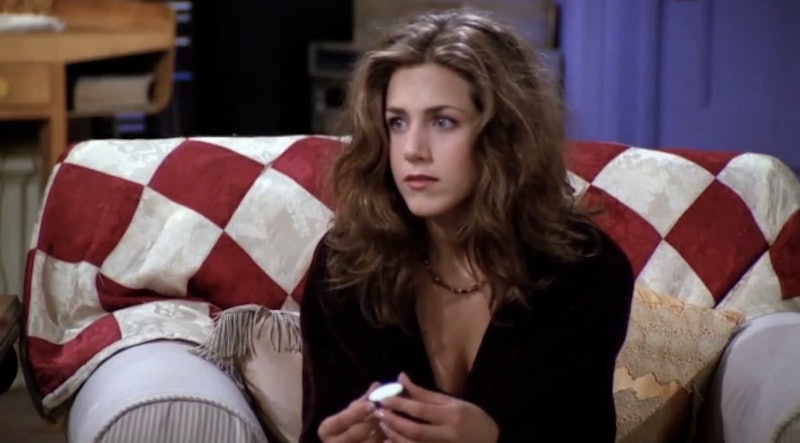 It happens with any TV show that spans a decade, but it's especially true for this one: Friends is so different when you compare Season 1 to Season 10. So many things changed by the time everyone gave up their keys to Monica's apartment, and nothing changed more than the characters themselves. In particular, Rachel Green changed from the Friends pilot to the series finale more than almost any other character, and by the end of the show, she's practically unrecognizable from the woman who was introduced in the very first season.

In the pilot episode, Rachel has been out of contact with high school best friend Monica for years, and she's just left her fiancé, Barry, at the altar, knowing that she shouldn't marry him. She's starting over with no job, nowhere to live, and no actual knowledge about how the real world worked. Her father cuts her off, and she's thrust into harsh reality, having to quickly figure out how to be an adult. She has the most growing up to do out of everyone in the Friends cast, and she does it, even though she makes plenty of mistakes along the way. Then again, isn't that what happens to all of us?

Here are all the ways Rachel changed from the Friends premiere to the finale. It's OK to shed a little tear of pride or two.

1. She Built Her Own Career

When Rachel shows up in Central Perk, she has no job, no experience, and no skills. All she knows is that she's interested in fashion, and obviously, just being interested doesn't take you very far. But even though she starts out (poorly) serving coffee, she works hard and makes connections. Eventually, she starts working in the fashion business, including with Ralph Lauren, and by the end of the series, she's offered a job in Paris with Louis Vuitton, even though she turns it down. That's impressive.

Rachel never seems especially interested in having children, but when she finds herself unexpectedly pregnant in the Season 7 finale, she immediately kicks things into high gear. She doesn't plan to lean on anyone else; she raises Emma with the help of Ross, but she's still a pretty awesome single mom.

3. She Learned How To Navigate Relationships

Anyone who feels trapped in a relationship with someone, but runs away from him on their wedding day probably has some baggage they need to work out in the love department, and as the show progresses, so does the way that Rachel handled her relationships. There are definitely times she falters (like the disastrous experience of dating Joshua... or how badly matched she and Tag are), but she ends up figuring out what she wants and needs out of a partner.

4. She Gained Her Independence

When Rachel's dad cuts her off in the series premiere, she's horrified and has no clue what she would do without access to his bank account. But by the end of the series, she doesn't need anyone else at all. Her career is thriving, she's proved that she can kill it at being a single mother, and the only thing holding her back from moving to a foreign country by herself is how she feels about Ross. This might be the biggest change Rachel makes, and it's fun to see it happen each season.

5. She Learned The Right Way To Treat People

Knowing Rachel from the pilot (and from some of the flashbacks from her earlier years), it doesn't seem like she understands how important it was to treat people well. She lost touch with Monica, her best friend for most of her life, and didn't invite her to her wedding. Early on in the show, she forgets the names of people she went to school with, and she's selfish at times. But by the end of the series, she's so loving and thoughtful.

6. She Grew To Hate Who She Used To Be

The Rachel fans meet, wedding dress and all, is totally different from the one they grow to know and love over the course of the show. And once she realizes that she isn't who she wants to be, any reminder of her former life seems to instantly turn her off. Whether she's catching up with her old friends, reuniting with her former BFF, Mindy, or seeing how spoiled her sisters are, it becomes obvious that Rachel never wants to return to her roots.

7. She Figured Things Out With Ross

Ross and Rachel's relationship is always a complicated one, even before the timeline of the show begins, because he had a crush on her when they were teenagers. The earliest seasons of the show are so focused on why they are or are not right for each other, but after she does all that growing up, Rachel realizes that she does want to be with Ross. When she gets off the plane, they finally have the chance to pursue their relationship in a mature, adult way. Pretty different from the way they approach things earlier on.

8. She Became Less Self Absorbed

Rachel in Season 1 isn't entirely stuck up her own butt, but she definitely doesn't make it a habit to think of others first. However, after a lot of maturing (and a lot of episodes), she becomes so much less self absorbed. Where she once thought only of how things will affect her, she becomes more and more sympathetic toward others as the show progressed — and in turn, that makes her that much more likable.

9. Her Hair & Her Style Got Way Better

The haircut Rachel sports early in the series may have become a cultural phenomenon, but by the end of the series, her hair is so much better. Of course, some of that probably had to do with Jennifer Aniston herself, but it's still true — it looks healthier and sleeker. And as lovable as she is in '90s fashion, the grown up Rachel actually looks like she works in fashion and is always well put together.

And not just because they briefly date, as weird as that time period of Friends is. In the pilot episode, Rachel and Joey have just met, but by the end, they are closer than ever. They even become roommates, and Joey obviously loves her enough to let Emma live with him too and become like an uncle to her.

11. She Became More Understanding Of Her Own Parents

Rachel's relationship with her parents starts out very complicated. She's too scared to stand up to her father (although, to her credit, he's a really scary dude) and she basically lets her mother bulldoze her. And when she finds out they are getting divorced, she has a really difficult time coping, which would happen to anyone going through something like that. But by the end of the series, she is better prepared to stand up to them, and even tells her mom not to live with her after Emma was born. Progress.

Remember the time Rachel's New Year's resolution was to gossip less? Slowly, but surely, she learns. Of course, that's the kind of thing that sometimes happens when you become a mother with a high-powered career who doesn't have much time for anything else, but it definitely still counts.

There's so much to love about Rachel Green as a character and all of the ways she evolved each season. She definitely still has her flaws, but she's easily one of the most likable characters on the show. Who wouldn't want her for a BFF?