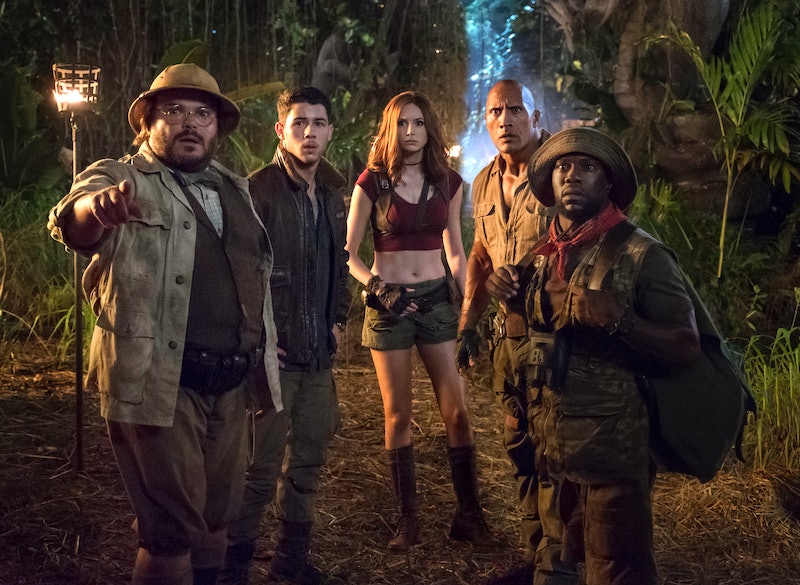 There are a lot of things to love about 1995's Jumanji starring Robin Williams. The late, great actor aside, the film boasts a bevy of memorable performances, iconic set pieces, and some — OK, let's be honest, pretty laughable — CGI. And who can forget the heart-pounding beat of those eerie Jumanji drums? It's an adventure movie that has delighted audiences for more than 22 years, and now, there's a new chapter in the Jumanji universe about to be released. Hitting theaters this holiday season, the 2017 Jumaji reboot, Jumanji: Welcome to the Jungle, will breathe new life into the iconic franchise. Though it takes place over two decades later and features all new characters, there are so many reasons for fans of the original film to be excited for 2017's Jumanji iteration.

Not only will this new chapter pay homage to its origins, it will also offer up new storylines and adventures, and a fresh, millennial-friendly way into the world of Jumanji. Alan Parrish might be long gone, but his memory and the world in which he lived are as alive as ever.

Jumanji: Welcome to the Jungle surrounds four high school students stuck in detention. When they are sent to clean out the school's basement, they discover an "ancient" (lol) video game called Jumanji. To play, they each choose an avatar, and — you guessed it — get sucked into the game. The film stars Dwayne Johnson, Karen Gillan, Kevin Hart, and Jack Black as the four avatars that live inside the game. If the updated plot isn't exciting enough, here are 13 other reasons fans of 1995's version should be utterly stoked to see the world of Jumaji coming back to the big screen.

1. It's A Continuation Of The Story — Not A Remake

Thankfully, Jumanji: Welcome to the Jungle is neither a remake of the original film nor a straight sequel. It does, however, exist in the world (or worlds, to be more accurate) that originated in the first film.

Kevin Hart, who plays Moose Finbar, explains: "People think that this is a remake of the original Jumanji, and it’s not. It’s a continuation. You don’t touch what’s great and try to redo it," he says on set of the film, taking shelter from the jungle under a canopy. "There's a generation that has no idea what Jumanji is, and that’s the generation of today... the social media generation, the younger generation... In no way, shape, or form are we disrespecting, or reshaping, or reforming the original Jumanji."

2. It Takes Place In The Jungle Where Alan Parrish Was Trapped

In the 1995 original, Robin Williams' character, Alan Parrish, becomes trapped inside the game for 26 years. When he emerges, he is covered in leaves, has an unruly beard, and regales the children of stories of the terrifying jungle where he was trapped. But we never actually see the jungle in which Parrish grew into adulthood. Until now.

"I’ve always wondered where Robin Williams’ character went for all of that time," Karen Gillan, who plays Ruby Roundhouse, says. "It was sort of left to the imagination a little. That’s where this film comes in. We get to see exactly where he went, and what it feels like, and what it looks like."

Fingers crossed they've graduated from wearing leaf loincloths in the 22 years since the original.

3. The Characters Have Multiple Lives

Because they enter the world of Jumanji through a video game, the characters are able to die and come back life video game characters can. Director and executive producer Jake Kasdan explains, "They have a finite number of lives until it's game over. It's the tension of having to complete the game... get to the end of the adventure before they run out of lives."

Hopefully allowing them multiple lives will let these characters engage even further with the life-threatening elements fans got a taste of in 1995's Jumanji.

4. Nick Jonas Is Super Coy About His Character — But That's A Good Thing

On set of the Hawaii based production, Nick Jonas is being extremely cautious when talking about his character. In fact, he won't say much at all.

"I can’t really say. My character is someone that our four heroes find in the game," he says. "I had to grow my hair out, which I haven’t done in a while."

This doesn't sound like much, but he gives enough clues to contemplate. My personal theory is that Jonas will play a relative of Parrish, because it all adds up. First, he finds the characters in the game, meaning he likely lives inside the world Parrish grew up in. And second, he had to grow out his hair, just like Williams did.

Jonas as the long lost son of Alan Parrish? Now that would be a great reveal.

5. The Spirit of Alan Parrish Is Pivotal To The Movie

Again, everyone involved in this film is extremely coy, but producer Matt Tolmach does assure reporters that fan favorite Robin Williams is crucial to the movie: "The character that Robin played, the spirit of that character, is something that is massively important to this movie and is reflected in the movie. All of us want to pay homage to him."

Dwayne Johnson, who plays Dr. Smolder Bravestone, echoes Tolmach's sentiments: "I think we came up with some very nice ways to pay homage. I think [fans] are going to be very, very happy with it."

6. It Was Filmed In The Same Location As Jurassic Park

When we arrive on set the cast has only been shooting for about a week and a half. And the location — aside from being filled with bugs constantly biting the actors — is utterly idyllic. Just like the original Jumanji, this location is colorful, vivid, and full of fun. "They shoot Hawaii5-0 on this island as well," Jonas adds. "This location is pretty incredible."

Jack Black insists on singing for much of his interview. Apparently, this is because he's so pumped about a song he crafted with Nick Jonas for the film. (Actually, it's hard to tell if he's being serious about whether the song will actually make it into the movie.)

Regardless, he sings some of the lyrics, "Jumaaanji. It’s the jungle inside your soul. Somewhere deep inside at the end of the wild. Jumaaaanji." Then he snaps out of it. "It’s a collaboration with Nick Jonas. Don’t tell my partner Kyle Gass, Tenacious D. He will kill me in my sleep with a ball-peen hammer if he finds out that I have collaborated with a new rock star. Sorry — upgrade."

Please let this song be in the film — or at least the DVD extras.

8. Just Like The Original, It Will Be Both Humorous & Sentimental

In the film, Black plays a scientist who serves as the avatar for a female high school student who chose "the curvy genius" in the titular game. From the trailer alone, it's clear that Black had a lot of fun performing as the vapid, popular student. "In a weird way, I feel like it was the real life I was born to play. It was very easy to tap into my inner 16-year-old girl. When the game starts she’s a little bummed that she’s taken the shape of an overweight middle-aged man, but uh, dem’s the breaks."

Though it's a comical concept, Black assures there's a lot more going on with his character as the film initially lets on. "She learns some lessons along the way about... what do you call that? When you judge people by their looks and their cover?"

Black may need a refresher himself, but Jumanji promises to be both silly and semtimental.

9. The Special Effects Are Minimal

One of the weaker parts of the original film is its CGI elements. Sure, the film was made 22 years ago, but those animal effects are more than a little distracting. Luckily, the new film will keep things slightly more grounded. "There are not massive visual effects in this," Johnson says. "It's not massive green screen work. There are some really great visual effects that we're going to have, but you know, everything is pretty practical out here in the jungle."

With two stars as fun-loving as Johnson and Hart, it's an easy recipe for dynamic on screen chemistry. "I love Kevin," Johnson says. "We've become really, really close. He's like a brother to me. He believes in hardcore work ethic."

Hart has similar things to say about Johnson, "Dwayne has an amazing approach to life," he says.

And if their social media antics are any indication, their on-screen relationship should be just as compelling.

...And this is coming from a guy who lives and breathes fun. "I would say this is the most fun I've ever had on a set, especially with an ensemble group like this," he says. "The energy is just so awesome, and everyone is really just great. And you guys know this, you've been in business, doing this a long time."

Hopefully this off-screen revelry translates to the film, too.

Unlike the original film which was given a family-friendly PG rating, Welcome to the Jungle is amped up to a PG-13. This means that the adventure, the scares, and the general jungle mischief will likely be intensified.

Producer Matt Tolmach explains, "It's definitely a PG-13. It's intense... very real stakes: A bunch of people stranded in the jungle, having to get out. Naturally the tone became an action adventure movie and then you have Kevin and The Rock and Jack, so both from an action standpoint and a comedy standpoint we wanted to turn up the intensity a little bit and let these people do what they do."

13. Those Animals You Loved From The Original Will Be Back

Who can forget the animals of Jumanji, who seemed to have personalities of their own? Luckily, those beasts will be back. "They're cursed and dangerous in our movie," Kasdan says. "We have tried to do the animals in our own way that I think is worth getting excited about."

From the looks of it, there's plenty to get excited about when it comes to Jumanji: Welcome to the Jungle. Now if only Dec. 20th could come sooner.

More like this
At 28, Rosie Perez Risked Her Career To Stop Playing Stereotypes
By Gabrielle Bondi
At 28, Debra Jo Rupp Was Living A Much Different '70s Show
By Grace Wehniainen
12 Years Ago, Austin Butler Manifested His Oscar Nom In This Disney Movie Scene
By Jake Viswanath
Sandra Bullock’s Razzies Speech Proves She’s The Ultimate Miss Congeniality
By Sam Ramsden
Get Even More From Bustle — Sign Up For The Newsletter
From hair trends to relationship advice, our daily newsletter has everything you need to sound like a person who’s on TikTok, even if you aren’t.