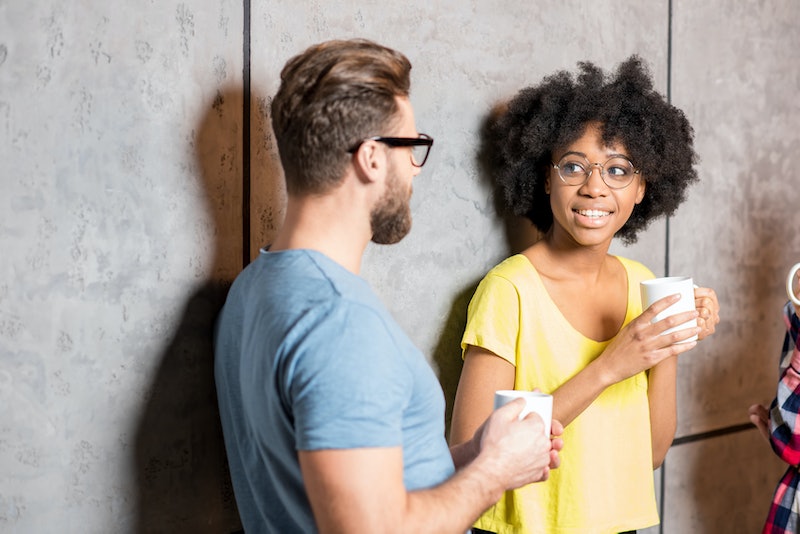 A lot has changed in the six months since Donald Trump was sworn into office, both on a political level and a personal one. Bustle’s State of Our Unions series looks at how millennial women's relationships with their friends, family members, and romantic partners have been affected since the 2016 election. Today's topic: how life at the office is being impacted.

No matter who you voted for in the presidential election, I'm sure Donald Trump is a popular conversation topic at your office. He certainly affected romantic relationships and friendships, so I wondered how much he affects people's office politics, so to speak, and if he affects their work lives. After all, I'm sure you and I both know people who like to talk about Trump as though there are no other conversation topics left on Earth.

"It's important to agree on an approach for coping with this situation," Grant Langston, CEO of eHarmony, tells Bustle. "Be open-minded. The best thing any of us can do is to remain curious and not judgmental, and seek to understand others with differing positions. If you are not happy with the direction things in the country are going, ask yourself, what can I do, that is in my control, to improve the situation? Can you volunteer for an organization that aligns with your beliefs? Doing something positive will make you feel less powerless. Anytime any of us can help another, or contribute in some positive way to our society, we are bettering the world."

I could not agree more with Langston. Plus, a survey conducted by Harris Poll for the American Psychological Association (APA) among 927 U.S. adults last year found that political talk in offices had increased. The survey explored workplace conversations regarding the Clinton-Trump race. It found that 47 percent of all respondents said people were more likely to discuss politics this past election season than in the past. I believe it. You?

The above survey also found that more than one in four employees had been negatively affected by Clinton-Trump conversations. For those under age 34, approximately 28 percent reported that political discussions at work left them feeling stressed. Plus, one in four millennials said political debates led to workplace hostility, and one in five said they avoided some co-workers because of their political views.

All that said, here's what millennial women told me about how their relationships with their co-workers have changed since the election.

"At first, our office was a MESS after the election — walking into the break room was sure to get you into a heated political debate, and then you'd go back to your desk and could barely focus on actual work. But then the person I report to encouraged us to try NOT to talk politics while grabbing our morning coffee or lunch from the office fridge. And you know what? It's made the office a much happier place! I highly recommend all offices do it!"

"I haven't really noticed a difference in my office. This could be because I work in NYC, where people generally seem to be a little bit more liberal than in other areas of the country. I also just think that since politics is usually a topic avoided in office conversations, that it still holds true even under Trump. People like to keep things like politics and religion separate, and I think that's probably to everyone's benefit."

"I work in the field of education, which means that (almost) everyone in my office is female and liberal to the max. This makes for easy daily conversation. However, as the women's marches started ramping up, one internal conservative exposed her views to a co-worker. If anything, this has obviously required the self-proclaimed feminists to speak louder, prouder, and wear our pussyhats to work on one particular occasion."

"Co-workers are interesting. Since the election, I've been able to see who is depending on a person to make them successful versus getting out and making it happen. I think it has caused me to see people with clearer glasses, good and bad. I've seen more racist comments than ever from both races, and how it affects how we see one another now. This election REALLY brought out the worst and best in people that was hidden before."

"As it relates to my colleagues and my team, we've always seen what was brewing below the surface unacknowledged, so we aren't surprised that the political climate has become what it has, and we are actually really excited to see people waking up and mobilizing in the ways that they feel called to finally make real and lasting change."

"I feel closer to my co-workers than ever. It's refreshing to know we all agree and we're all in this together. November was a really tough month, but I realized how compassionate and empathetic everyone here is. I think we've all helped each other cope and step up to the plate for women's rights."

"Luckily, we are all like-minded women at the office, and our personal relationships and work relationships all align with our political views. We're VERY lucky!"

"I'd say office politics (no pun intended!) haven't changed much. We're all pretty liberal, and I think if someone DID secretly vote for Trump, they wouldn't admit to it at the office! If they did, I'm sure it would definitely create more office debates and more heated discussions. Personally, I see enough Trump-related debates on Facebook, so I'm glad I don't have to deal with it at work, too!"

"I don't know if my co-workers know this, but I have unfollowed a lot of them on social media, like Facebook. I usually tune them out at the office (all their Trump bashing), but then they kept coming up in my newsfeed. Yes, we all hate Trump, but there are other things to talk about and post about in life! Go do something active to try to change things instead of complaining all the time!"

"My office was a lot worse before the election, like when a presidential debate would be on, and then everyone would 'fact-check' it at work the next day. It made me not make eye contact with anyone, because someone was likely to bring it up, like, 'Did you watch the debate?' or ask about a specific topic that was covered. I also stopped going out to group lunches, where the topic ALWAYS turns to politics (even these days). Someone ALWAYS wants to argue or debate something Trump just did — what happened to dissecting 'Dancing with the Stars' or discussing lighter topics?! Since Trump won, there's not as much conflict at the office, but definitely still a lot of political talk, more than I care for."

"Having spent the last year focusing on local issues and utilizing managerial and leadership skills to organize locally, I have immersed myself in the pain of frontline communities impacted by systemic racism, environmental injustice, housing injustice, and residents experiencing homelessness. When I learn about these struggles, every difficulty in my life of relative privilege has lightened. I am able to show up and get work done professionally, investing my creativity and time, but I do not take the work as a personal investment on my soul, do not take it in as a reflection of my character as a human being, and constantly give myself grace when I make mistakes. This, in turn, has allowed me to give compassion, grace, patience, and steady, focused feedback to my co-workers. If I ever get into a political discussion with a co-worker, I remind myself to seek to understand rather than be understood. This leads to more listening, more questions, and a more broad and fruitful conversation."

"I actually hated going to work ever since before the election, during it, and now (after it). But it's not just work where people want to dissect every little thing Trump does. It happens on social media, too, and I have unfriended so many people who only post about politics (which, in turn, causes so much online fighting!). I read the news — I don't need to see them repost what I've already read, you know?"

"My relationship with my co-workers has changed — but in a good way. We all respect each other's differing beliefs, so not too much drama happens at work around Trump. If anything, some co-workers and I talk more now versus less."

As you can see, luckily, many millennials I spoke to seem to be handling politics at the office just fine. However, what Langston says above is good to keep in mind in case you find yourself stuck in an unexpected political debate. As a reminder, "seek to understand others with differing positions," he says. "If you are not happy with the direction things in the country are going, ask yourself, what can I do, that is in my control, to improve the situation?" Of course, this is the question, right?

More like this
The 19 Best Tweets & Memes About Bisexual Awareness Week
By Lexi Inks
20 Women Reveal Exactly How Long It Took Them To Get Over Their Ex
By Amanda Chatel and Lexi Inks
10 Ways To Be More Empathetic To Your Partner
By Raven Ishak and Lexi Inks
Why Harry Styles & Olivia Wilde Make A Great Couple, According To Astrology
By Nina Kahn
Get Even More From Bustle — Sign Up For The Newsletter