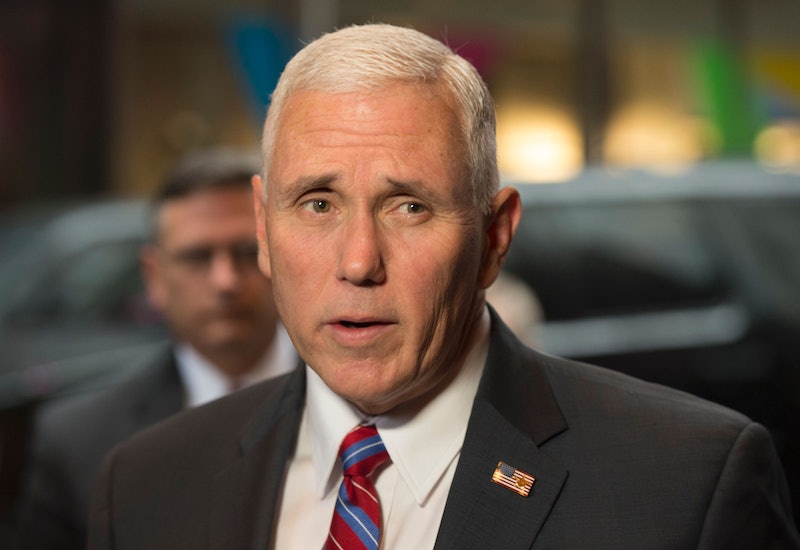 A mere two days before the inauguration of President-elect Donald Trump, it was the soon-to-be vice president in headlines late last night. A rowdy group of LGBTQ activists targeted the rental home of Gov. Mike Pence, throwing a "queer dance party" outside his Washington, D.C., residence. Pence and his wife were not home for the, er, demonstration. However, that didn't stop some 200 protestors from busting their moves near his temporary abode.

One of the protesters, Firas Nasr, told The Washington Post, "We want to send a strong message to Pence that we’re a united queer community." Blasting music from Beyonce and Michael Jackson, the group brought glitter and rainbow flags, turning the neighborhood street into a bona fide celebration.

Pence is seen as a potential threat by the LGBTQ community. While governor of Indiana, he signed legislation allowing business owners to refuse services that were in conflict with their religious beliefs, which in effect often meant refusing service to homosexual customers. He also indicated on his 2000 website that public funds should be used for "conversion therapy," a practice that purports to change a person's sexual orientation. Pence has also been vocally against same-sex marriage.

As the photos below indicate, these dancers weren't letting Pence's policies crash their party protest.

Bright colors, a little bit of lei, and a whole lot of dancing.

It wasn't just youngsters getting their groove on. Check out the shorter lady with the unicorn-cum-rainbow hair accessory. All ages were welcome at this dance party.

No surprise here, rainbows were a regular feature.

She's one of pop's reigning divas, so naturally Rihanna's music was a feature. She's saying "work," but this looks a whole lot more like fun.

What's more fun than a hula hoop? A hula hoop that glows.

A Star Is Born

Firas Nasr, founder of WERK For Peace, had plenty of standout moments in the dance spotlight. The grassroots organization formed in the aftermath of the Pulse Nightclub shooting in Orlando. "WERK for Peace is a queer-based grassroots movement that uses dance to promote peace," states their website.

Whitney Houston's "I Wanna Dance With Somebody"

Is it ever a real dance party without Whitney Houston? Probably not. Here she is, belting out one of the greatest dance tracks of all time, "I Wanna Dance With Somebody."

Not Everything Was Fun & Games

For the two individuals featured here, the policies of Mike Pence meant taking a more serious stance than just dancing.

Apparently in response to Trump's infamous "grab 'em by the p*ssy" comment, this car sign asked for a hands fully off approach to the LGBTQ community.

Solidarity From The Neighbors

One of Pence's new neighbors told USA Today that, since the Vice President-elect has moved in, she's counted over 300 rainbow flags that have gone up along their residential streets.

Nasr demonstrates that political organizing isn't just cold calls and community centers. It can also mean, at least for him, showcasing a set of uncommon moves.

There were no arrests, and no police altercations. That's a solid testament to both protesters and the police ensuring their safety and compliance with the law.

A lot of people forget that Shakespeare, that most famous of English poets, was also always keen for a good, lewd joke. That's what came first to this writer's mind when a poster pointed out that religious registries (of the sort Trump casually suggested might be implemented) are anathema to democracy. No doubt others might find the innuendo strictly offensive, but the tone seems to be in good fun.

And that pretty much describes the protest-by-way-of-dance-party in toto. There's hardly a more light-hearted way to express one's dissent than to bring a dance party to the doorstep of the opposition.