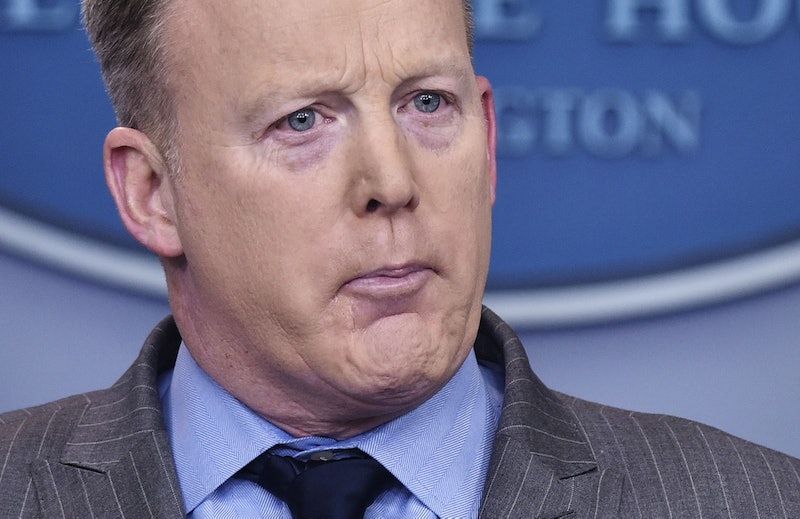 Donald Trump's White House press secretary Sean Spicer inspired a treasure trove of memes on Twitter after his tirade on the press for how it depicted the size of Trump's inauguration crowd. But after Trump himself claimed to have a "running war with the media" during an address to the CIA on Saturday, it's difficult to be surprised by any statement made by the brand new administration. Now that Spicer has hopped on Trump's anti-media bandwagon, the internet is taking note in the most humorous way.

In case you were wondering, the National Park Service does not count how many people were in the crowd watching Trump be sworn-in to office on Friday. However, a comparison of both photos of the National Mall and Washington D.C. Metro trips from Jan. 20, 2017 and inauguration days from years past suggest the size of Trump's audience fell short. But in the press briefing room on Saturday, Spicer taught reporters what he surely believed to be quite the lesson:

Some members of the media were engaged in deliberately false reporting ... This was the largest audience to ever witness the inauguration period both in person and around the globe.

The aforementioned indicators of crowd size say otherwise, inviting questions regarding Spicer's interpretation of the facts. Here are some of the best Spicer memes that have born as a result:

Nope, that was long before Trump's presidency. But what difference does 5 or 6 years make, really?

I can neither confirm or deny.

If this is indeed a nod to George Orwell's famous dystopian novel, bravo.

Crystal Pepsi was actually a thing in 1992.

This isn't entirely unlike his exaggerating the size of Trump's inauguration crowd.

But it's such a lovely place.

So Many Storm Troopers

And with the new release of Rogue One, this analogy is both timely and amusing.

Who Let The Dogs Out?

After all these years, this is quite the confession.

The Earth Is Flat

Let's hope the groundhog doesn't see his shadow this year.

Bringing The Boys To The Yard

Don't lie to yourself. It brought all the boys.

At least he got part of it right. Coconuts do indeed have hair — sort of.

As you've probably gathered #SpicerFacts are anything but facts. And though the hashtag and the memes that go along with it are a riot, such blatant rejection of the truth shouldn't be dismissed as a normal tendency. Memes are great, but holding your officials accountable is even better.