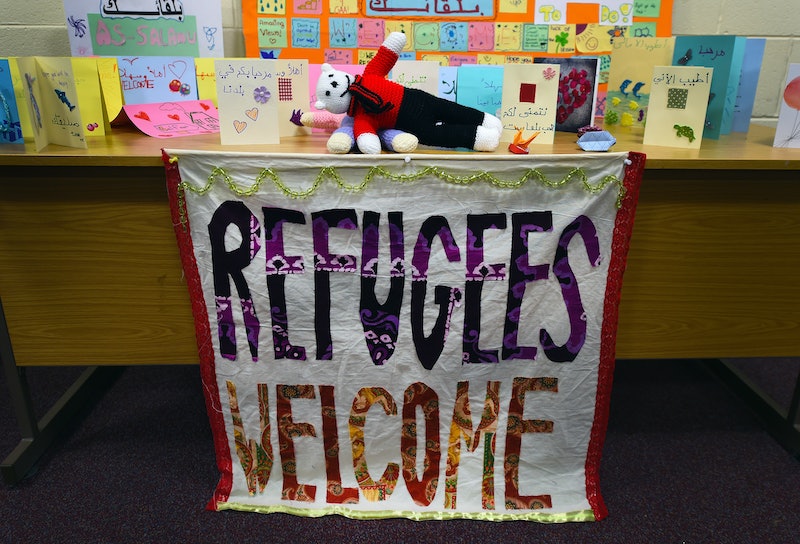 President Donald Trump's executive order banning refugees and immigrants from seven countries from entering the United States has thrown thousands of lives into chaos. Immigrants and refugees with visas are either being prevented from entering the country or are being detained when they arrive. There are many ways to help immigrants and refugees impacted by Trump's order, both from within the United States as well as abroad, and this support is very much needed.

Federal judges in several states have resisted Trump's executive order and stopped immigrants and refugees being detained at airports from being deported. But still, these bans are being enforced inconsistently across the country and are also only short-term solutions. Furthermore, many refugees and immigrants across the United States and the world are currently stuck in limbo, either being detained at U.S. immigration, unable to return to or immigrate to the United States despite having legal visas, or unable to leave the United States for fear of not being allowed to re-enter the country.

Thus, urgent help is needed for all of the individuals and families affected by the immigration and refugee ban. The following is a list of 13 ways in which you can contribute your resources, skills, and time right now to help those affected by Trump's executive order.

The following organizations jointly filed a lawsuit on behalf of two immigrants being detained at JFK airport, which caused a New York federal judge to put a stay on the executive order: the American Civil Liberties Union (ACLU); the National Immigrant Law Center (NILC), the International Refugee Assistance Project at the Urban Justice Center; Yale Law School’s Jerome N. Frank Legal Services Organization; and the law firm Kilpatrick Townsend & Stockton. I strongly recommend considering donating funds to any one of these organizations, particularly the ACLU and the NILC, in order to help fund their continued efforts to assist immigrants and refugees.

Click here for a helpful template listing contact information for senators and governors, as well as their stance on the executive order. Congressional representatives are not included on this template, though you can easily find their contact information via Google.

Since the executive order and subsequent detentions were announced, people have been protesting at airports all over the country to demand that immigrants and refugees are released from detention and to welcome immigrants into the United States. Keep an eye on social media to see if crowds are gathering at an airport near you (or encourage them to gather yourself), and consider heading over in-person to take a stand. This is still incredibly necessary, as travelers continue to be detained and reportedly denied access to lawyers.

4. Provide Necessities To Those At The Airport

While it is unfortunately impossible to reach the individuals being detained at airports around the country, providing basic necessities to those outside of the secure area — families waiting indefinitely for detainees, lawyers and translators working pro bono to secure their release, and protestors, among others — would likely be very welcome. Consider heading to your local airport to provide food, drink, and other necessities to those who are waiting and working.

5. Offer Your Legal Or Translation Skills

If you are a lawyer or translator, strongly consider heading to your local airport to offer assistance to families of those being detained. Or, if you are unable to head to an airport, seek to offer pro bono legal advice or translation services to immigrants with legal U.S. visas who are currently stranded abroad.

Use social media to ensure that immigrants, refugees, and their families know their rights, particularly if they are planning to traveling to or from the United States anytime soon. Experts advise that arriving immigrants refuse to sign anything and insist on speaking to a lawyer. Families of immigrants being detained can also speak with some of the many lawyers currently installed for free in U.S. airports around the country. Additionally, current immigrants living in the United States are advised not to leave the country. Use Twitter, Facebook, and other social media outlets to ensure that those affected by the ban know their rights and are prepared.

Today, the state of New York set up a 24/7 refugee hotline which allows New Yorkers to "report family members, relatives, friends or colleagues who they believe are passengers on flights coming into the state, but are missing or believed to be detained." The toll free number for the hotline is 1-888-769-7243; I recommend sharing the number widely, including on social media and at New York's airports if you are a New York resident.

It is certainly a somewhat frightening time to be an immigrant in the United States. Take the initiative to make immigrants already living in your local community feel welcome and safe; get to know them, spend time together, and learn about each others' cultures. One of the best ways Americans can fight the anti-immigrant rhetoric perpetuated by the executive order is to continuously embrace immigrants and ensure they fell welcome in the United States.

9. Open Your Home To Those Stranded, Stuck, Or Helping

If you are in a position to do so, consider offering immigrants and/or their families a place to stay. This applies to people abroad and in the United States. Furthermore, families of detained immigrants as well as lawyers seeking to assist these individuals would likely be open to staying in a place close to the airport for ease of access, so consider opening your home to them if you are in a location nearby.

Consider donating funds to several individual GoFundMe campaigns started for immigrants who are stuck or in dire straits due to the executive order. Some of these campaigns include funds for a refugee family now fearful of flying to drive to Texas from Oregon to meet their relatives, as well as legal funds for an Iranian Ph.D. student who is stranded in Iran after a vacation visiting family and cannot return to her U.S.-based school.

In addition to airport protests, consider joining a public march or rally in your city to protest the executive order and fight to ensure that it does not remain in place long-term. Thousands of people came together across the country this weekend to protest against the order's anti-immigrant sentiments and it is likely these protests will continue throughout the week; keep your eye out for upcoming events on social media.

There are nine voluntary agencies that have cooperative agreements with the State Department to resettle refugees. Contact your local affiliate for one or several of the agencies on this list in order to contribute your time or resources. It's even more important than ever to help refugees already in the United States to ensure that they feel welcome, safe, and cared for under the Trump administration. Furthermore, creating an enormous volunteer list of Americans willing to help refugees will be a direct affront to Trump's executive order.

Spread the word about how Trump's executive order is unjustly affecting immigrants, refugees, and their families. Use social media as well as in-person networks to ensure that your messages reach as many people as possible. Furthermore, if you do go to an airport or rally, make sure to document the situation and to speak with immigrant families and (with permission) record your experience. Information is power, and the more people that know about the damage being caused by the executive order, the larger the movement against it will become.

Helping immigrants and refugees who are enduring much hardship is exceedingly urgent. If possible, do as much as you can to both address immigrants' and refugees' immediate needs as well as to protest the immigrant and refugee ban and help ensure it is overturned.