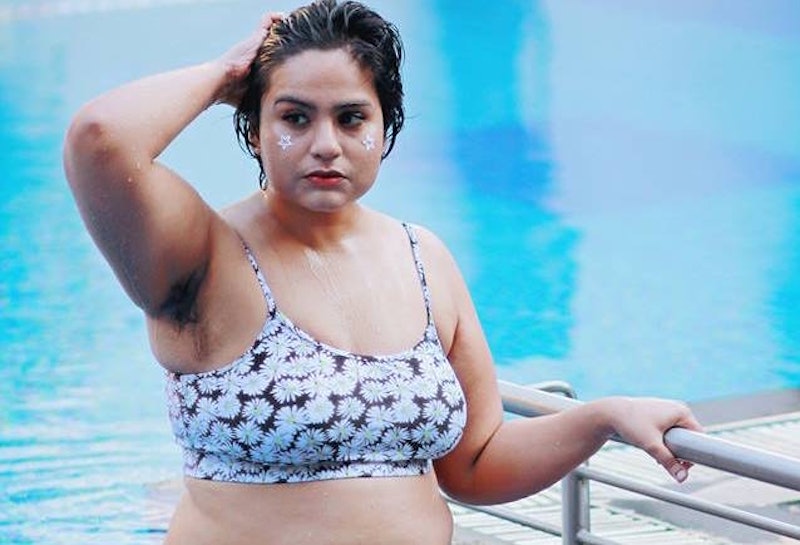 In an era when size acceptance activism is (thankfully) more available on the internet, it's not uncommon to come across lists that champion plus size "rules" to consider breaking. For too long, fat babes have been told to step away from the crop tops, find the most slimming silhouettes on offer at the department store, and discard any wears that aren't black. Proponents of fat positivity tend to preach the very opposite, though. Their wardrobes are often jam-packed with booty shorts, bold patterns, and bright hues.

The alleged "rules" for how to conduct oneself as a plus size person clearly don't begin and end with "avoid horizontal stripes." Visibly fat people are regularly told not to be seen eating "unhealthy" food in public. Every item in their wardrobes is meant to possess the core purpose of hiding their bodies. Workout videos are supposed to be posted to Instagram as proof that they are active despite living in a body folks correlate to inactivity and lack of discipline. It never ends.

For fat babes, it often feels like those rules are there to make plus size humans acutely aware of the idea that they should be remorseful for taking up so much space when, in reality, there isn't anything to apologize for in the first place. With that in mind, 15 plus size and fat positive influencers have shared their favorite "rules" to break in the spring and summer seasons — particularly if you're kind of bored of the horizontal stripe thing.

Designer and plus size blogger Alysse Dalessandro of Ready To Stare is here for the intimates-as-daywear look. She recently rocked a royal blue bra as a top (which just so happened to match her jacket perfectly). "I guess you can see my underwear through the skirt, so that's a thing too," she jokes.

The underwear as outerwear trend started getting mainstream traction in 2016, with celebrities like Rihanna, Lady Gaga, Beyoncé, and Kendall Jenner all becoming active sartorial players. Unfortunately, we haven't seen a lot of Hollywood plus sizers joining in on the fun, likely because fat humans are supposed to hide their bodies at all times. Dalessandro is haven't any of that, though. As the weather warms, why not drop the top?

Angelina Maryann of Keep The Curves is a fan of nude beaches. But, as she tells Bustle, when you "have a fat body, you aren't suppose to be proud of showing skin, especially baring it all."

She'd be lying if she said that she never gets afraid of completely disrobing on the naked seaside, even if in the company of friends. "But it feels glorious to have every inch of your body covered in sun."

At the end of the day, no two bodies on that beach will be the same, and yours will just be one small part of the bare-assed canvas.

Plus size fashion and lifestyle blogger Amanda Crichton of Amanda Apparel will eat in public whenever she damn well pleases. "When I posted this [photo] on Instagram, I captioned it: 'Let Her Eat Cake or Glorifying Obesity,' a portrait of the blogger," she tells Bustle. "I love that my mouth is agape, my belly outline is visible, and I seem to be serving severe side eye."

Instead of trying to "suck it in," or take small bites, or make a tiny portion last through the entirety of the evening meal, consider practicing intuitive eating. Get something off the menu that you're craving — something that'll make you happy. And don't force yourself to pretend that you're not enjoying it along the way. You're entitled to eat food, and you're entitled to love the food you're eating.

Perhaps the most obvious "rule" fat people are supposed to follow (24 hours of the day, seven days of the week) is "try to lose weight." Every moment of life as a plus size person should be spent trying to be not-plus size.

Emily Dominguez, fatshion blogger of Amply Emmy, says that her favorite form of rebellion is "being fat and not wanting to lose weight."

"Here, I'm eating a salad because ~GASP~ I actually enjoy salad," she tells Bustle. "I'm so tired of people who assume that eating anything remotely 'healthy' means I'm on a quest to reduce the size of my body."

Taking care of your body in the ways that feel right to you is important. But more important still, perhaps, is recognizing that losing weight isn't right for everyone. And you can definitely opt out.

Bertha Chan, the blogger behind Curvasian, made it her mission to be proudly fat at a recent boat party she attended. "I was the only plus size person on it, and it always terrifies me," she admits. "Nonetheless, I went wearing a deep plunge swimsuit, I posted [a photo online], and my IG went crazy on that one pic!"

When she analyzed why the photo went down so well, she comes to the conclusion that it's because of the rule-breaking fiesta within it. "I was wearing something daring, even for a straight size girl," she tells Bustle. "And I was having a good time posing with a bottle of champagne and a ton of popcorn after a swim, being sexy AF as a fatty, drinking alcohol, and snacking all in one."

So try not to feel pressured into covering up this season. Be your free, fabulous, and fat self, instead.

So you go to the beach, or the pool, or the backyard barbecue and all your thin friends are taking the opportunity to catch some rays and tan their bods. You, however, are meant to keep the towel on. Right?

Nah. Fashion and beauty blogger Lisa Böhm of Girl Geek In A Dress highly recommends "sunbathing in various states of undress in a public park or shared garden."

She tells Bustle that she used to keep her jeans and T-shirt on throughout the summer, even if those around her were disrobing. "Now you [can] find me in any state, from strappy top and skirt up to a bikini in the shared little park behind our house, enjoying the sun."

She adds that "the world still turns." From her experiences, no one has ever batted an eyelid about her half-nude figure. Even if they did, it wouldn't have to be her problem, though.

7. Fat Girls Should Only Wear Clothes That Make Them Look Smaller

Jessica Kane, co-founder and Chief Creative Officer of plus size retailer Society-Plus doesn't think it's her duty to shrink. When asked what rule she thinks folks should strive to break this year, she tells Bustle, "STOP wearing clothing that makes you look smaller! You are deserving of the space you occupy and can wear it proudly, don't hide [...] own the room!"

Whether you've always dreamed of wearing a tutu, or are simply fed up of black-on-black ensembles, just go for it. Remember that no one would likely take issue with the outfit if it was warn by a thin person. And that's a reflection on rampant and harmful fat-phobia — not on you.

Bralessness has been a pretty big trend among straight size humans on and off for decades. But when it comes to fat babes with non-perky boobies, the look is generally supposed to be avoided. After all, no one wants to see the outline of saggy tits — or so we are told.

Sam Roswell of the style blog Fatty Boom Tatty thinks that's BS. "Sheer clothes, no bra, is a first for me," Roswell tells Bustle. "Just because my belly is round, doesn't mean my boobs are." Nor do they have to be.

What's more is that they don't have to be hidden, either. Wear what you want, how you want to wear it.

Writer and plus size model LaTanya Showers thinks the only fashion "rule" that should be given any credence is to wear whatever the hell makes you feel good. "They say plus size women should not wear a two-piece," she tells Bustle. "I wear what I want!"

Swimwear trends are constantly changing. Cut-outs are in one season, high-waisted bikinis the next. Then there are plunging necklines or off-the-shoulder tops. Whatever the "in" look of the moment, plus size babes are fully worthy of participating.

Plus size bikinis are slowly but surely becoming more common. However, the styles are more often than not high-waisted. Cute and retro, sure, but not super diverse. And the takeaway can still feel like, "Fine, you can have a bikini. But don't expose your stomach."

"I felt courageous a few years ago when I first wore a fatkini," she tells Bustle. "It was a top with a lot of coverage and a skirted bottom."

Over the years, however, her bikinis "have gotten incrementally smaller with less fabric and coverage. I've never made the break to a full-on teeny tiny bikini until this year and freeing my stretch-marked belly from my high-waisted bottoms has felt liberating, glorious, and rebellious. I love feeling the sun on my skin, the shimmy of my soft body in the water, and exposing more delicious curves."

We've all heard it before: The jiggle of that belly is unsightly. The wobble of that double chin is gross. The bounciness of that bum is not suitable for public consumption.

Truthfully, whoever decided as much was a fool. Model Alexa Raegun thinks that "dancing and moshing to your heart's content no matter your size, space, clothing, etc.," is one surefire way of filling yourself with joy while simultaneously saying eff-the-haters. It's fun, it's liberating, and it'll make a statement.

12. Fat Girls Should Shave Everything

Fat women are generally expected to perform some derivative of hyper-femininity, almost as a way of apologizing for their size by proving the profoundness of their womanhood in other capacities. One way of embracing all things hyper-feminine is to shave everything, always.

She tells Bustle that she suggests folks "vacation alone and love it!" Loneliness doesn't always have to be a bad thing, whether you're fat or not.

Something about seeing fat arms, chins, chests, bellies, or any rolls in the upper half of the body really seems to grind some people's gears. Like any kind of fat bias, however, this is rooted in nothing of substance and you don't have to cater to BS prejudices.

The truth is that breaking the supposed rules for plus size living isn't always risk-free. Some folks might stare at you. Others may laugh. Others still may point, giggle, or make pig noises at you as you walk past.

In the face of fat shaming, however, the above humans are good at remembering that they haven't done anything wrong. Quite simply, people can be assholes sometimes (or, a of the time). All you can do is refuse to shrink, refuse to apologize for taking up space, and live in such a way that your beautiful, fat bod is treated like the glorious friend that it is.