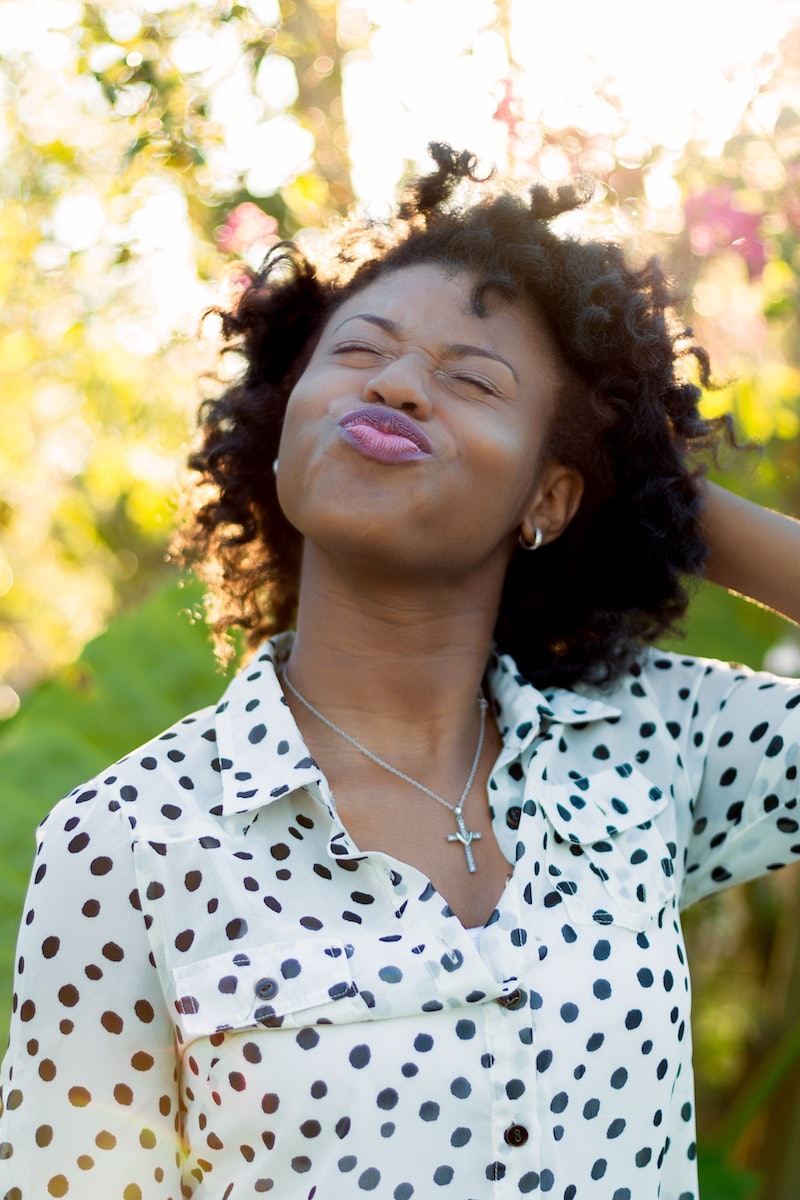 This past weekend, I made one of the biggest decisions of my life. I decided to start anew with myself and all of my hair would have to go in the process. It was time, and like many women I felt the weight of the hair being my "crown" came with a lot of emotional weight I needed to let go. I'm not just talking about frustration after your twist-out didn't turn out as planned, but that my hair was a safety blanket. I realized, finally, that I was wearing it more for other people than myself and I let their fear influence why it stayed put.

But one day, I had enough. I was tired of how other people saw me and how different I felt on the inside. I had toyed with the idea for years, and I have the Pinterest boards to prove it. I picked up the phone and called a unisex salon under a friend's recommendation and made the appointment. I wasn't even sure I was ready until I was sitting in the chair, but something in my gut said, "Just do it." Surrounded by friends and their phones out to document the experience, I did it.

The melodrama that followed was akin to those old episodes on America's Next Top Model where the one girl with really long hair was asked/forced to cut it. Of course, Tyra Banks is always right about it bringing out the right features. But that doesn't make it any less damn dramatic. Similar to Issa Rae's show on HBO's Insecure, it is a roller coaster of emotions worthy of two seasons on television.

1. The feeling of post-chop shock that just won't go away.

I'm going to stick with, "It's just hair, until you don't have any." As someone who wore hair past my shoulders, this would definitely be an adjustment.

You had the audacity to go there, and that level of grown woman badassery feels amazing. Go you!

3. Facing the awkward encounter with friends who don't recognize you.

So, my face changed, too? And maybe it did. Ugh! How annoying.

It doesn't feel real until you're in the shower feeling around for hair that isn't there. I was positive this was the right move for me, but I can't say I'm 100 percent comfortable just yet.

5. Being angry by other people's shock/disappointment.

Seriously? In some ways, it is just hair. It's not like you don't already feel weird about it. Everyone else just needs to keep their opinions to themselves at this point.

Oh, god! Somebody please like me. And stop asking me, "How do you feel?" The answer: I really don't know. But be nice about it!

You keep telling yourself you're a grownass free woman, but beat yourself up for succumbing a little to the shock.

8. Finding every reason to look (or not) in the mirror.

Yes, this happened. But being ready to face the music is an entirely different issue. So instead, you call all of your friends and family to talk about it.

9. Realizing all of the baggage you had elsewhere.

It's like one day everything seems like it fits, and you get a hair cut and ... BAM! Suddenly, that top you bought is hideous and none of your jewelry fits your new face shape.

Yes, because that is the exact reason every black woman cuts her hair. *Closed mouth screams*

11. Responding to, "Are you going through something?"

The answer is yes, but aren't we all? Yes, you cut your hair but people deal with things differently. Next question.

12. Being shy or self-conscious about your attractiveness.

It's like learning to ride a bike and the training wheels coming off immediately. You're on the bike, but the idea of face planting on the pavement is always a reality. Feeling ugly is a reality.

13. Getting excited (when you aren't in shock).

The right selfie can make you feel like a complete sex symbol ... even if you've taken the same one 30 times. This is a whole new world.

14. Feeling at peace that you stuck with your gut.

Cutting it presents that nagging feeling. You've gone back and forth with yourself about what to do and how to do it. Now that it's done, it's OK to feel proud that you stuck with your vision.

15. Being relieved the fireworks are over.

It's a little anti-climatic. After the first few snips, the fact that it's done and you survived is a bit of a relief. Now, you can just focus on the new journey ahead.

More like this
3 Zodiac Signs Most Likely To Be The Center Of Attention
By Nina Kahn
Bustle Newsletter: September 26, 2022
By Stephanie Talmadge
Help! I'm Not Getting Any Attention On Dating Apps. What Can I Do?
By Sophia Benoit
Berriez Founder Emma Zack On Her Size Inclusive NYFW Show
By Dominique Norman
Get Even More From Bustle — Sign Up For The Newsletter