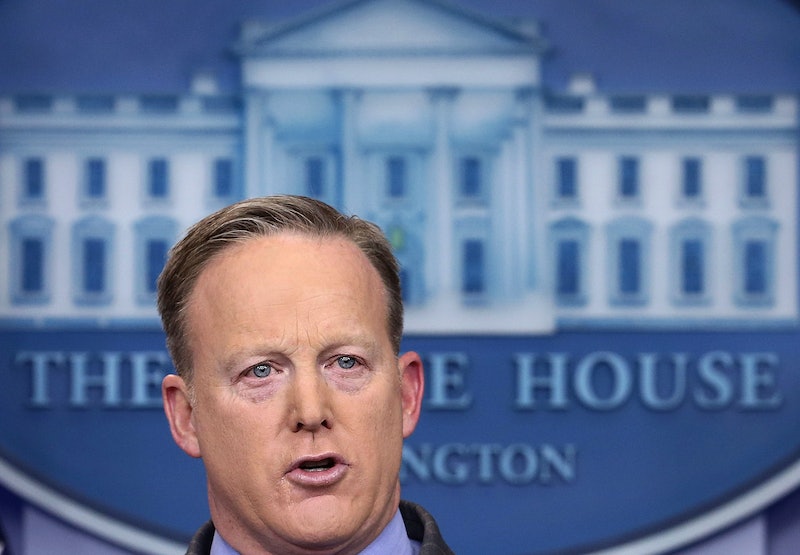 You can always rely on the internet to serve up the jokes. The latest trend? "Alternative facts" memes inspired by Sean Spicer, Trump's press secretary. Following Spicer's Saturday press conference, in which he (wrongly) asserted that the crowds at President Trump's inauguration were "the largest audience to ever witness an inauguration, period," Counselor to the President Kellyanne Conway appeared on NBC's Meet the Press and characterized Spicer's improbable claims as "alternative facts." As the 15 examples below will prove, the memes spread on social media responding to this quote through the hashtags #SeanSpicerSays, #SeanSpicerFacts, #SpicerFacts, and #AlternativeFacts are hilarious.

During a speech at the CIA on Saturday, President Trump explained that, from his vantage point, his inauguration crowd looked like "a million, million and a half people." He also criticized an unspecified television network for estimating the turnout to be roughly 250,000 people, a figure he felt was too low and "a lie."

According to the Washington-area transit authority, 570,557 people used the D.C. Metro system on Friday, roughly half of the 1.1 million people who did the same during President Obama's 2008 inauguration. Aerial photos of the fields in front of the Capitol showed notably smaller crowds for Trump's ceremony than those from both 2008 and 2012.

Given multiple pieces of concrete evidence proving Spicer's statement false, the internet thought it was only fair to play with some other inconvenient realities.

So quit saying he tans too much.

2. Just Think Of It This Way

And tell everyone you know.

The press conference Spicer gave on Saturday was just a chat between friends.

Get your eyes checked if you didn't realize this.

6. Step Your Math Game Up

Trump's method of making calculations is just ahead of its time.

Really proves how humble Trump was to keep these accomplishments secret during the election.

9. Melania Always Knows What To Say

Truly the most quotable first lady.

10. These Slogans Are Everything

12. You Thought They Didn't Exist?

Here's the photo you wanted.

Trump ASKED those crowds to go.

15. I'm Believing This For The Next Four Years

And you can't prove me wrong.