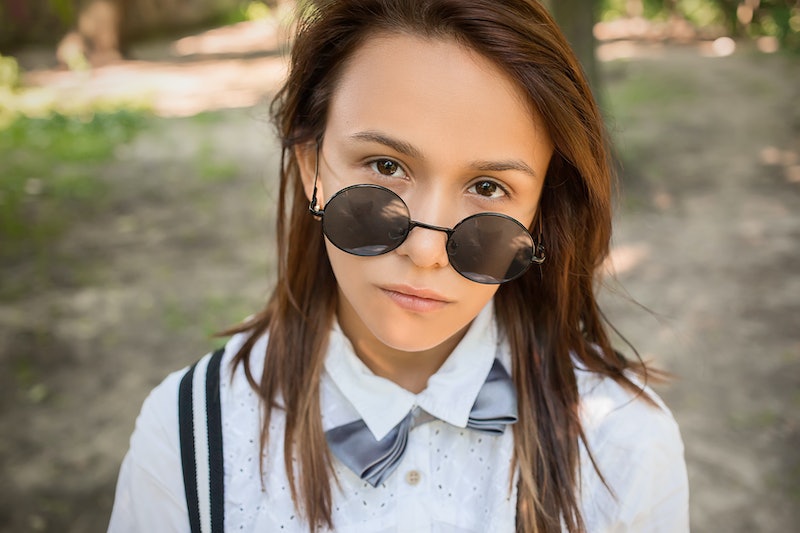 So many women are slut-shamed. Even women who aren’t sexually active or sexually promiscuous in any way experience slut-shaming. “Slut shaming is so prevalent because it always has been," sexologist and author of Single But Dating, Dr. Nikki Goldstein, tells Bustle. "For generation we have been shaming women for their sexuality and now with the media world it has become more acceptable in a way because the word "slut" nearly feels like a norm.”

It’s not just when we’re children or teenagers that we experience slut-shaming. It happens throughout our lives. It doesn’t matter if we’re sleeping with lots of people, no one, if we’re single or married. We still come in contact with this behavior. “It impacts woman because they might be acting on their own sexual desires or exploring their sense of self and are told by using that word that they are bad for doing so," says Dr. Goldstein. "They are experiencing something possibly positive and beautiful and then made to feel guilty for it. It can be very damaging to women and also very conflicting.”

Because we all need to hear this: Here are women on the very real times they remember being slut-shamed.

“One time I was at a bar in my favorite SEXY SILK ROMPER and this douche lord starts talking to me. We talk for a bit then are like silly dancing and he decides to just shove his tongue down my throat. I push him off and say I don't like PDA and he responds by going "if you don't want guys to do that then don't wear sh*t like that."

“I started a comedy blog as a way to have a creative outlet and explore my comedy skills in a new way. I ended up writing a lot about my experiences and thoughts on dating in NYC. While a lot of people appreciated the humor and didn't take my writings too literally, there were others who took it way too seriously. This one guy who liked me told me I'd be an embarrassment to take home to his family (not that I was trying to date him anyways).

I ended up shutting down my blog. And by "shutting down my blog" I mean I put it on private so only I can see it and I do live readings to friends when I feel like hamming it up with some crude humor. To most people, I've matured and no longer make sexual jokes. But really I've just learned who I can be my real self around and not feel shamed for it.”

“When I was younger, like middle school, I'd wear whatever I wanted to school — we didn't really have dress codes, and obviously, my mom let me leave the house so whatever I was wearing wasn't all that bad — and pretty much every day, and this one TA would yell at me and tell me to change and tell me I was too "provocative" or whatever. I WAS 11. I didn't even have [boobs] yet.”

“When I was 12 I went to the movies with some boys and girls. Someone wanted to know what it was like to kiss and I was game to show them. Then two other boys wanted to know what it was like and I thought all three boys were decent fellas (which I would still hold true for them now) so, I didn't see any reason not to share this experience with them. Like why not.... well why not is because some of us were in "relationships" with other people and cause I would be the only person to get bullied so intensely the next day that I'd need my mom to pick me up from school.”

“As a sexologist I endure "slut shaming" on a different level, a professional level. When people meet me and I tell them what I do I in turn snickers, laughter, and comments about how it is not a real career. But the worst of it is when people try to imply that my experience/ training in the profession had to be straight from my sex life verses the countless classes where I spent hours reviewing scholarly literature, money as well as time investing in professional organizations or submitting to national conferences, miles marched for Reproductive Justice & Equity and countless times my ideals are rejected. It really frustrates as although it is a small micro-aggression it is still blatant slut shaming not only towards me but also to those in profession who provide help to individuals in need.”

First : I had sex pretty early on (14 years old), I always was very mature, so when I felt like it was time, I just f*cking did it. But I never talk about it and usually lie about it when asked. Society and people in general make you feel uncomfortable about this. Second : I had more than 20 sexual partners (I'm 24) and again I rarely talk about it or be honest when asked because they say "it's too much" if you dare to say it. Especially if the guy you're with had less partners, if short minded/not very smart, he's definitely going to say that you are a slut, but let me just tell you that I can do whatever the f*ck I want with my body!

“I was in college and dating my last boyfriend. It was December and we were about to leave for a holiday party. I had this amazing sparkly dress — a dress so sparkly I knew I'd never wear it again — and I felt like a bedazzled dream. As we were opening the door to leave, he noticed how short the dress was. He asked me why I was trying to look like I wanted to f*ck everything in town.”

“Unlike most people, I started experiencing slut shaming much later in life. When I was younger, I was much too preoccupied about following the rules and making sure people thought well of me that I never dared to express my sexuality in any bold way. Since becoming a Dominatrix at age 55, however, all of the slut-shamers out there started making up for lost time. I get hateful comments about the way I dress for photo shoots, the elements of sexuality in my work (even though no sex ever takes place between a Domme and a client), and especially for my age—people are incredibly uncomfortable with the idea of a woman in her 50s or 60s who's really in touch with her sexuality, and they react with fear and hate.

One particular email I received sticks in my mind that came from a woman who told me I needed psychiatric care for speaking publicly about couples swinging. I never let messages like this get me down for too long. I just have to remember that it's because of people like this — repressed, angry, holding themselves captive with all of society's social rules—that the work I do is important. What's more, as a Dominatrix, I found some of the most supportive and incredibly open-minded people I've ever met, and their friendship is worth a whole lot more than the self-conscious accusations of a slut-shamer any day. “

“I was walking over the Manhattan bridge with a friend one day and this one guy started coming towards me and i was like oh no, so I kept having a conversation with my friend and he kept coming towards me and he started saying things like oh baby you’re so hot i love your [boobs] do you wanna f*ck etc and he grabbed my hand and kept trying to touch my hip and instead of reacting to it at all i just removed my hand and tried to ignore it. I walked faster and just kept going with my conversation because i didn't want to egg him on.”

“As a therapeutic exercise for myself I tried to remember and write down everyone I've had sex with. My ex found it and yelled at me even after I told him why I did it and that everyone was before him. In college when a sorority tried to recruit me they tried getting me drunk to find out how many people I had slept with to see if I met their standards of purity. My whole religious schooling was grounded by slut-shaming and shame. I couldn't have sex, I had to wear long skirts and baggy pants. I couldn't even hug a guy without getting in trouble by the disciplinarian."

"When I was 12, the outfit I was wearing to my local youth club was too provocative (apparently being an early bloomer is offensive) and was made to stand in a corner with four (male) teachers around me, in front of a whole room of my friends, as they tried to find something 'more appropriate' for me to wear. ( I was wearing jeans and a long sleeved black top which was slightly sheer, so you could kind of see my bra).

“When I was studying abroad in Athens, Greece (back in 2007) I lived with four other girls. We only had one spot in the apartment that had Internet and there was one roommate, let's call her Janet, who parked her laptop at the desk and took it over everyday. We never knew what she was up to until the last week of the program — she was blogging about all of us. Since we lived together, she knew when we would come home. I was off having a romantic fling with a Greek man who lived downstairs, going out and partying. She embellished the story ON THE BLOG saying I was doing drugs and sleeping around with locals (neither of which happened). She ended up going after the same guy once I kicked him to the curb. Once we found out about the blog, all roommates confronted her and I personally stood over her while I watched her delete it from the Internet. She was using our real names, too.”

“For many years, I wrote about my dating life on a personal blog and for some larger magazines. Though I mostly talked about love, self-love and how to form healthy habits as I ventured through the often confusing (and infuriating) dating scene of NYC, sometimes I'd talk about sex, too. I've never been a big one-night-stand gal, but I did talk about a few (totally hot and romantic) adventures I had during travels. Of course, this information was on my blog if you search my name. I had what I thought was an awesome 5-hour date, where we couldn't stop talking — but something quickly changed the next day, when I texted him to plan the second date he kept referencing. A few days passed and I had figured he was another ghoster, but I received something along the lines of 'I couldn't date someone who is so open about their dating life and sex life. It just doesn't feel right to me." I responded in a cheeky way, but also a proud one: Not only was I always careful to never use names, but with any boyfriend, I'd always talk to them before writing about them. And hey? A girl who enjoys sex and isn't ashamed about it? That sounds like a hell of a better person to marry than someone who is only into missionary and lights off. Just saying.'”

Women far and wide experience slut-shaming. It's something we ladies experience on an almost universal level. The only way to stop this behavior is to teach our own children to respect women and treat them as equals.

It may sound cheesy, but we really do have control over the future. And remember, if you've experienced slut-shaming, you're definitely not alone.