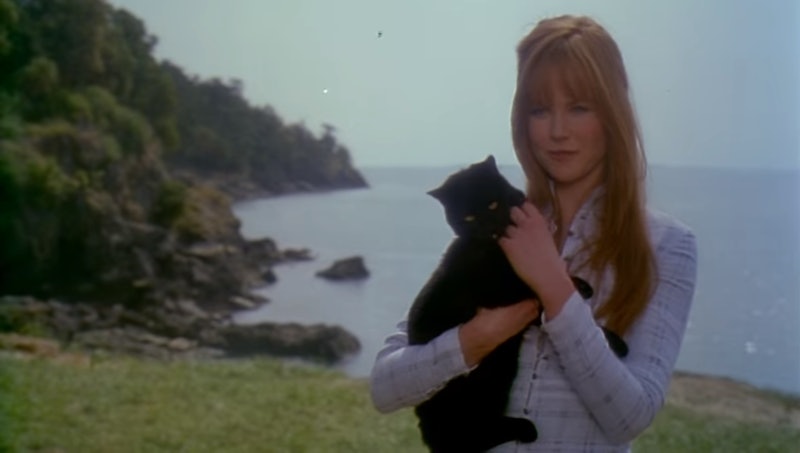 There are two types of scary movie fans — those who go all in and watch Saw and The Exorcist while screaming gleefully, and the people who want to be pleasantly frightened, but still able to fall asleep after the credits roll. If you fall into the latter category, then you might be looking for some low-key terrifying movies to watch this October, as opposed to ones that could potentially scar you for life. Fear not, because there are movies that are just scary enough to send a tingle down your spine without inducing long-term nightmares. Next-level horror movies are fun and all, but they're not for everyone.

Instead of gore and oppressive grimness, opt for horror comedies like Practical Magic or atmospheric masterpieces like Let the Right One In. These movies will scratch your itch for Halloween scares, and in some cases, let you indulge in some serious nostalgia. If you want to be at least a tiny bit terrified, then you might want to watch a movie that has more bite to it than Hocus Pocus, even though you're in no way prepared to sit through IT just yet.

Thankfully, Hollywood has done a solid job of providing movies that fall in-between full-on terror-fests and kid-friendly holiday fare. If you're looking for some cinematic Halloween shivers, queue up one of these movies that will leave you feeling pleasantly spooked.

Anjelica Huston's performance as a witch that lures children away with candy terrified you when you were a child, and it will still give you chills now that you're an adult. This is one movie that only gets scarier with time — and yes, the witches' true faces are still pure nightmare fuel.

There's definitely a bit of gore in Let the Right One In — one of the main characters is a vampire, after all — but this atmospheric tale is also about the power of young love. It's perfect for someone who wants their horror films to have a beating heart.

What's not to love about a movie where Sandra Bullock and Nicole Kidman play sisters with magical powers? There are just enough jump scares to qualify Practical Magic as a spooky film, but it's mostly a story about the power of sisterhood.

4. Shaun Of The Dead

Despite how often it makes you laugh, Shaun of the Dead is genuinely frightening. However, Simon Pegg and Nick Frost's tag-team comedy style leaves you feeling safe, despite the massive amounts of zombie carnage going on around them.

There's nothing better than a good old-fashioned ghost story, and this Gothic tale hits all of the familiar beats. There's a creaky mansion, a mystery to be solved, and some unfinished business that needs to be taken care of — creating a movie that will make you shiver without interfering with your sleep.

John Boyega's star power was evident long before he joined the Star Wars universe. His role as a teen protecting his turf from an alien invasion in London is proof positive that he was born to be a leading man.

The Innkeepers is a slow boil ghost story that feels like a quirky indie film right up until the moment that everything falls apart for the movie's ghost-hunting hero.

It Follows is definitely not for the easily scared, but it's not exactly The Exorcist either. The idea of a sexually transmitted ghost is both spooky and thought-provoking, and even though it may be a bit scarier than the other films on this list, even horror movie novices can enjoy its feminist themes.

Based on Henry James' The Turn of the Screw, The Innocents is an old-school psychological thriller that will never lose its power to leave viewers chilled to the bone.

Even though it's more of a comedy, Beetlejuice is full of scary imagery that you may have blocked out. You'll laugh, but you'll get a few genuine spooks too.

A visit to Hill House is just what your Halloween needs to add a dash of horror to the holiday without going overboard.

The Shining is straight-up terrifying, but this documentary about The Shining is a fascinating exploration of the conspiracy theories surrounding the movie. You'll come away with an even deeper appreciation of the classic film after watching this unnerving doc.

"Light as a feather, stiff as a board" — this is the perfect time of the year to revisit the coven that taught you one of the spookiest sleepover games ever.

This movie may be aimed at kids, but alternate universes full of people with button eyes is scary no matter how old you are.

This eerie, don't go into the woods film is underrated and unsettling — especially if you can go into it spoiler-free.

Sometimes, the real horror comes from the unknown, as this clever film proves with its story of paranoia and isolation.

Grab a friend and watch one of these low-key terrifying movies with the lights off this Halloween — or leave them on, because even a little horror can go a long way sometimes.

More like this
These 25 International Horror Movies On Netflix Prove Fear Is A Universal Language
By Bustle Editors
Here’s Everything Coming To & Leaving Netflix In October
By Jake Viswanath
What’s New On Netflix: Ana De Armas’ 'Blonde' & A Nick Kroll Special
By Arya Roshanian
Florence Pugh Reflected On Her ‘Don’t Worry Darling’ Experience On Opening Day
By Brad Witter
Get Even More From Bustle — Sign Up For The Newsletter