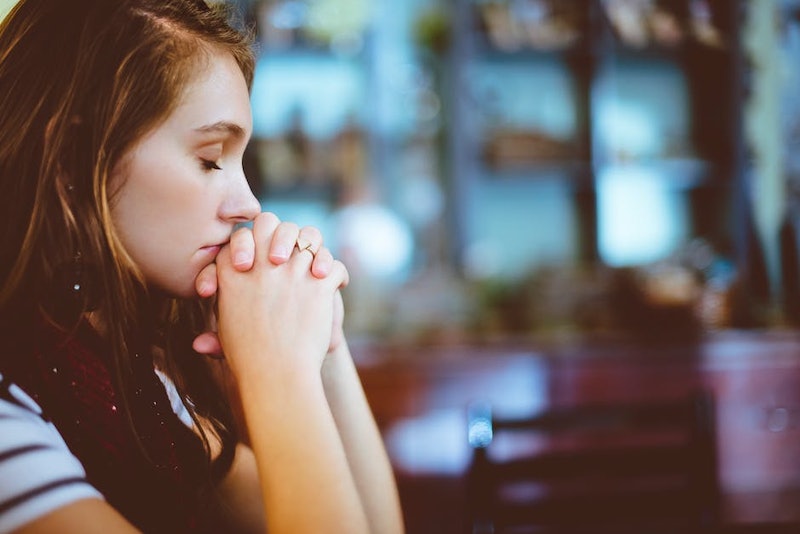 A lot has changed in the six months since Donald Trump was sworn into office, both on a political level and a personal one. Bustle’s State of Our Unions series looks at how millennial women's relationships with their friends, family members, and romantic partners have been affected since the 2016 election. Today's topic: millennial women on how their stress levels are changing.

The results of the 2016 presidential election threw large swathes of the country for a massive, enormous loop. Whereas many believed that January would see the swearing in of the first woman President of the United States, we ended up instead with Donald Trump as Commander in Chief. As a result, many of us — millennials in particular — have found that our stress levels have changed since the election in some dramatic ways. Indeed, “some dramatic ways” is actually putting it mildly; for many, the correct term is “skyrocketed.”

According to the American Psychological Association’s report Stress in America: Coping with Change, which was released in February of 2017, a full two-thirds of Americans say that they’re stressed about the future of the country. What’s more, that stress isn’t necessarily split along party lines. Although it’s true that Democrats, at 72 percent, are more likely than Republicans at 26 percent to peg the election results as a “significant source of stress,” people from both parties report that the future of the United States is a significant source of stress. For Democrats, the percentage of people who feel this way is 76, while for Republicans, it’s 59. Overall, 57 percent of Americans report that the current political climate is at least somewhat a source of stress (and, in some cases, very much a source of stress); meanwhile, 49 percent of Americans also say the same about the outcome of the election itself.

Millennials in particular are feeling the burn; many, if not most, of the changes the Trump administration and the Republican-controlled Congress are attempting to push through will affect the younger generations the most. We don’t know if we’ll continue to have affordable access to essential health care; whether our kids will benefit from a robust public education system or suffer from a failing one; whether all citizens will have equal rights, regardless of gender, sexual orientation, race, or disability status; or how countless other issues and concerns will shake out — including whether or not we’ll even still have a planet to live on within the next few years.

Here’s how 19 millennial women say the election has affected their stress levels. It’s an eye-opener — and it’s a reminder that we’ve got a lot of work ahead of us to keep fighting for what we believe in.

At this point, I'm certain I'll witness an environmental apocalypse in my lifetime. I was always on the fence about having children, but now I'm definitely not going to. Why would I want to bring a new life into this?

I have a fantastic job I love with a very small company — unfortunately this means I'm unable to receive health care from my employer. Since Trump was elected, I've been trying to book as many doctor's appointments as I can while I'm still covered by my parents' insurance. I'm so scared I won't be able to count on the ACA for affordable coverage in the next few months.

As someone with diagnosed anxiety, my stress level has always been pretty epic. Trump taking office has only added to that, not only as a woman, but one that has plenty of pre-existing conditions. I've never felt so unclear about the future of my well-being, the well-being of others, and the future of our nation and world; and the constant bombardment with news and tweets and headlines and scandals that are impossible to tune out are making a manageable level of stress unmanageable.

...The huge upswing of (or should I say, boastful resurgence of) hate this guy is bringing to surface. I'm a non-white, but I'm very light skinned. I have walked through life as a white person, so I've seen racism on both sides. And one thing I will say is it never went away, but geeze, did your good old boy attitude swing up where you [didn't] expect it. As a woman, I'm scared all the time. I'm scared for reproductive rights and jobs and justice.

As an Indian-American woman, I see myself being more self-aware of the way people might perceive me or my family. I've had increased anxiety about what could happen to my family, especially my brother living in South Carolina with Confederate flags in his neighborhood. Discriminatory crimes against certain races, religions, and ethnicities have increased with Trump's divisive and ignorant statements. With every incident or death reported to the media, my stress level rises even more out of concern.

I live with the fear and stress that Trump may take my rights away, and not just for myself, but I am more fearful for the generation that is growing up after us. This fear becomes stress that sooner than later I won't be able to have my voice as a woman and that men will delegate what I can and can't do with my own body.

I find myself in a constant struggle between wanting to remain informed and actively resist, or choosing to ignore (aka ignorance is bliss); I feel helpless as I see media clips detailing the ignorance that an alarming amount of my fellow Americans support. I stress over the future that is being created every day by the man that acts as our President, and how that will affect my 10-year-old son. I worry as I see America and our citizens as the ultimate losers in this whole situation, no matter your political affiliation.

The election was a traumatic event for women in this country. It's left myself and my friends with a palpable increase in irritability and stress. From the moment Trump was elected, I have felt increased persistent anxiety about what the election means for the future of my rights, sovereignty of my own body, and the future of our planet. There is a daily sense of dread, triggered each time he speaks that makes you feel like things are beyond your control.

Like many people in this country, my life has been impacted by the United States election results. Shortly after November, I started to notice that I was constantly in a bad mood and was short with the people I care about — both at work and in my personal life. One day after a particular instance where I snapped at my boyfriend for a mundane reason, it dawned on me that my overall mood was being influenced heavily by Trump. I work in public relations so it's my job to stay on top of everything that is happening in the world, but doing so was bringing me down. The media landscape has changed so much with our current administration, making news about Trump inescapable. It's more common than ever to hear about Trump in every facet of my life. I now try to focus on straddling the fine line of being informed while also protecting myself from getting too upset or stressed.

My life has been turned upside down with stress and worry as I constantly think on whether my immigrant-Nigerian husband will be stopped and harassed or threatened with deportation on any day. We run our business together and while our clients have never questioned whether he has a green card I do fear that the question will arise in the near future. Fear of travel to visit his home country or any vacation spot has made this entrepreneurial rat race even MORE stressful.

I've been more stressed since the election because the new president's attitude about women and immigrants seems to indicate it's [going to] be harder to find a job. I intend to work in the media industry, which is already very competitive. Trump is only making things worse.

He has nothing but increased my reasoning to become a self-sufficient money-making machine so that my legacy can live on without having to rely [on] such a corrupt government. In other words, my stress levels are on high alert with an increased sense of urgency to get things done!

I’m not the only one whose chest gets tight every time they see Trump and Twitter in a headline. As an avid traveler I worry about the world views of Trump. In a recent visit to Canada, that’s all anyone would ask me about once they heard my American accent. I vacation to get away, not to be followed by this political nightmare. Previously, not a single person would ask me about Obama; they would, however, tease me about our health care system.

I teach at a school that serves a large immigrant population, and their fear due to this administration's policies is tangible and heartbreaking. I feel a crushing sense of powerlessness, and paralysis — do I focus on the dangerous health care bill, or his firing of Comey and the fallout of the Russia investigation?

Donald Trump in the political sphere — and everyone who supports him or corroborates him — reignites pain and trauma from my past. [...] It's like I'm constantly reminded of all the times my autonomy was stolen from me... and the whole country voted for someone who represents that. I have to talk myself down from fear and anxiety that my rights will be taken away... every morning, and every night.

Trying to find a job since the election has been very stressful. I have been trying to find a full-time job, but employers do not want to have to pay for benefits for newer, younger employees. If there isn't a company-wide hiring freeze, then you are offered a position as a "full-time temp" (meaning you work 40 hours a week with no benefits). Employers do not like turbulence, and since the election, it's been nothing but turbulence.

I'm an atheist mother of two girls and I work in education for a Title 1 school. We live in the southeastern United States. My stress levels have been in overdrive.

I've never been as politically or globally aware as I am right now, and to be honest, the world is frightening to me. Every once in a while I can't help but think where we would be if Hillary was in office and if I would feel more at ease that things would get better or be taken care of properly. I feel like we're all just walking on eggshells waiting for the next disaster to happen at any moment. And it doesn't help that I live in such a high-profile, targeted-in-the-past city where certain VIP family members reside on my block, just a few avenues away. So, yes, my stress levels have changed since the election.

I have bad anxiety to begin with. Since the election, I am constantly on high alert, afraid to turn on my TV or read the news, terrified of what the next big mistake our government has made is. I didn’t sleep the night of the election, and I haven’t slept soundly since.

More like this
Bustle Daily Newsletter: October 4, 2022
By Hayley Schueneman
Black History Month UK’s 2022 Theme Calls For Action, Not Words
By Maxine Harrison
Chris Kaba's Family Continue Fight For Justice After Viewing Police Bodycam Footage
By Sophie McEvoy
Here’s Your Daily Horoscope For October 6, 2022
By Mecca Woods
Get Even More From Bustle — Sign Up For The Newsletter