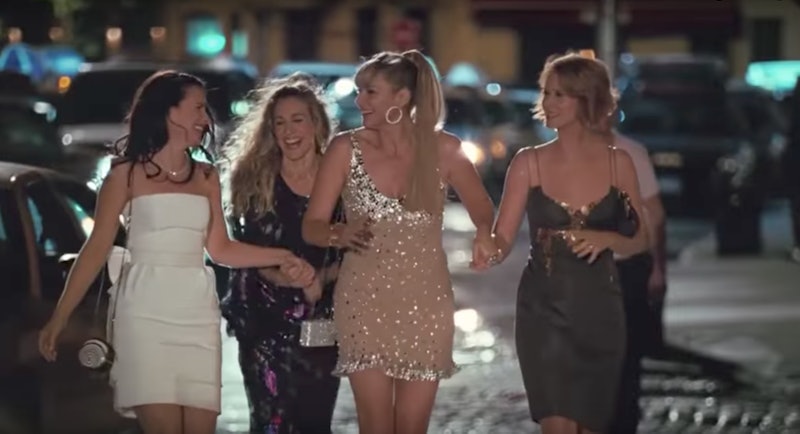 The on-screen magic of Carrie Bradshaw, Samantha Jones, Miranda Hobbes, and Charlotte York will undoubtedly remain ingrained in the hearts of SATC fans for many years to come. And even though the series may have come to an end more than a decade ago, there are actually quite a few quotes from Sex and the City that are still just as amazing today as they were 13 years ago. Fans can certainly attest to the fact that there was so much to be learned from this fearless foursome of ladies who unknowingly helped to shape many of us into the multifaceted human beings that we have become today. From the shocking tidbits about sex, to the ups and downs of love, and the do's and don'ts of fashion, Sex and the City always gave us life — raw, uncut, and unfiltered.

As one of the biggest feminist movements in entertainment, the scope of SATC and its characters helped to encourage and propel many of our dreams and desires. It taught us that it was OK to be single and be happy about it. It taught us that it was OK to be career-driven and focused on our goals while at the same time making memories and friendships that will last a lifetime. It also introduced us to New York City — not the scary and unsafe '80s version that our parents once made it out to be — but the fascinating and intriguing, newly rehabbed metropolis of the Big Apple. The feeling of watching Carrie, Samantha, Miranda, and Charlotte tackle those streets in their Manolo Blahniks was awe-inspiring to say the least.

Amidst the recent and sad news that the spin-off film series would not be producing a third installment, now is the perfect opportunity to take a look back at some of the unforgettable quotes from the franchise that have ultimately become words to live by for many.

1. "Being single used to mean that nobody wanted you. Now it means you’re pretty sexy and you’re taking your time deciding how you want your life to be and who you want to spend it with." – Carrie

Shout out to Carrie for reminding us that life is way too short to be spending it with the wrong people.

2. "Maybe we can be each other’s soul mates. And then we can let men be just these great, nice guys to have fun with." – Charlotte

Charlotte was definitely on to something when she realized that BFFs can be soulmates too.

Because sometimes it's actually hard to decide whether you're going to get the shoes or pay the rent IRL.

4. "Sexy is what I try to get them to see me as after I win them over with my personality." – Miranda

A great personality is one of the sexiest qualities a person can have. Although Miranda's sarcasm sorta overshadowed the notion in this moment.

5. “I don't believe in the Republican party or the Democratic party. I just believe in parties.” – Samantha

Samantha was all of us immediately following the 2016 election upset – in utter disbelief and ready to drown all of our sorrows in a vodka soda.

6. I've been dating since I was fifteen! I'm exhausted! Where is he? – Charlotte

Charlotte once reminded us that finding a partner can sometimes take longer than anticipated.

7. "And then I realized something, twenty-something girls are just fabulous, until you see one with the man who broke your heart." – Carrie

Breaking up is obviously hard to do, but watching your former bae move on with the next best thing can certainly hit you like a ton of bricks.

8. "I feel the same way about being a bridesmaid as you feel about Botox. Painful and unnecessary." – Samantha

For some, the mantra is true: always a bridesmaid, never a bride.

9. "The most exciting, challenging and significant relationship of all is the one you have with yourself. And if you find someone to love the you you love, well, that's just fabulous." – Carrie

Sorry, not sorry! Miranda proved that it's OK to live out your successes unapologetically.

That time Samantha used a major expletive to remind us all that age ain't nothing but a number.

12. "They say nothing lasts forever; dreams change, trends come and go, but friendships never go out of style." – Carrie

Carrie offered some ultimate words of wisdom when she explained that friendships are always fashionable.

13. “You have a lot of nerve telling me to get a wax. If you were in Aruba the natives could bead your back. – Samantha

That epic moment when Samantha called out the double standard in beauty practices. It goes without saying that yanking the hair out of your body is something no person should ever be expected to do.

14. "Beauty is fleeting, but a rent-controlled apartment overlooking the park is forever." – Carrie

Sex and the City was definitely a show that made all of us want to live in the big apple at one point or another. So it's certainly befitting that Carrie's guide to city survival be our ultimate guide.

No point in wasting time on dating the wrong person — relationships are all about reciprocity.

16. “If I worried what every b*tch in New York was saying about me, I’d never leave the house. – Samantha

Samantha never cared much about what other people thought about her. It was, hands down, a mantra that we should all learn to live by.

17. "Last night, Steve and I held hands for an hour and a half watching the fire. He was looking into my eyes, I was looking for the remote." – Miranda

Because very night can't be filled with romance, right?

18, "I will never be the woman with the perfect hair, who can wear white and not spill on it." – Carrie

Perfection is overrated... and unrealistic.

19. “Listen to me! The right guy is an illusion. Start living your lives.” – Samantha

Samantha was a total realist when she explained that there was no such thing as a perfect mate.

Whether it'd be 1998 or 2018, the trends set forth by Carrie, Samantha, Miranda, and Charlotte still continue to stand the test of time. And although the saga may be officially over for these iconic characters, it's safe to say that fans will never forget the impact that Sex and the City has, and will have, on this generation and beyond.

More like this
A New 'And Just Like That' Table Read Pic Confirms A Key Character's Return
By Jack Irvin and Grace Wehniainen
24 Years Ago, 'Friends' Dropped Its Most Underrated Ross & Rachel Episode
By Grace Wehniainen
Rhys Ifans Has A Good Reason For Keeping His Love Life On The DL
By Maxine Harrison
Netflix Reveals First Look At Wednesday In The 'Addams Family' Spinoff Series
By Bustle Editors
Get Even More From Bustle — Sign Up For The Newsletter