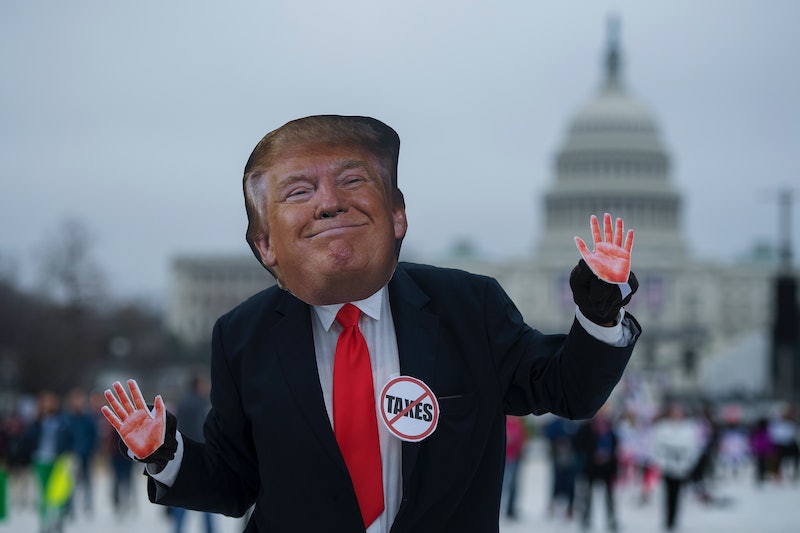 When used in the context of a protest or demonstration, signs serve many purposes. At the Women's March on Washington and its 600-plus sister marches across the world on Saturday, people are using signs to broadcast their reasons for marching, and their hopes and demands. Their signs are directed at their fellow marchers, the world bearing witness, and even to the new president himself. And from the look of it so far, some of the march's funniest signs are about Trump.

The Women's March on Washington's official mission and vision statement makes no mention of Trump. And yet, that Trump's election was the catalyst for it all cannot be erased from it. Signs featuring Trump remind viewers of that as well how he reacts to criticism. Some of the best signs out there are doing that with humor—something that, as Saturday Night Live has shown, particularly gets to the perhaps most social media-connected president our country has ever had. (Can't wait to see what he'll say about the massive crowds at these marches!) The new president has threatened before to make criticizing him more difficult, so why not spend today laughing at some jokes at his expense?

Here are some of the funniest Women's Marches signs about Trump. Side note:

Anyway. Let's get to it.

Gloria Steinem and Beyoncé are sharing some space at the march.

The Finest TV And Movie References

This One's For You, Trump

Hitting Him Where It Hurts

In Trump's Own Words

Trump's presidency representing a threat to freedom and safety for many people is at the heart of the Women's Marches, and what's at stake is serious. Still, it's good to see that humor hasn't been abandoned as the marches have gone underway.

And with the numbers of people gathering in the U.S. alone, it's no wonder there are a fair share of comedians in the crowds. There are no exact numbers yet on how many people are at the march in D.C., but estimates are already far surpassing those of Trump's Inauguration. And considering how much he has prided himself on being able to draw large crowds, the fact that the Women's March on Washington may be the biggest Inaugural protest the country has ever seen can't feel too good to the president right now. And these hilarious signs certainly can't be making it any better.